That was the last time I saw him 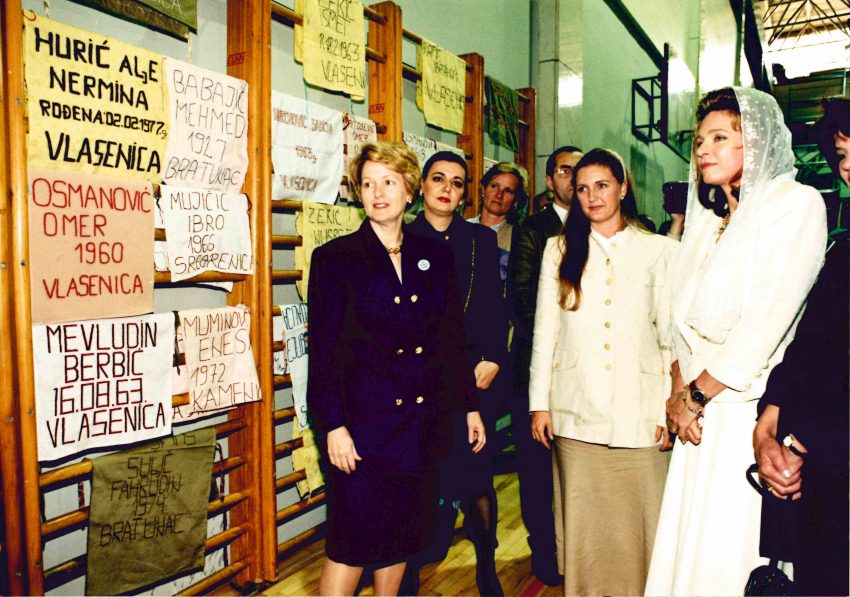 In spring 1994, while serving as US Ambassador to Austria, I hosted successful negotiations to bring together the Bosniak (Muslim) and Croat factions that were fighting each other while battling the Bosnian Serb army and paramilitaries. Backed by Slobodan Milošević in Belgrade, those forces had committed 90 percent of the war crimes in the small country of less than four million.

A year later, we received urgent calls at the embassy in Vienna warning of the imminent fall of the town of Srebrenica. Intelligence reports showed that the UN-designated “safe haven” was encircled by Serb fighters. I remember thinking of the oft-cited pledge in the face of that greatest of crimes, genocide: “Never again.” But this was “again.” On July 11, Serb forces began to slaughter 8,000 unarmed Muslim men and boys. At my grand mahogany desk, with my busy schedule, I was one of those policymakers doing too little too late.

A year later, at the request of the Bosnian ambassador to Vienna (herself a Serb)  I helped organize a Srebrenica commemoration with some 4,000 survivors. US military commanders, whose help we needed for protection from the defeated Serbs, insisted we invite the mothers of the perpetrators as well. Without hesitation, the Bosniak Muslim women accepted the almost unthinkable demand. One widow said four simple words that could shape history:

“We are all mothers.”

This was my introduction to Kada Hotić, who lost her husband, son, two brothers, and brother-in-law. She retells her story so others will understand:

“evil can happen everywhere, and to everyone.”

Using her first name, because of our closeness, I wrote about Kada and those deadly days in two books about the Balkans wars, Worlds Apart and This was not our War. I’m drawing from those works and several articles to offer these recollections of the genocide and its consequences.
The drama started in April 1992, when the hamlet of Srebrenica fell to Bosnian Serb paramilitaries who had overrun most of eastern Bosnia. Local Bosniaks led by Naser Orić retook the town three weeks later and heavy fighting continued over the next year destroying many Bosniak and Serb villages.

The Bosnian Serbs launched a counteroffensive, driving Bosniaks from surrounding areas towards hoped-for refuge in the beleaguered town. On March 11, 1993, when Philippe Morillon, Commander of the UN Forces, went to the small hill community, he was shocked by the suffering of more than sixty thousand people, many living in the streets or on rooftops.

During Morillon’s visit, the Bosnian Serbs halted their attacks. Worried that his departure would trigger more shelling, Bosniak women surrounded his vehicle to block his leaving. After hours of unsuccessful negotiation, Morillon accepted that he was trapped. He stood on the balcony of the local post office and declared:

“You are now under the protection of the United Nations…I will never abandon you.”

After Morillon’s unauthorized proclamation on April 16, the UN Security Council passed Resolution 819, designating Srebrenica a “safe area” for Bosniaks driven from their homes—to be protected by “all necessary means, including the use of force.”

The situation began to deteriorate immediately. Diego Arria, the head of a UN Security Council delegation to Srebrenica, named it “genocide in slow motion.”

A lightly-armed Dutch battalion was sent to protect the town, with the promise of close air support if they came under attack. The soldiers were stationed on the perimeter as a trip wire, with orders to retaliate only if they themselves were shot at—not actively to protect the citizens.

The Bosnian Serb commanders called the bluff of the international community, advancing, without opposition, on the “safe area.” When even the relative security of the safe zone was violated in July 1995, and Bosnian Serb forces moved into Srebrenica, the refugees—who had been disarmed by their UN protectors—were terrified. Kada recalls the excruciating choice:

“We decided we’d go with the crowd from Srebrenica to the UN headquarters at Potočari, ten kilometers up the road, where we’d be safer…But a bunch of young men figured they’d be killed if they stayed with the group. When we got to the gas station on the edge of town, they decided to make a run for it. My Samir, who was twenty-nine, was with them…That was the last time I saw him.”

Another woman, Magbula, had felt reassured by the UN’s pledge of protection after a year of living under siege. Then one day, she heard megaphones atop trucks circling the town. The Dutch troops were imploring residents to come to the UN compound. “I asked what was really going on,” Magbula told me, “and they explained that it would be easier to protect us all there. They said it was for our own safety.”

Instead of a refuge, in the darkness of night the compound became a scene from hell: random executions, rapes, wild rumors, and primal wailing. Wednesday morning, July 12, General Ratko Mladić, leader of the Bosnian Serb Army, came to the UN buildings for a carefully coordinated stunt, reassuring the refugees with water, bread, and words of calm. “He told us that he wasn’t going to harm anyone,” Magbula remembered. “He said, ‘You’re all going to go wherever you want. Don’t worry; you’re all going to be able to leave.’”

In the middle of the afternoon, twenty-five thousand Bosniak women were ordered by Mladić to take their young and elderly relatives and climb into a fleet of buses and trucks for the fifty-mile drive to Tuzla, outside of Serb-controlled territory. Magbula continued:

“That’s when they started separating men from women. And I kept telling them, ‘I want to go with my husband. Why don’t you take me with him?’ They kept reassuring me, ‘Don’t worry. We only want to interview him.’ That was the last time I saw him.”

Kada too, already separated from her son, who was her best friend, now stood helpless as her husband was taken away.

“There was a ramp with UN soldiers. They let us go through, and I felt a bit easier. Then as soon as we got past, a group of Bosnian Serb soldiers took my husband. I watched him go. He didn’t even look at me. We didn’t say goodbye.”

One month later, David Rohde of the Christian Science Monitor became the first outsider to investigate the crime scene. One image told the story: a human femur surrounded by bits of tattered fabric jutting out from one of several rich brown mounds of earth.

Meanwhile, in Tuzla, the survivors of Srebrenica waited in UNHCR tents set up on an airfield tarmac. Days passed, and accounts began to emerge: large groups of men and boys fleeing through the woods, only to be attacked with heavy artillery as well as automatic weapons; mass graves; and the bodies of loved ones left lying in the woods to be devoured by wild animals. Desperate mothers and wives stared into the trees, waiting for familiar figures to appear. An occasional one did.

One of the few escapees was an elderly Bosniak refugee, who said he’d been in a group of six hundred men corralled for execution. The men were trucked twenty at a time to a nearby field and machine-gunned. The old man was left for dead among the corpses but crawled out before the bodies were bulldozed into graves. Other than tales like these, the women knew nothing of the fate of their family members who had been left behind.

“We asked the government officials where the men were who had stayed behind in Srebrenica.” Kada says. “We went to the International Committee of the Red Cross and the Red Crescent. When they didn’t want to listen to us, we took to the streets and protested.”

Week after week passed. The women became desperate for word of their missing sons and husbands.

How could survivors move past such paralyzing uncertainty? Kada insisted incessantly that the International Criminal Tribunal for the Former Yugoslavia should not be prosecuting ordinary soldiers, but she was equally firm that commanders should be taken to court. Maybe then reconciliation would be possible.

Outside forces had ripped apart the world—families, communities, and country—of the women I interviewed. Postwar, they look back on a multicultural homeland that was a model of tolerance, and even today they long for restoration.

Twenty years after the genocide, I went to the heart-rending graveyard at Srebrenica. As a surprise for me, Kada appeared. We wove our way through a field of tall white Muslim tombstones, then we stopped at one. In June 2011, Kada Hotic was finally able to bury three small bones—the only remains that could be identified as her son.

As we talked over coffee, it was clear that for Kada, the answer was justice, not revenge. She said to me, simply, that if she hurt someone who wronged her, “I wouldn’t be me anymore.” I held her hand. I can only describe that moment as being in the presence of the holy.

During my last visit to Sarajevo, eight survivors came to meet me at the 7/11/1995 Memorial Gallery, which my friend Tarik Samarah runs to keep their stories and memories alive.

As we talked, it was inconceivable to me how those women have tried to defy trauma and create a new chapter of their lives among Serb neighbors in Srebrenica. They’re somehow putting aside memories of rape and torture to breathe life into a place of death. Some have planted crops in soil where their husbands and sons lie in mass graves. They’ve built organizations bridging ethnic divides. For those who have ears to hear, they are part of a global movement to change the way we halt and heal the wounds of war.

Kada is part of my life. I carry her with me.

“Everyone has suffered. When those men killed my son, they killed themselves. I forgive them, and so I live.”

Swanee Hunt served as U.S. Ambassador to Austria from 1993-97, when she became directly involved in U.S. policy in the Balkans. She is the founder and chair of Inclusive Security, a Washington-based nonprofit advancing inclusive approaches to conflict and sustainable security. She is the Eleanor Roosevelt Lecturer in Public Policy at Harvard’s Kennedy School of Government, where she founded the Women and Public Policy Program.

She wrote two books about the Balkans: This was Not Our War, Bosnian Women Reclaiming the Peace, and Worlds Apart: Bosnian Lessons for Global Security.