Not In Our Name: The Women in Black 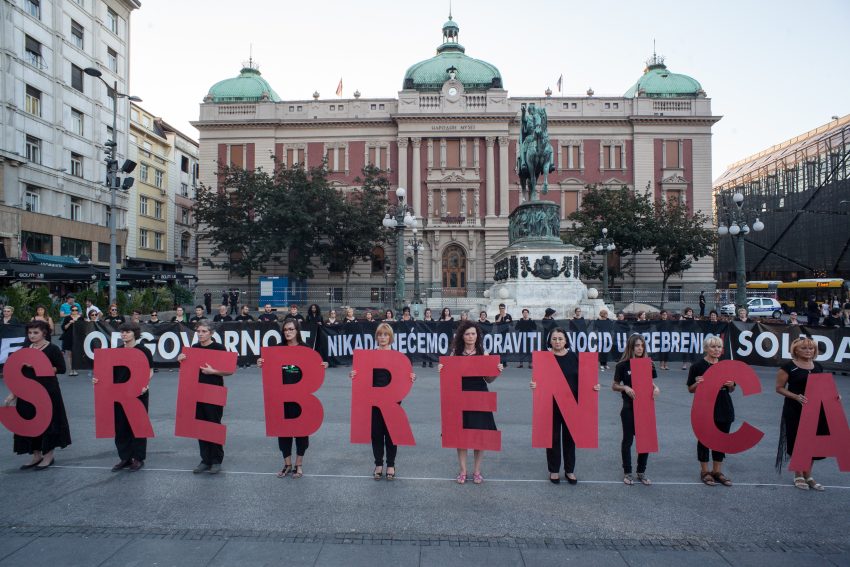 Could you tell us a little about the early days of the Women in Black in Belgrade? Why were you set up, and what was your aim in those early days?

Women in Black was founded in October 1991 as a direct reaction to the war and the aggressive Serbian political regime. We are a feminist anti-military group.

Our goal was to form a visible, non-violent resistance to militarism, war, sexism and nationalism, all of which we saw at play in the former Yugoslavia. We demand demilitarisation and disarmament as the only long-term peaceful solutions to wars such as in Yugoslavia.

We also wanted to create networks of female solidarity, peaceful coalition and alliance. We believed that our identities as women transcended national lines and provided opportunities for collaboration.  We have created a women’s alternative history, as women’s stories are so often unheard. We believe that the path to a more peaceful future is through education, so we have organised a permanent programme of peace education including inter-ethnic solidarity.

You have held more than 2,000 non-violent protests, demonstrations and commemorations in Serbia. All of your protests are held in silence. Can you tell us why?

Throughout the war, we would protest every Wednesday in the Republic Square in Belgrade. The goal was to publicly demonstrate our opposition to the war. At the time, our government was denying that it was even at war, so we also wanted to make sure that people knew that the facts. We refused to be lied to by our own people.

Even when the war ended, we didn’t stop.  We continued to go out into the streets – this time, to remind our government of the crimes that they committed and to fight against a culture of forgetting here in Serbia.
We use three symbols at most of our protests: the body, the colour black, and silence.

–  We use our bodies to create a physical presence, so that we cannot be ignored. We ‘kidnap’ public space from the dominant discourse of denial.

– We wear black as the colour of mourning. We mourn all the victims of the war, but above all we mourn those that were killed in our name.

– We protest in silence because silence is the most potent way to express our views. Silence symbolises respect, graveness and dignity: it is a space that belongs to others, a space without violence. Silence, when deliberately used, is the most powerful sound.

You have said that “It has been productive to make connections between violence in war and in everyday life, including the violence of homophobia, misogyny and racism”. Could you tell us a little more about how you see those connections?

Violence has many forms. These forms intertwine with each other and can often be difficult to separate. For us, it makes no sense to separate these different forms of violence. Separation leads to hierarchy, and this detracts us from the fact that we are fighting against the same thing. We do not believe that there should be a hierarchy of human rights. If we fight against one form of oppression, we must also fight every form of oppression. That is the only way that we can succeed.

That is why we organise commemorations as a sign of solidarity for the victims of crimes committed in our name. We organise feminist and community action events to raise awareness of male violence towards women. We organise anti-military action in solidarity with war refugees from all over the world, because we consider world’s problems to be our problems. We organise anti-racist action in countries that view the Roma population to be less worthy because of the colour of their skin. We organise anti-homophobic action in order to emphasise the major problems faced by homosexual people living in Serbia.

You have regularly protested about the denial of the genocide in Srebrenica. How big a problem is genocide denial? How have people responded to your protests?

Over the years, as Serbian authorities have changed, so has their position on the Srebrenica genocide. At first our government completely denied that the genocide ever happened. Then the strategy was of ‘interpretive denial’, arguing that that Srebrenica was not a genocide but a war crime. They reduced the number of those killed, and tried to justify this crime on the basis that crimes were committed on all sides – denial by ‘moral equivalence’.

Genocide denial is seen at all levels of society, from the government to the grass roots. In Serbia today, genocide denial can be seen in the refusal to accept the genocide verdicts of ICTY and the ICJ. A very small, almost negligible, number of people in Serbia recognise the genocide in Srebrenica.

We are one of those rare small groups of people in Serbia who recognise the Srebrenica killings as genocide. Every year we organise a commemoration for Srebrenica on 11 July. On the twentieth anniversary of the genocide, we organised multiple actions, including ‘When Serbia Looks in the Mirror it will see Srebrenica’. Protestors gathered outside the Presidency in Belgrade, holding twenty mirrors up to represent the twenty years since the Srebrenica genocide. We wanted those in power to see their actions in Srebrenica reflected back at them.

As a result of our public expression of solidarity with the victims of the genocide, we have been, and continue to be, subjected to pressures and physical and verbal attacks. During our protest in 2005 at Republic Square, tear gas was thrown at us. At the marking of the genocide in Srebrenica in Valjev in 2014, we were physically attacked and hurt. This is one of the reasons why so few are prepared to publically honour the victims of the Srebrenica genocide with us.

The first time we met with the women of Srebrenica was in Tuzla in October 1995. We reached out to these women to seek forgiveness for the atrocities committed in our name and to begin to weave the threads of coexistence.

We have also participated on several occasions in the demonstrations organised on the 11th of each month in Tuzla. In 2002, the Women in Black collectively attended the commemoration in Potocari, and we have gone every year since.

I am proud that we have been able to form a strong alliance with the women of Srebrenica, based not only on our mutual fight for truth and justice, but also deep trust and friendship.