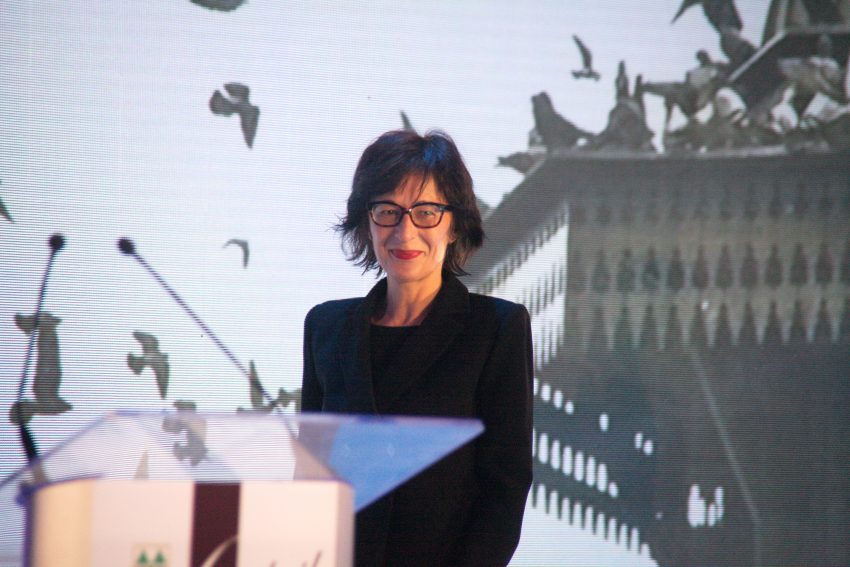 What are your memories from your time as a journalist in Bosnia?

Those of us who covered the war in Bosnia were direct witnesses of the on-going polices of ethnic cleansing aimed at partitioning Bosnia and Herzegovina at the expense of the Bosniak people. It is not something you can erase from your memories. It remains forever in you and influences the rest of your life.

You were the official spokesperson for Carla Del Ponte at the ICTY for six years. What were you hoping that the organisation could achieve at that time and what do you think it has achieved?

Firstly, as a journalist, I was interested in joining the ICTY prosecutor’s office for the purpose of establishing the facts. After the war, journalists were criticized by various groups, even western governments, who were claiming that the media had exaggerated, simplified and lost the necessary objectivity. The ICTY, with its investigations, its power to gather evidence, call witnesses, and conduct exhumations, would not only document the crimes and identify the culprits, but also assess the work of journalists in covering the war. And as we know now, they did well. It is the last war that was properly covered and documented. Now journalists have no access to war zones, at least not the almost complete freedom that we had.

The ICTY had a mandate to establish the facts, to determine who had been most responsible for the crimes that had taken place and to put an end to impunity. It did an incredible job in documenting the crimes, but contrary to its mandate chose to indict middle or low-level suspects first. Then Milosevic died in 2006, 40 hours before the end of the trial. The most important trial, the one for which, in a sense, the ICTY was primarily created, did not lead to a judgement, leaving hundreds of thousands of documents and testimonies unassessed.

Later, several judgements were rendered that were clearly influenced by politics, on some occasions even contradicting the facts established so far by the very same judicial body. In the end, we have a very strange narrative of the conflict that does not fit with what we saw and documented at the time it occurred.

You were indicted by the ICTY for disclosing the exclusions of critical Serbian war documents regarding the Srebrenica genocide. How do you think that the exclusion of this information has impacted on the international courts’ ability to deliver justice for the victims?

The 2007 Bosnia v Serbia International Court of Justice case specifically discusses the fact that certain critical war documents from Serbia were excluded, on the order of ICTY judges. It is therefore established that this impacted on the judge’s ability to assess Serbia’s role in the Srebrenica genocide.

What I did, as a journalist, was to expose that the reasoning behind the ICTY judges’ agreement to exclude those documents was unlawful. As a result of this, the documents have since been made public in other proceedings. It now appears that these documents are not sufficient per se to prove Serbia’s involvement in the Srebrenica genocide.

We should remember that governments do not keep written records of their orders that could lead them to being held accountable for the most serious crimes, especially genocide. It is, therefore, of utmost importance to get access to everything available in order to “join the dots” and prove genocidal intent. This was the ICTY prosecution strategy in the criminal case against Milosevic which, regrettably, didn’t end with a judgement.

Thanks to the ICTY investigations, we know almost everything about the Srebrenica genocide. But we still do not know when the decision to commit genocide was formed and who shared the specific genocidal intent ahead of the implementation. Genocide is always a process – not a last-minute decision. So, a key part of the Srebrenica genocide, and whether Serbia played a role in it besides influencing the Bosnian Serb forces, remains in the dark. This failure to show the ‘big picture’ is the key failure of the ICTY and has brought into question the ICTY’s ability to render justice to the victims and challenge impunity.

The International Community was extremely shocked when you were arrested on the orders of the ICTY last year. Can you tell us what it was like to be incarcerated alongside war criminals?

I am not of the opinion that the international community was shocked when I was arrested. International media, victims’ associations and ordinary citizens were indeed, but not Western governments. I had no problem with being around war criminals – I had already been “with” them when they had the power to kill. In prison, they were powerless, neutralised, held to account for their crimes.

What was unbearable was to be deprived of my freedom, held in prison under segregation measures and day and night surveillance, on the order of the very people who were given the mandate to deliver justice for the victims, simply for having shown that these same judges had betrayed their mandate. It is important to remember that I wasn’t indicted or convicted as a former employee of the ICTY – the judgement clearly stated that I was convicted as a journalist and that what I wrote was true, but confidential. The most important issue here is that my indictment was intended to cover up the fact that certain judges had betrayed the Bosnian victims and the ICTY mandate.

When we criticize the ICTY results, as I do, we must always to keep in mind that the ICTY was not a mistake, it was in fact the best of all international community’s responses (or lack of responses) to the mass killings in Bosnia. The mistake was in letting the ICTY fall into the hands of people who discredit it. And those at the highest level of international judicial bodies are proposed and elected by our States.

What more do you think can be done to deliver justice for the victims of the genocide in Bosnia?

The most urgent need for the victims of genocide in Bosnia, not only in Srebrenica, but in all municipalities where the genocidal project was carried out, is to put an end to the on-going aggressive official policy of denial in Republika Srpska.

We have an untenable contradiction today: millions of euros have been legitimately spent to provide the region with an undisputed record of the crimes, but for over ten years we have been witnessing a denial policy that is getting stronger each year without any serious measures being taken to stop it.

Today, any attempt by the victims to mark an anniversary of a massacre and pay tribute to the dead is considered as a hostile act in Republika Srpska. The policies that underpinned the mass killing project during the war have not been defeated. Justice was aimed at defeating them by qualifying them as criminal. Delivering justice to the victims meant, therefore, creating an environment in which war could not be continued by other means. I think that it is on these issues that more can be done to deliver justice.

As long as Bosnia is in a state of “unfinished war”, we can hardly speak about justice.