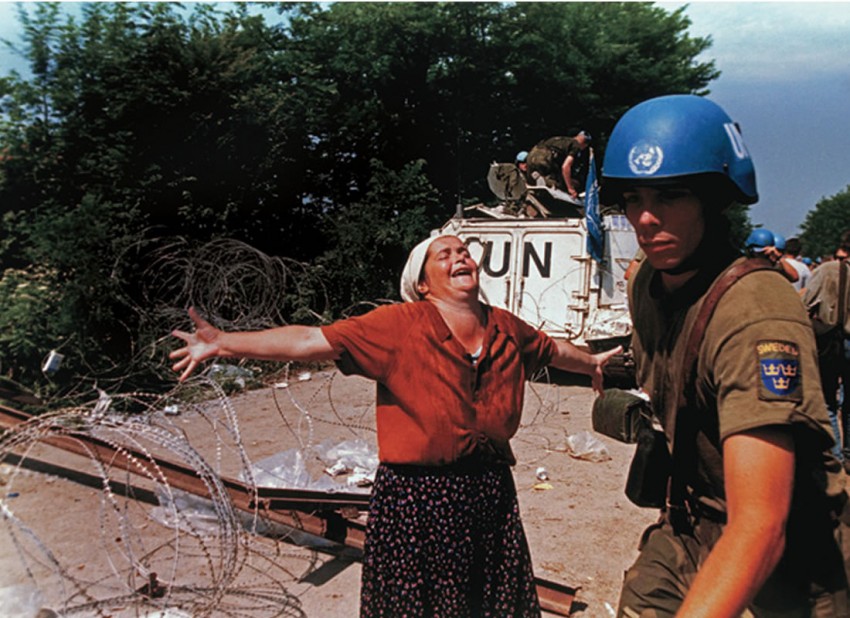 In the spring of 1992, the flowers bloomed in Bosnia and Herzegovina. The scent of lilies was everywhere, but not for long.

It started with the sirens, the sound of soldiers, gunshots, and shells echoed throughout, storming in like a tornado not leaving a single lily, aiming to destroy the beauty of a multiethnic country. It was the beginning of the war in Bosnia that raged for almost four years, taking over 100,000 lives, and displacing approximately 2.2 million people throughout the world.

It was a war that marked the longest siege of a capital city in the modern history of warfare – the Siege of Sarajevo; concentration camps that sent a shudder throughout the world, reminding us of the Holocaust; the destruction of Bosnian heritage and the old bridge in Mostar; the murder of innocents on the Mehmed-Paše Sokolovića on the Drina River; the campaign of ethnic cleansing in every city, town and village; the 11th July 1995 Srebrenica genocide; and the rape camps… Oh, the rape camps! The mere mention of the word ‘rape’ evokes feelings of unimaginable horror, pain, and suffering.

“She did not want us to see that humanity had turned inhumane. She tried to be our saviour and our guardian angel.”

In Bosnia, rape and sexual enslavement was not a byproduct of the war. It was a policy and a systematic instrument of war, aimed to destroy the dignity and honour of women, to instill fear so that they would remain silent and humiliated in their communities. However, they were not silenced.

A number of women spoke about their torture and inhumane enslavement in rape camps in Foča, Prijedor, Kozarac, and other cities, leading to a number of trials at the International Criminal Tribunal of former Yugoslavia (ICTY).

In 2002, after the judges had heard the testimonies of over 20 women about repeated acts of rape and sexual enslavement, three Bosnian Serb army officers Dragoljub Kunarac, Radomir Kovač, and Zoran Vuković were found guilty of rape charges of such a nature that rape was declared to constitute a crime against humanity. The case literally changed the scope of international law, and so rape became a crime against humanity.

They have broken the silence of fear even though the majority of women who were raped, impregnated and who gave birth to children thus conceived have not spoken. But the bravery of Bosnian women should not be limited to the rape trials; their resilience and defiance, along with their decision to break the silence about their rapes must be recognised. Their identity should not be limited to that of a rape victim, but they should be recognised as women who stood against all the odds. This is seldom a focus when it comes to the women of Bosnia.

The stories of Bosnian mothers and sisters have been overshadowed by stories of killings, and at times I feel that while we are dealing with statistics and ICTY trials, we forget that there is a human heart behind each story. I would not have been able to survive if it were not for my mother – a woman who in the midst of a vicious war maintained her sanity and tried to maintain a sense of normality.

When my mother held my hand, she comforted me and eased my fears, my hunger, and ultimately my pain.

She tried to ward off the spectre of death, the possibility that we might not be alive the next day. She comforted others, and most of the time forgot about herself. But the unimaginable and unexplainable thing about any war is the compassion and sincerity they bring between people. The extraordinary steps people take to comfort each other, and the moments that one cannot forget nor find words to describe.

One such moment was on 24th May 1992. It was my seventh birthday, and we were in our neighbour’s basement during the attack on my hometown, Kozarac. I remember the chocolate I got in the midst of the shelling. Our neighbour, Safeta, a woman in her mid-50s, ran upstairs risking her life to make sure that the shells would not be my only memory of my birthday; she wanted me to remember the taste of a chocolate shared with my three older sisters. This moment of overwhelming joy amidst utter confusion describes the bizarreness of war; a war that I, as a seven-year-old girl did not understand, but have spent the last 20 years dealing with the invisible scars and images of a past that cannot be erased.

The images are engraved in my memory, and I try to share them with the world for the benefit of future generations because I do not want another little girl to live through what I have. This is the reason why I try to reckon with the past, even though one of the hardest things to do is to write about my past, especially about my own mother, because I still feel her pain and fear – fear of not being able to comfort her four daughters and fear of losing us.

The invisible scars that we try to hide somehow find their way to the surface reminding us that we are alive. They enable us to remember and commemorate the war year after year; but we tend to forget that each year we are reminded of the very moments we thought were our last ones. The moments when our mother’s voice was the only comfort we had. These moments and the numbers representing hours, days and years that keep moving forward with speed, leaving behind shattered memories of pain – a ruined childhood, of family, relationship, and home – is something that cannot be rebuilt from the ashes.

Nevertheless, these moments are also cherished because they are also a reminder of our strength and love for one another. They enable us to remember the heroic acts our mothers, sisters, aunts, and women in general undertook to make sure that life prevails.

The women of Bosnia were defiant, courageous, and brave during the war because they kept their children alive. They were holding on to the future by holding their children’s hands. Like the majority of women in Bosnia, my mother did not get a chance to shelter her children or herself from the war. She was exposed to the full horrors and her only wish was to find shelter and, ultimately, safety for her four daughters – safety in a corner of the basement, away from the windows and the sight of the darkness that overtook our city and our country.

She wanted to cover our eyes and ears to keep our innocence alive; she did not want us to see the violence, feel the fear, hear the gunshots or the harrowing screams of a human voice that followed. She did not want us to see that humanity had turned inhumane. She tried to be our saviour and our guardian angel. And she succeeded. She kept us safe, as much as humanly possible, by holding our hands and never letting go.

This is not a story about my mother only. Her resilience and strength to protect her children is the story of the women of Bosnia.

They had to be the nurturer of life, if life was going to prevail. The strength of Bosnian women during the war will never be fully understood by an outside observer because they have only shown a glimpse of it to their children and to the ones they tried to protect. So we – the children of these courageous women – have to open our hearts and souls, and we need to tell the stories, one by one, because our mothers will never share their past.

This is what I am striving to do, even though this is a story that pains me, and I wish I never had to write it. But it is the least I can do for my mother, my sisters and the women of Bosnia and Herzegovina.