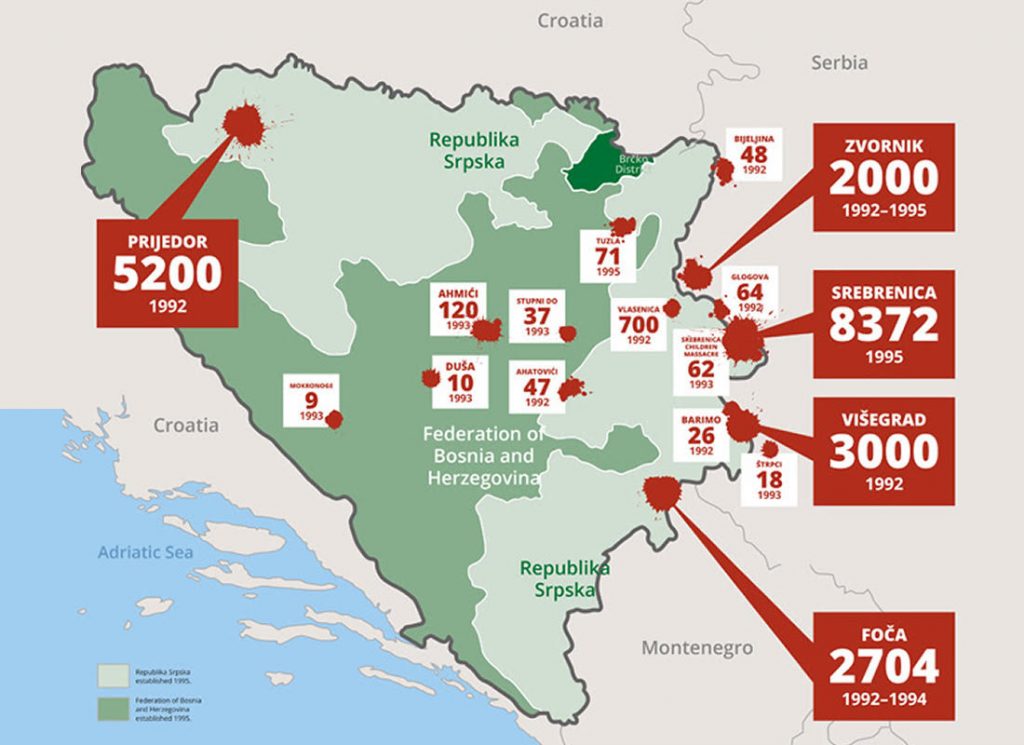 Almost a full three years before Srebrenica, Lady Thatcher spoke of “Serbian ‘ethnic cleansing’ policy” and compared “expulsion of the non Serb population” with the “barbarities of Hitler’s and Stalin’s policies toward other nations”. The UN Commission of Experts in an interim report in January 1993 to the Security Council, defined ethnic cleansing as “rendering an area ethnically homogenous by using force or intimidation to remove persons of given groups from the area.”

Their February 1993 report said ethnic cleansing described “a policy conducted in furtherance of political doctrines relating to ‘Greater Serbia’. The policy is put into practice by Serbs in Bosnia and Herzegovina and Croatia and their supporters in the Federal Republic of Yugoslavia.”

The geography behind the ethnic cleansing, as the map illustrates, was noted by the report, “The manner in which the policy of ‘ethnic cleansing’ is carried out by Serbs in Bosnia is consistent through- out a certain geographic area represented by an arc ranging from northern Bosnia and covering areas in eastern and western Bosnia adjoining the Serb Krajina area in Croatia. The practice of ‘ethnic cleansing’ is carried out in strategic areas linking Serbia proper with Serb-inhabited areas in Bosnia and Croatia. This strategic factor is significantly relevant to understanding why the policy has been carried out in certain areas and not in others.”
Despite such early knowledge on the part of the UN as to Bosnian Serb aspirations for the land that was to become Republika Srpska, thousands upon thousands of Bosnian Muslims lost their lives and their homes because of ethnic cleansing, with Srebrenica representing the largest death toll.