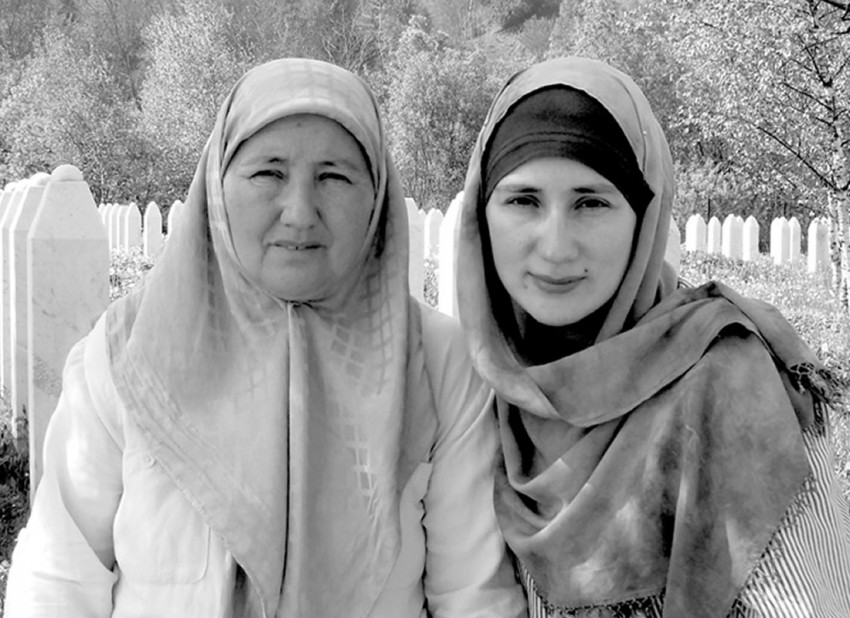 I was the youngest child in my family. I had an older brother who was around 16 when the war broke out. You could say we were more aware of the situation because my father was a politician. He was a principled man, who wanted to save his people. And for that reason, he insisted that we stay in Srebrenica when the war began.

At the time, Srebrenica was a Muslim-majority town, with 75% of the population being Bosniak. My father decided that we would resist the oppression. He spoke to many people in the town about this, and they all agreed. This was their home, and they would not be chased off by anyone. I remember being mesmerised as a child by the way my father spoke; he had such courage and conviction in what he said.

“Children were hardly children in Srebrenica. We had no freedom to run and play in the streets for fear of being struck and killed by a shell.”

Prior to the war, we led a very quiet, peaceful life. Srebrenica is a small town, and everyone looked out for one another. We certainly were not blind to the ethnic tensions. But we were an integrated society: Bosnian Serbs, Croats, and Bosniaks went to school together, worked together in offices, and lived side by side in peace.

War changed all that, and Srebrenica in particular became inhabitable. We had to survive without electricity, running water, food, and medicine. As the Serbian hold on the town became stronger, the conditions deteriorated. Children were hardly children in Srebrenica. We had no freedom to run and play in the streets for fear of being struck and killed by a shell.

Playing games changed into the game of survival; no one felt safe any longer. And for me, seeing the strain and helplessness in my parents’ faces was enough to communicate the extremity of the situation. I wasn’t a child for very long after that. In fact, I imagine that for any surviving child of Srebrenica, childhood feels like a hazy, long-forgotten dream.

“I pray that my three children grow up to be kind, tolerant people. I want to teach them to always to be aware of everything around them, and to be smart about the decisions they make.”

By the time of the genocide, I was 15. As the Serbian military descended upon Srebrenica, we ran for cover to Potočari. The UN base was completely full. So we hid in a nearby factory. My father and brother fled to join The Column, but they couldn’t catch up to the men who had already left. I was told that they were captured by the Serbian military in the hills surrounding Srebrenica.

Meanwhile, my mother and I were in the empty factory with thousands of other women and children for three days. We had no food, and no water. By the fourth day, the Serbian military escorted us onto busses and trucks headed towards the free territory.

The journey, which takes a maximum of one hour, took four grueling hours to complete because of the sheer magnitude of women and children that needed to be transported.

Suffering from exhaustion and a high fever, I was completely unaware of what was happening around me. When we arrived in the free territory, I distinctly recall hearing screams coming from the river. But I never turned back to see what was happening. I just wanted to keep walking forward; away from the chaos, and away from the stench of death that hung heavily in the air. I can still hear those screams today.

A month later, we heard about my father. He had been kept in a hangar in Kravica with several other men, and later executed. His remains were finally identified in 2002 in a mass grave in Srebrenica, and we buried him in 2004. Four years ago, we heard about my brother. They found just 25% of his mortal remains in secondary mass graves. He was killed in Zvornik, just 19 days before his 20th birthday. On 11th July this year, we will bury the pieces of him they found.

I had definitely grown up by the time the conflict was over. My family was literally cut in half; my father and brother snatched from us in the most horrific way. And yet I understood that life had to go on. My mother enrolled me at a school in Zagreb, Croatia, and she went to Germany as a refugee. She insisted that I gain a full education to learn about the history of the world, and recognise that I had to be part of the educated majority who could actively do something to stop such an atrocity from ever happening again. Whilst I understand why she sent me to Zagreb, parting from her after what we went through together, especially at that age, was very difficult for me.

After I finished secondary school, I returned to Bosnia with my mother. We rented a flat in Sarajevo until I graduated, and then my mother moved back to Srebrenica. I always knew that she would go back. She believes in justice, and she wanted to fight for what was and is right- fully hers — her home. So I was adamant to support her. But I chose to make a life for myself in Sarajevo.

I married, had children, and attempted to continue with my life. But the war, and in particular, the genocide, continue to haunt me. That sort of experience scars you in a way that cannot be communicated in words.

I go back to Srebrenica at every opportunity I get. Not only for my mother, but also for myself — as a method of finding some stillness now in memories that are seared with the chaos of bloodshed and horror.

I pray that my three children grow up to be kind, tolerant people. I want to teach them to always to be aware of everything around them, and to be smart about the decisions they make. I want to teach them about my past, so that they can be aware of their history. But for now, I just want them to enjoy a happy, carefree childhood, where they can feel safe and protected in their own home.