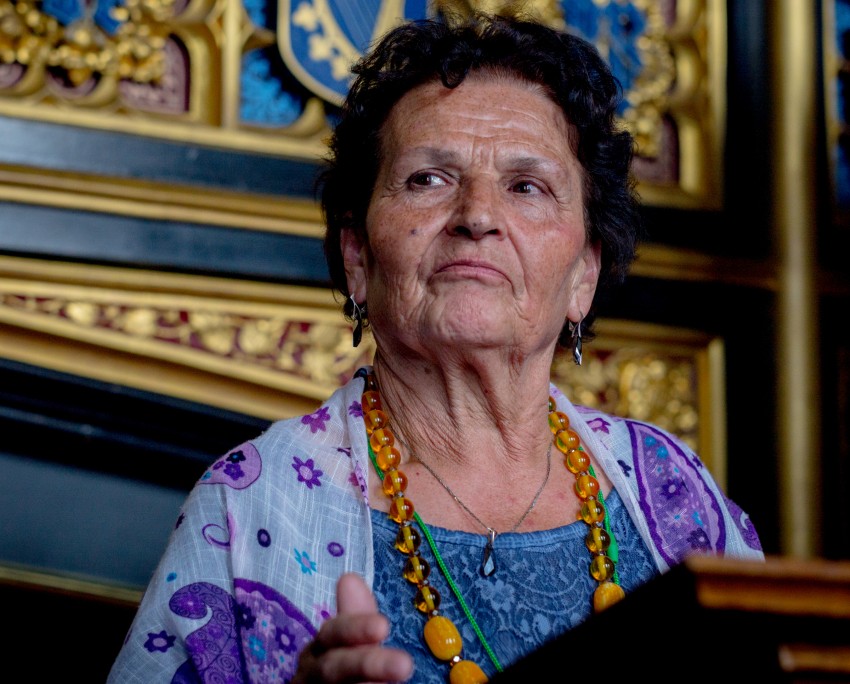 Kada Hotić lost her son, husband and two brothers in the genocide. Though horrific, it is the least extraordinary part of her story. What she witnessed during the night and day she spent at the UN base and the 90 minute bus journey as she was deported from Srebrenica would send chills down anyone’s spine.

Kada Hotić is a tiny, elegant woman. No stranger to fascism and ethnic cleansing, she was born in 1945. She never met her father who fought against the Nazis in the Second World War.

A green shawl is draped over her slim shoulders, and her neck, hands and ears are adorned with simple, but beautiful costume jewelry. It’s unsurprising that she worked as a seamstress in a factory in Srebrenica before the war.

“But I would never wear the dresses we sold. I loved pretty clothes and would always make my own designs.”

“Life was really good. We had an actor’s club, a theatre, a music and dance school. My daughter, Lejla, would learn the Tango and other Latin American dances, and I would dance traditionally. There was live music in a garden café everyday, we’d go fishing during the summer, and swimming in the clear waters of the Drina.”

But things changed when the peoples of the former Yugoslavia called for independence, and suddenly identity became divisive. She remembers an incident before the war that reveals something of the relationship she had with her neighbours. It mirrors the story of many others who found themselves witness to odd scenes with their Serb friends just before the occupation and siege.

She recalls staying at the house of Drago, a Serb neighbour, one night when the snow lay thick and heavy on the ground. He lived in a remote part of the hills, with a dirt track for a road leading to his house. His wife was baking enormous amounts of bread, despite their living alone. He was taking up his wooden fence and burning it for fire.  A lone car trundled past the house on the dirt track heavy with artillery.

“I asked them about it all. Everything was very awkward. We decided to not stay with him and they offered us food and oil, and we went back to town. My niece was with us, and one of Drago’s relatives caressed her hair and started crying, saying: ‘Poor you, poor you. You don’t know what’s going to happen to you.”

A young man came into Drago’s house, armed with a gun. He was a school friend of her son Samer, and asked him for a cigarette. I asked why he was carrying a gun. He said: ‘I have no idea. I haven’t slept for 18 days and I have no idea what’s going on.’” Kada told him she felt sorry for him, and that he should take care.

When the war came in April 1992, snow was still falling heavily. “It’s the first time I had heard the rolling thunder of weapons and shelling. The fear I felt at that moment was immense. My heard was stuck in my throat because my family’s life was in danger. 56 of us ran into the woods with no shoes on our feet. It rained for 11 days and nights, and we slept on wet leaves.”

The Serbs occupied part of Srebrenica for a few weeks, and during that time Kada says they set fire to many Muslim homes. With poetry in her voice she says she could hear the walls cracking, flames licking the walls while fire engulfed their homes. “It felt like the end of the world. Like Judgement Day.”

A rag tag group of volunteer men, including her son Samer and husband Sead, managed against all odds to beat back the heavily armed Serb forces. But the town was still surrounded and more and more refugees came in every day. Every house had been ransacked and vandalised. By June, they had run out of food.

There is only one road into and out of Srebrenica – it sits like a long crooked finger on the map of Bosnia and Herzegovina. Both were blocked. Of the tens of thousands who streamed into the municipality, many came with nothing but the clothes on their backs. Kada remembers banding together with other women to raid nearby Serb villages for food and supplies. Her sewing skills came in useful when air drops later happened, and she used the fabric from the parachutes to make clothes for those who were desperate in Bosnia’s bitter cold winters and melting hot summers.

Like many Bosnians, Kada smokes. Her cigarettes are long and elegant. They rest between ringed fingers, and when she recalls the 11th of July, she makes short work of three in a row. Her voice drops, and her pace slows.

“My daughter had gone to school in Tuzla a few years ago, so it was my son, husband, one of my brothers and his wife and children who walked to the UN based seeking safety. We joined a river of people. There were heads upon heads and it looked like never ending. Men were heading towards the woods, and my son Samer and other brother, Mustafa, left to join them as well. Samer had moved away and I realized I hadn’t said goodbye him, so I called him back and said: ‘Good luck, son.’ That was the last I ever saw of him.”

“As we walked on, three shells exploded in the mass of people and the road was covered with dismembered body parts. By the time we got to the UN base, it was teeming with refugees and there was no room for me or my family. We spent the day and night under the sky.”

The following morning, Ratko Mladić arrived with cameras, and a soldier that Kada knew – a neighbour called Jecko. His eyes were bloodshot and his cheeks bore a scar. He approached Kada and asked where her son and husband were. At this, Kada draws her finger against her neck and says he told her, while laughing harshly: “We will have fresh meat.” The horror in Kada’s face palpable. “Another former neighbour came and took her brother away. He ended up coming back briefly to collect a leather jacket she recalls he loved. “I asked him, ‘where are you going?’ He said: ‘don’t ask.’ That was the last I saw of him.

All that night, she recalls pressing bodies against one another, and screams filling the air.

“Horrible, indescribable sounds. All night long they took women and young girls. Daughters were taken away and not all were returned. They raped one nine-year-old girl in plain sight. I was less than 10 metres away and heard the screams. They were wearing UN helmets, but they were not UN soldiers.”

The following morning, the horrors continued as women waited to be placed on buses. In the mass of people, a three month old baby was crying and a soldier shouted to the mother to “shut that baby up.” The mother said she was unable to, and Kada witnessed the soldier take the child by the head, cut its neck and throw the body in the opposite direction. A woman was in labour a metre from her.

“The baby literally fell out of her because there was no one to help. One of the soldiers said: ‘I’ll help” and stepped on it. It hadn’t even been given a name.”

The stories are inconceivable. The lack of humanity displayed incomprehensible. And yet it is impossible to doubt her. Her recollections are supported by many others, and more than this – the detail of the incidents are vivid. A story more probable would in fact be less credible.

With her, however, still remained her husband. Having never been apart in the thirty years of marriage, they waited to board the buses ready to deport them. But a soldier came over, and put a gun to her husband’s head. He was taken to a cornfield. In complete shock, Kada could not utter a word. She silently stepped onto the bus. “I didn’t feel anything. I didn’t feel fear, hope, or desire. At that moment, I became an empty shell without any feelings at all.” She recalls seeing an elderly man being carried by two women. A soldier asked him to walk, but he was unable. The man was shot point blank.

On the bus, Kada recalls the driver put the music on, and the incongruous nature of its jaunty tune with what she had just witnessed. He turned around to face the passengers and told them chillingly:

“Women, take care of your children. You have now no-one and no one wants you.”

On the 90 minute journey to Bosnian Free Territory, Kada saw streams of men walking with their hands behind their heads. “I didn’t look too hard, I was afraid I would see my son or brother.” She passed flat land to her left, and saw men standing, naked from the waist up. Their hands also behind their head. She passed a UN transporter and the thought crossed her mind: “all of these men are going to be killed.” When she spoke to the women on the buses that came after, they confirmed they did not see men standing, but prone on the ground.

“I saw one man who was skewered like a kebab with a fire under him. There were four or five Chetniks around him, wearing very specific black hats. I don’t know if he was alive or already dead, but they were drinking beer and having fun.”

Kada says she did not dream this horrific act – but that no one else saw it. There is of course, no way of verifying her story for sure. It’s an extraordinary claim – but during an extraordinary moment in human depravity. Kada recalls the bus taking much longer than it should have. “He wanted us to see what was happening.”

There were some moments of relief for her. When they got off the bus to walk the final kilometres to safety, they passed a river. She bent down to take a drink of cool water. She saw two girls, around 15 years old, washing too. “They took their clothes off, and I realised they were actually boys! I was so happy to see they had been so resourceful.”

The only relief for her when she arrived at the tent city Tuzla had become was seeing her daughter. Her husband she thought would be deported. She spent two months walking around Tuzla trying to find him, her son and her brothers. But there was no news of any of them.

It was the lack of knowledge about their menfolk that led Kada and thousands of other women to come together and form the Mothers of Srebrenica association. “It was the struggle for knowledge of what had happened, and for the existence of those who survived.”

Kada buried her husband in 2001 – he among the first to be buried in the funeral service held for 600 found. He had been found in a mass grave in Zvornik.

She buried three leg bones from her son in 2013 – that was all that could be identified. And of her two brothers in 2014 – one of them, Mustafa was interred without a head.

“I have told this story thousands of times. I believe God has chosen us to perform this mission, to warn against it happening again. And I pray to live as long as I’m useful and have value.”