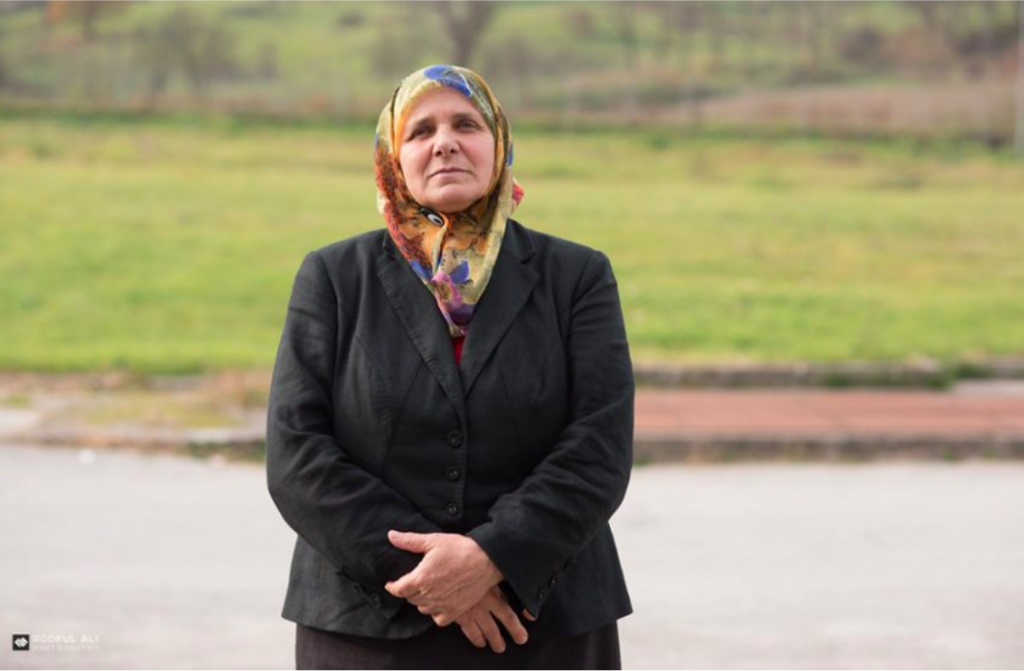 Hatidža Mehmedović was born in the area surrounding Srebrenica in 1952. Before the genocide, she lived her entire life in Srebrenica, where she had married her childhood friend, Abdullah, and had two sons, Azmir and Almir. Hatidža and Abdullah built their home in Srebrenica and lived a simple life as a family before the war broke out and Srebrenica was declared a UN safe area.

One day on the 11th of July 1995 changed all that. The town of Srebrenica was overtaken by Bosnian Serb forces led by Ratko Mladić. Hatidža was separated from her husband and sons when they joined the Column, the name given to the long convoy through the woods and mountains surrounding Srebrenica towards the nearest safe area of Tuzla.

Hatidža describes the moment of their separation,

“…My youngest’s hands were wrapped around me whilst he said “Mother, please go, I beg of you!” whilst he said this he clutched me tighter to him with his hands and that is something that I cannot forget.”

Hatidža was encouraged to go to the UN base at Potočari. When she first saw the large gathering of people who had sought refuge with the Dutchbat at the UN base, she regretted not bringing her family with her. That all changed, however, when Mladić and the Bosnian Serb forces arrived at Potočari and began dividing the men and boys from the women and elderly. Hatidža did not yet know how deadly the journey from Srebrenica to Tuzla would be for the men who had formed the Column. All she knew was that survival at Potočari for the men and boys there was unlikely.

On her third attempt to board a bus to escape Srebrenica, Hatidža succeeded. She arrived at Kladanj and awaited news of her family. She believed that the men of the Column would only be two or three more days, that they would arrive tired and hungry, but alive. She was not aware that Bosnian Serb forces had already routed out most of the men who undertook the dangerous journey, disguising themselves as UN soldiers with uniforms taken from Potočari or capturing men from the Column and ordering them to shout to their parents, sons and grandparents to lure them out of the forest.

Hatidža had to wait longer than two or three more days to discover what happened to her family. On 13th November 1996, almost a year after the war’s end, Hatidža received a phone call informing her that a body believed to be one of her children had been found in a mass grave. The body was that of her youngest son, Almir, whose body was found mostly complete.

However, Abdullah and Azmir were not found alongside Almir’s remains. It wouldn’t be until 1998 that Hatidža would know what happened to the rest of her family. Of Abdullah, only a few bones were found. Of Azmir, only two leg bones.

Due to Bosnian Serb forces moving bodies from the primary mass graves into secondary and tertiary mass graves using mechanical diggers, Hatidža’s family was scattered across kilometres, often with only partial remains in different locations.

Hatidža waited almost 12 years in the hope that more of her husband and eldest son’s remains would be found. The wait was in vain. In 2010, Hatidža decided to lay Abdullah, Almir and Azmir to rest at the Potočari Memorial Complex.

At the hands of the Bosnian Serb army, Hatidža lost more than just her husband and sons.

Even after facing such suffering, Hatidža returned to Srebrenica in 2003, one of the first to do so. She returned to the home she had built with Abdullah, having to fight to remove the Bosnian Serb family who had claimed it as ‘spoils of war’. But for Hatidža, the place was more than just bricks and mortar:

“I could never live in any other place other than Srebrenica. I say that Srebrenica is the symbol of suffering, the memorial place is our holy place, our pilgrimage, our sorrow… I returned to live from the memories of my house. I have three trees which my youngest son planted. He was young then; the trees are big now. I live where my children once walked, I always imagine them coming, whenever I am alone I always imagine.”

Hatidža founded the Mothers of Srebrenica Association, which supports the women who lost their families during the Srebrenica genocide. She led the women in numerous projects and campaigns, including the establishment of the Srebrenica-Potočari Memorial Complex and Cemetery and the civil lawsuits against the UN and the Dutch government for failing to protect those in Srebrenica in 1995.

Hatidža continued to campaign tirelessly throughout her life for justice for Abdullah, Almir and Azmir. Her powerful story challenges those who would deny that genocide occurred in Srebrenica. Even though she witnessed the worst of humanity, Hatidža never gave in to feelings of revenge and discouraged others from doing so.

“If they were to give me a whole world of Serbians to kill and told me to seek revenge for my children, I couldn’t imagine it – let alone carry the weight of the guilt because sadness and grief have remained my only friends. I have nothing more.”

After a long battle with breast cancer, Hatidža passed away on the 22nd of July 2018 in a Sarajevo hospital aged 65. Throughout her illness, she continued to campaign for the justice of the victims and survivors.

“Who sincerely comes to Srebrenica on the 11th, he is truly a friend of ours and of these white gravestones.”