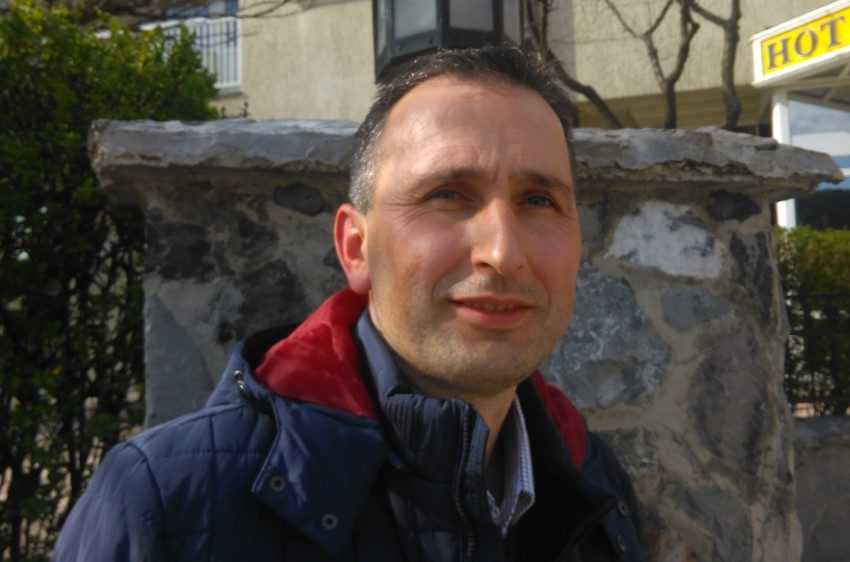 Hajrudin Mesić, the youngest of five brothers, is the only one of his siblings to survive the Srebrenica genocide. He was 21 when it happened.

Before the war started, he had more reason than most to be hopeful about his future. “I always wanted to continue studying and be a teacher. We were the first generation not conscripted into the Yugoslav army. But still my generation suspected that something might happen. The world was an uncertain place and so we didn’t make plans. Serbs were fighting a war in Croatia, and everything pointed to a war between us too. The Bosnian Serbs were segregating themselves from us.”

When the Serbs swept through Eastern Bosnia, his town of Macesi in Vlasenica faced heavy bombing. There were ten villages with around 400 people in them. On the worst day of bombardment, 76 people – almost a quarter of the population – were killed in one day.

That number included the first of his brothers, who was killed by sniper. It took two months for the Serb forces to take over all of the villages, but Hajrudin’s family were amongst the last to leave. They were expecting international help, but he says that when they watched a UN transport vehicle reduced to rubble by Chetnik forces.

“We realized the UN could not protect themselves, let alone us.”

Hajrudin, along with his now three brothers, had to each carry as much food as they could to Srebrenica as it was so scarce at this time. For more than 50km he carried 30kg of corn, protecting it each night, using it as a pillow. When they arrived in Srebrenica, for a few days he and his family slept at his uncle’s house – but as more and more people arrived there was no longer room. On clear nights the teenage Hajrudin slept under the stars, while on rainy sodden nights he found what shelter he could under half bombed out buildings.

In the early days the bombing of Srebrenica was almost constant, as the Serbs lay siege to it. On the 12th of April 1993, his brother went to a help a woman carry her packages. A shell came whistling through the air, and killed him, along with 75 others.

“Personally this was the hardest time for me. I was about 20, and the way we lived in Srebrenica could have lasted 5, 10 years. There was no way of knowing how long it would go on for. I was dejected and felt hopeless. Everything was on pause. It was a half-life and I felt I was in a concentration camp. We could move 10km up and down – but that was it. For my remaining brothers – their wives and children were in Tuzla, and we had no way of knowing if we’d see them again. When now I see the images of life in Syria, I understand why they’re running to other countries to escape. It’s a feeling of total desperation.”

Hajrudin becomes more animated when remembering the events just before and on the 11th of July. His anger at the isolation felt by those in Srebrenica, abandoned by the outside world.

“A few days before the Chetniks had entered Srebrenica through underground mining tunnels and also through friends they had in the Dutch battalion. Those who were living in the periphery of the municipality came into the centre, and we heard on the radio that the international community would stop this. Our expectations were high, but they fell through. The Dutch soldiers withdrew from their positions and nowhere was safe.”

“Srebrenicans had handed over their weapons in return for international security, but we were betrayed. We had no weapons – only hope. My elderly parents went to the UN base, and my two brothers and I went to the woods.”

“The whole thing was a huge mess. You just moved with the column; it was chaotic. You had no time to see where you were going. People were being shot at all the time – there were stampedes and people dying all over the place. We had no idea where we were. It was like judgement day.”

About two kilometres into the woods, Hajrudin ran into the first of many ambushes. While he and one of his brothers were helping to carry the wounded after the attack, they became separated. He never saw his brother again.

Hajrudin had been at the back of the column, but was steadily moving forward, feeling that it would be safer there. Within a couple of hours he had reached the front, where he saw a friend who asked him: “What took you so long? Your brother is waiting.” His says his brother had been slowing the column down to try and give him a chance to catch up. He was only a few metres away when the shelling started and his fourth brother was killed.

“I was in a specific state of mind where I was living from one minute to the next. I didn’t think about anything beyond that. It was harder for men who had wives and children. I’m an optimist by nature and had faith that I would get through it.”

On one night they were calling on the Muslims to surrender but also either pretending to be Bosnian or wearing UN uniforms. Hajrudin was near Kravica at the time – and heard gunshots every fifteen minutes or so after swathes of men surrendered. He and his group were surrounded in the forest, and he was captured.

“The key moment for me was hearing an older man asking to be saved, but seeing a Chetnik take a knife, and say: ‘We didn’t come here to negotiate with you – we came here to end things with you once and for all.”

This is when I realised that they would kill everyone, and at about 2 or 3am, I decided to run. I felt it was better to die trying to live, than await execution. Luckily it was dark, and they didn’t see me.”

Hajrudin evaded multiple ambushes – including attempts by Serb soldiers to infiltrate the column and lead them to the Serbs, and false calls to prayer.

“It got to the point where you just didn’t trust anyone and the paranoia was intense.” He realized the best thing was to stay in a small group of known men. “I decided I would never surrender, and that that the best way to survive was the go through the Serb villages, which would not be so well patrolled.

We hid under bushes by day, and went through Serb farmer homes by night. We were exhausted and the pain from my hunger was horrible. If I sat down I would fall asleep and dream of food.” It soon reached a point where I realised I would die of hunger or through a bullet.”

Running through the woods for seventeen days, his worst moments came when he was chased by dogs. “The Serbs used the roads, and the dogs picked up the scent. I heard the dogs behind us, and we ran from one Serb trench to another, when suddenly the shooting stopped. I thought we had reached the free territory and started walking. But I had arrived at a burnt down village, and started walking on roof tiles that had fallen on the floor.

They made a cracking noise and the shooting started again. I crawled – and I remember the pain. I was carrying with me several wild pears that I had found and was refusing to let go of. I fell into a trench and a phone line caught my throat. I was being shot at from both directions as I ran up and down the trench.”

“I managed to crawl out of the trench, but three of my friends were trapped inside. One was a 17-year-old boy who was wounded and could not get out. The second asked for a gun to kill himself, and the third was wounded and clearly dying. The Serb soldiers starting approaching, but the dying friend created a distraction, giving me the chance to run away.”

Hajrudin passed through two lines of Serb defence, and had yet to pass through the last one to reach safety. By this time, he was poorly – after having walked in socks through rivers and wet ground. He was coughing and had a cold, but saw a group of Serbs talking and laughing ahead of him.

“This was the most important day of my life I didn’t want to make a noise in case they heard me but I could see freedom ahead of me. I stayed in my position, but then a man motioned just 40/50 metres in front of me. He was a Bosnian, and gave me food. I ate so much so quickly after seventeen days of near starvation.”

A van took him and others to Tuzla. Hajrudin was reunited with both his parents who, after days of wretched waiting, had given him up for dead.

“My parents treated my arrival like a gift from the heavens.  I will never forget the moment I saw my mum again. And my father was seriously ill at the time, but seeing he had at least one son gave him a reason to live.”

Today Hajrudin has fulfilled his dream of becoming a teacher and now lives in Sarajevo with his wife and children. But he still has nightmares about the day when his village was occupied. He still feels pain that he lost two of his brothers even before the 11th of July. One of them – about to be a father – was buried in 2003 after being found in a minefield.  His final brother is still missing.

He needs more people to talk about what happened and know what he went through, but he’s not trapped in 1995. “My brothers and I always had a cheerful spirit. It helps to keep me going forward. Three things keep me alive – my religion, books, and a sense of optimism.”