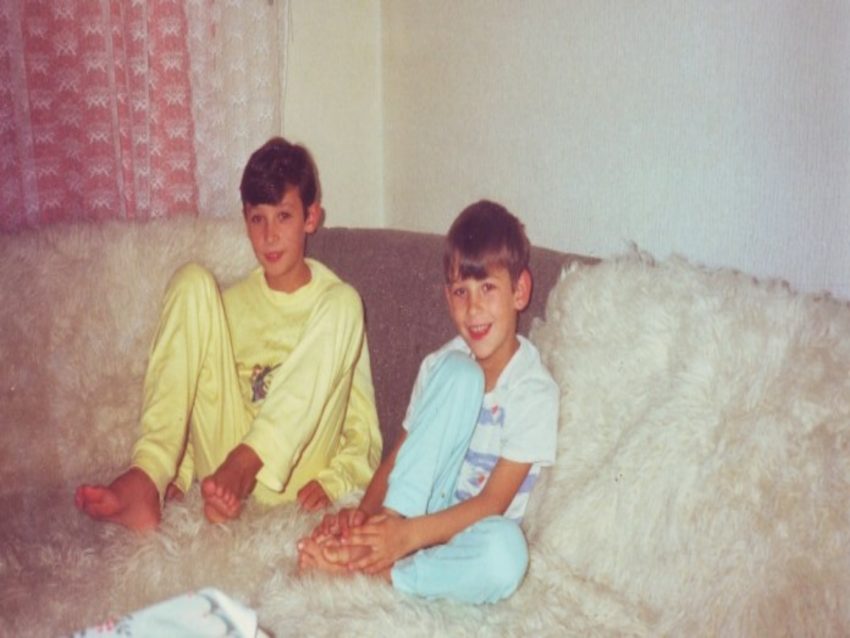 “My brother, Amel Hodžić (left) and me (right) before the war, circa 1991. Maybe the last photo with two of us together.”

My name is Džemil and I was born in Sarajevo, Bosnia and Herzegovina in 1983.

I remember how life was, a simple, worriless and carefree adventure, it was as if nothing really mattered. My brother and I would walk to school and come back home, eat, go out, play and do the things every child does. Play till you collapse, sometimes skipping meals because of a child’s hyper-euphoric adrenalin rush. We didn’t want to miss anything. Being outside was our food, days were too short, endless happiness.

But in 1992 my childhood dramatically changed – the war started. My life and that of my family was suddenly interrupted, without any warning. One moment it was peace, the next, it was war. Life would never be the same again. Not that I knew that back then, maybe it was better I had lived in a child’s parallel universe. I wasn’t clueless, just a happy optimistic kid.

I was almost nine years old when the war started and about to finish year three of primary school. I remember celebrating my ninth birthday in a made-up bomb shelter with my family and my friends, all of us hiding from the shelling.

Even though there was a war on, for us kids, it was fun. We played, pretending to be soldiers, hiding in shelters, ducking down like we were on the frontline. It was entertaining because we didn’t have to go to school and we could play outdoors, unaware of the very real dangers all around us. We would often wake up to the sound of gunfire and explosions. What for others seemed chaotic and bizarre, for us was normal. It was part of everyday life back then. I remember seeing the bright red search flares light up the sky before the firing would start. The flares would then fall to the ground by a small parachute. We would chase after the flares and play with the parachutes, free toys we thought, but we all knew what they used it for, its purpose was to expose and see who to kill next. When the war intensified, many families had already left Bosnia, neighbours and friends moved away – mine remained.

My father had joined the Bosnian army to defend our country from the Serbian aggressors. He was a proud man and considered it dishonourable to leave his motherland. My mother worked full time as a nurse in the local hospital throughout the war. Even though she saw people die every day, mortuary she would say – she never brought it home to us. I never felt the pain, depression or any kind of misery that she had witnessed in the hospital. I worked out that with my father’s army deployments and my mother’s night shifts, during three years of war they were away for one full year. My brother and I were home alone, most of the time. Upon hearing the warning sirens, we wouldn’t go to school, it would be too dangerous. But for us, the sound of the sirens meant playtime and we would rebel and not go to the shelter. Bizarrely, in the middle of a war zone, we would go out and play all day long. No homework, no parents to nag us, it was every child’s dream. That sounds crazy from today’s perspective, but as a child in 1995, even though there was a war only a stone’s throw from my home I felt liberated, happy and free.

Almost at the end of the war, in May 1995, during a truce between both sides, if something like that was possible in the minds of the beasts who tortured us for 3 years, my life changed forever. We were playing outdoors; my older brother was playing tennis and I was playing marbles with my gang. Suddenly a sniper started shooting at us. My brother was shot in his chest, he started walking towards home, holding his wound. He was the only one shot. Tallest amongst us, the oldest. Kids screaming, crying, mother’s calling out names, total chaos. While he was trying to get home, still standing, his wound bleeding, I rushed to get help and tell my mother, who was making us lunch after her night shift in the hospital. As she was trying to help him I grabbed a blanket to wrap him, I phoned the ambulance and went out to witness what would be the last moments of my brother.

He died on my mother’s lap while she tried her best to bring him back to life.

Those moments, that day, I will never forget. I remember our last meal, the last chocolate we shared and the clothes he was wearing, his watch stained with his blood. I took the watch for myself, I wouldn’t wash it for days after that, I still don’t know why. How come I remember breakfast from that day, how is that possible? So many details are in my head. He was killed from an infamous ‘Špicasta Stijena’. I was 12 and he was 16 the day he was killed. Since then I see life before and after his death while others see it before and after the war. 3rd of May 1995 is the date forever ingrained in my memory. It was the day my childhood ended. Truce they said, no such thing existed in the Serbian war manual.

Unfortunately, I do not have any photos growing up in Sarajevo during the war, as we didn’t have the means nor any of my family and that’s something that I think of all the time. It bothers me that I don’t have any school, birthday or family photos from that period. A single photo from that time would make my day. Looking at the kids growing up today with all the gadgets and possibilities, it feels as if I grew up in a large prison, I have memories and I can remember most things, they are so vivid, bad and good ones. We’ve all heard the line before, “If you don’t document it, it didn’t happen.”

The only photo of myself I have is from my brother’s funeral which I don’t consider wartime. It doesn’t count. For me, the bloody war was finished the day he was killed. It must be something psychological, some kind of a blockade or denial.

I would love to find photos of my brother, maybe his classmates or some friends have them and they are not even aware of it. I wonder how many unpublished photos there are. I remember, when he was killed, we needed his photo for newspapers and funeral services. We only had photos from his early age and then my late father remembered that my brother received a scholarship and they had taken a photo of him. That’s the last photo we have of him, one of the most precious possessions we own.

There are other kids and families who have similar and maybe worse tragedies that happened to them. Perhaps someone else is looking for a photo or a person from those unfortunate times. There are many photographers who visited Bosnia during the war, maybe they have some unshared archive. Something that the world needs to see. That’s one of the reasons why we made the website sniperalley.photo.

The aim of the website is to find, locate and archive photos taken in Sarajevo, Bosnia and Herzegovina during the war from the period 1992 – 1996. This website will document the war from people like myself and my family who went through it. We would also like to credit and acknowledge the brave and courageous photographers who lived it with us and bore witness to our suffering. Some of whom tragically lost their lives in the process. The website will honour those brave war photographers whose work allowed the world to see what was happening to us.

Occasionally, at least once a year I look through photos from my brother’s funeral. My family has a photo album dedicated to my brother only, from him being a baby till his murder. I go through the pictures, think of those times, imagine events, laugh and contemplate.

Writing this wasn’t easy, it took me more than 20 years. Lots of stops and starts. I hope this will help me and help all other kids who lived through the war. As much as it is my story it is more about all of us, children. It is about war photographers. It is about my brother.

This year he would have been 41 years old.

Just in case someone who knew him is reading this.

Maybe somebody has his photo, a memory, a story to share with me.

Thank you to Džemil Hodžić from Sniper Alley for sharing his story with us, please visit his website to find out more about his story and work – sniperalley.photo