Young people urged to stand up to hatred 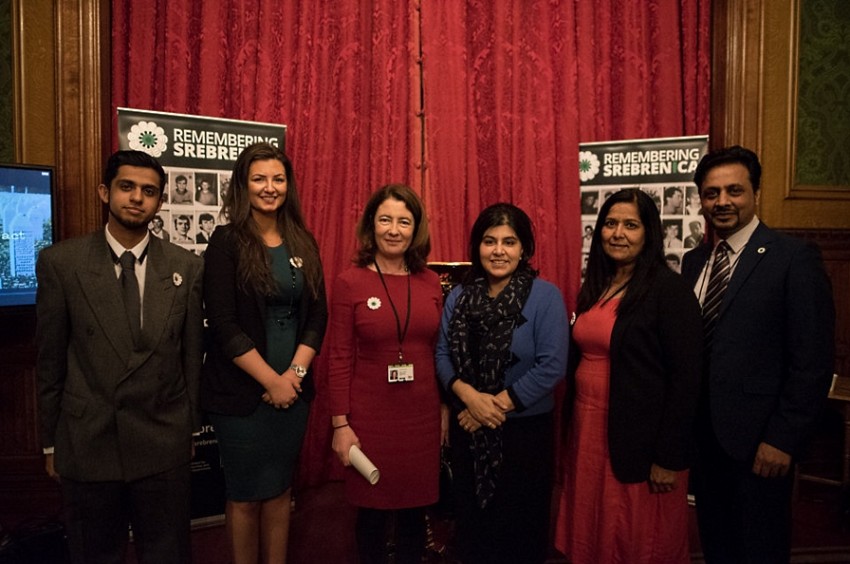 The message was clear as Remembering Srebrenica launched its theme for 2016 – 21 years after the single greatest atrocity in Europe since the Second World War. Over 8,000 Bosnian Muslim men and boys were systematically murdered because of who they were.
Minister of State Baroness Williams of Trafford launched the theme for 2016 –  ‘21: Coming of age – time to act’ – at the House of Lords, in London on Monday 11 January. She was joined by the Lord Speaker Baroness D’Souza, Baroness Sayeeda Warsi, Lord Wallace of Tankerness, Angus Robertson MP and Yasmin Quereshi MP to launch the theme.

The charity aims to engage with Britain’s youth and two young people also spoke at the event. Abdul Farooq is one of five people born in 1995 – the year of the genocide – who took part in the BBC One documentary ‘A Deadly Warning: Srebrenica Revisited’. Amra Mujkanović, also 21, is a Scottish Bosnian who recently helped Remembering Srebrenica launch its Scotland education pack for schools.

“As we begin this 21st year  since the atrocity at Srebrenica, increasing levels of hate crime are being directed at Muslims in Britain. It has never been more important to engage with young people and teach them that such hatred can lead to genocide. Twenty-one represents a coming of age and a passage into adulthood. Thousands of Bosnian young people never had the chance to live their dreams and live their lives. But Britain’s youth can join forces across generations and faiths to stand firm against hatred and help create safer, stronger, more cohesive communities in the UK.”

Amra was born in Scotland after her parents fled the Bosnian War in 1993 and settled near Edinburgh. She has joined the Scotland board of Remembering Srebrenica, which is organising the 21st anniversary commemoration in Scotland this year. She told the assembled guests:

“I have three generations before me who survived concentration camps. My great grandfather, who survived Auschwitz, my grandfather who was in a concentration camp at Trnopolje and my father, who was imprisoned, starved and tortured at camps including Omarska. That’s something that you read about in history books but can’t quite relate to it. Growing up in the UK, I witnessed first-hand how the nation remembered many global atrocities, yet there was never one for us. It felt as if our suffering wasn’t important enough to be remembered by the world. I know this isn’t the case anymore. Remembering Srebrenica is not only helping inform people of the war and events that took place, but you are helping Bosnians across the world to heal. You show us that we are not alone. For this I cannot thank you enough.”

Abdul is a second-year medical student in London. Since returning from Srebrenica in February last year, he has written articles and spoken in public on his experience. He told guests:

“For me, the most important point to learn from Srebrenica is that small intolerances led to prejudice, hatred and, ultimately, genocide. The recent rise in islamophobia worries me as even at home a part of the population has become a scapegoat for wider issues in the world. As a society we must learn to reject these attitudes as they add fuel to the fire and, in extreme cases, lead to horrific attacks on individuals. Whether by educating ourselves about Srebrenica or getting to know our neighbours, each of us can honour the dead by working to reduce intolerance in our community.”

Remembering Srebrenica raises awareness of the genocide in the UK. It works with people of all ages, backgrounds and faiths across Britain to help strengthen our society by learning the lessons of history to help tackle hatred, racism and intolerance wherever it occurs. The charity takes individuals from communities across the UK to Srebrenica to speak to survivors and families whose loved ones were killed.

“This is an important moment to make sure that our messages about Srebrenica are heard louder and wider than ever before. Britain is the first and only country to hold a Srebrenica memorial Day; we need to tell the rest of Europe that they need one too. Hate crime and Islamophobia are increasing. We must remember the generation lost in Srebrenica, but also make sure that we never lose another generation – either here, in Europe or anywhere else – to hatred.”

“Hatred not only affects individuals but can destroy communities and nations –Srebrenica teaches us this. Our young people can challenge hatred of all kinds by commemorating the genocide and applying its lessons in their community. Remembering Srebrenica calls upon Britain’s young people to take action against hatred in this landmark year. United against prejudice and intolerance of all kinds, we can build a better society.”