London, United Kingdom — This past July marked 25 years since the genocide in Bosnia and Herzegovina, often referred to as the worst atrocity on Europe’s soil since the Holocaust. The story of Srebrenica, a small town in Bosnia, remains a dark stain on Europe’s history and yet the full details remain unknown to many.

This October 22nd, the British charity Remembering Srebrenica UK, in partnership with Message Heard, set out to change that by launching the pioneering production “Untold Killing”, the first podcast of its kind in the English.

The six-episode podcast will explore the narrative of what transpired of the course of several days in July of 1995 where more than 8,000 Bosniak-Muslims were murdered in the small town of Srebrenica. The podcast series covers months of detailed research, production, and interviews, both in the United Kingdom and Bosnia, where the brutal atrocity took place. Genocide survivors, academics, experts, and individuals from the International Criminal Tribunal for the Former Yugoslavia (ICTY) all lend their voices and expertise to the podcast.

“It is painful, extremely painful to remember those days in 1995 but I must do it, not just because of my loved ones and myself but because of the future generations, who must learn from what happened to us in Srebrenica and pave the path towards genocide prevention” stated Kadefa Rizvanovic, a genocide survivor from Srebrenica who lost her husband and numerous relatives in the genocide and graciously shared her story with the podcast. 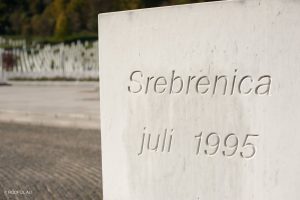 25 years after the genocide in Bosnia and Herzegovina, many survivors continue to struggle to tell their story and many are still searching for the remains of those they lost in order to put them to rest. Each year on July 11th, a mass burial is held at the Srebrenica Memorial Centre where the remains of those found in mass graves are collectively buried.

The genocide in Srebrenica is considered to be part of the wider campaign of ethnic cleansing and crimes against humanity which took place during the Bosnian War between 1992-1996. For many academics and experts, Srebrenica is considered the final point of the genocidal campaign of ethnic cleansing perpetrated by Serb forces, however the horrific acts that took place in Srebrenica remain the only ones to be ruled as genocide legally at the ICTY. On November 22nd, 2017 Ratko Mladic, the former Bosnian-Serb military commander was convicted of various crimes against humanity, including genocide for his role in the events that took place in Srebrenica.
“Untold Killing” sets out to tell the story of the genocide and the International Community’s role within it. At the root of the podcast is education, but it is also a way to honour the victims and survivors.

Jake Warren, a producer from Message Heard, states that “the podcast is the perfect balance between a vehicle for storytelling and education to as wide of an audience as possible.”

Message Heard and Remembering Srebrenica UK entered the partnership to produce “Untold Killing” and uncover the truth to a wider audience in a unique manner. Podcasts offer a distinctive vehicle to hear the truth in all of its brutality, but even more so the podcast “Untold Killing” will allow listeners to reflect on the atrocity which took place only 25 years ago and with that combat genocide denialism.
“My hope is that while listening to this podcast people, particularly young people, will learn what happened in Srebrenica and obtain a greater understanding of issues that will enable them to tackle hatred and intolerance in their own communities”, says Chairman of Remembering Srebrenica, Dr. Waqar Azmi. 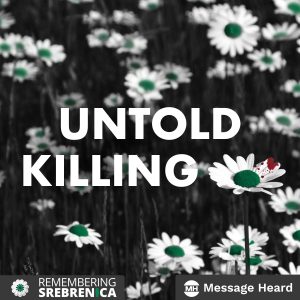 To mark the launch of the podcast, Remembering Srebrenica UK will be hosting a series of webinars where guests will discuss the importance of preserving the memory of genocide, combatting genocide denialism, and the trauma that has remained part of the Bosniak people due to the genocide. Guests will include academics such as Dr. David Pettigrew and survivors such as Hasan Hasanovic. You can sign up for the first event here.

The trailer of “Untold Killing was released on July 11th, the anniversary of the genocide, and can be viewed here. The first episode which releases on October 22nd will feature the testimonials of genocide survivor Kadefa Rizanovic, along with Emir Suljagic, the Director of the Srebrenica Memorial Centre in Bosnia. The podcast will be available to download and subscribe to on Spotify, Apple Podcasts, Google podcast, and other platforms including on Message Heard.