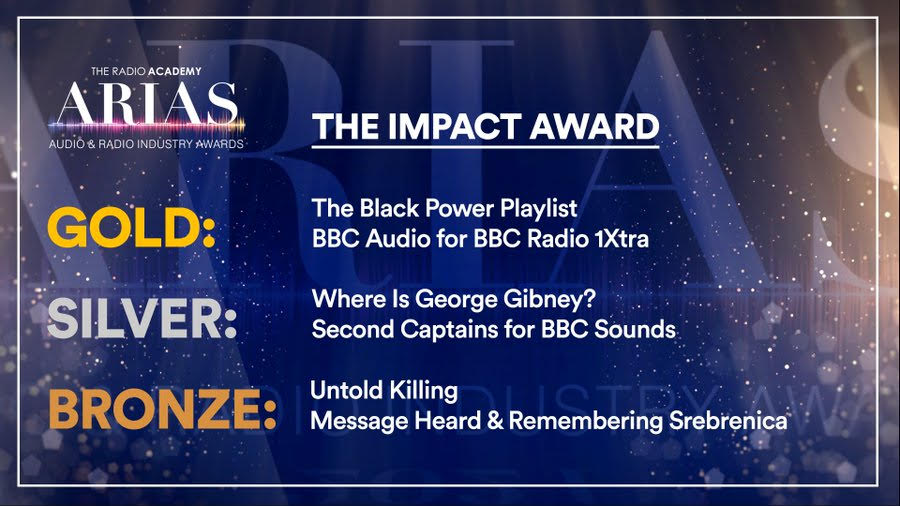 The British Radio Academy, often refered to as the Oscars of the Audio and Radio industry, has unveiled the nominees and award winners in the 25 categories who have been recognised as the best in audio and radio; amongst them Remembering Srebrenica’s podcast “Untold Killing” which has been developed in partnership with Message Heard to commemorate the 25th anniversary of the worst atrocity on Europe’s soil.

The six-episode podcast “Untold Killing” explores the narrative of what transpired over the course of several days in July of 1995 where more than 8,000 Bosniak-Muslims were murdered in the small town of Srebrenica. The pioneering production is the first of its kind in the English language and featured exclusive survivor testimonials and expert analysis of the lead up to the genocide. The podcast explored in depth the events that transpired in Srebrenica with academics and individuals from the International Commission for Missing Persons and the prosecution for the International Criminal Tribunal for the Former Yugoslavia (ICTY) contributing.

The crimes against humanity which are depicted in depth are invaluable for understanding the genocide in its full complexity.

The podcast featured voices of survivors such as Jasmin Jusuf-Jusufovic who stated he lent his voice and his story to the podcast due to his “conviction to spread the story of the genocide against Bosniaks wherever he could”. Jusfovic states “I’ve received feedback from around the world, which was enormously emotional to me, having realised that people are listening to our story.”

The genocide in Srebrenica is considered to be part of the wider campaign of ethnic cleansing and crimes against humanity which took place during the Bosnian War between 1992-1996. For many academics and experts, Srebrenica is considered the final point of the genocidal campaign of ethnic cleansing perpetrated by Serb forces, however the horrific acts that took place in Srebrenica remain the only ones to be ruled as genocide legally at the ICTY. On November 22nd, 2017 Ratko Mladic, the former Bosnian-Serb military commander was convicted of various crimes against humanity, including genocide for his role in the events that took place in Srebrenica.

The Chairman of Remembering Srebrenica, Dr. Waqar Azmi, stated “We knew the importance of this story and our hope was always that people, particularly younger generations, would learn what happened in Srebrenica and obtain a greater understanding of the issues surrounding such crimes which will enable them to tackle hatred and intolerance in their own communities”. Dr. Azmi added him and the organisation feel extremely honoured by the nomination and the awards and proud that the important narrative was getting the recognition it deserves.

Message Heard and Remembering Srebrenica UK entered the partnership to produce “Untold Killing” and uncover the truth to a wider audience in a unique manner. Podcasts offer a distinctive vehicle to hear the truth in all of its brutality, but even more so the podcast “Untold Killing” has allowed listeners to reflect on the atrocity which took place only 25 years ago and with that equip everyone to combat genocide denialism. To date over 88,000 people have listened to the podcast.

Jake Warren, the CEO of Message Heard, stated that it felt gratifying to see Untold Killing getting the recognition it so richly deserved with 2 nominations. “It proves that the faith shown from both Message Heard and Remembering Srebrenica in utilising podcasting as a vehicle to empower survivors to share their testimonies, to educate a wider mass audience and to create a high-quality documentary truly works.”

The 2021 Radio Academy awards, one of the biggest nights in the Audio and Radio industry, were streamed live on the 26th of May at 5:30 pm due to the coronavirus pandemic. The podcast “Untold Killing” is available to download and subscribe to on Spotify, Apple Podcasts, Google podcast, and other platforms including on Message Heard.