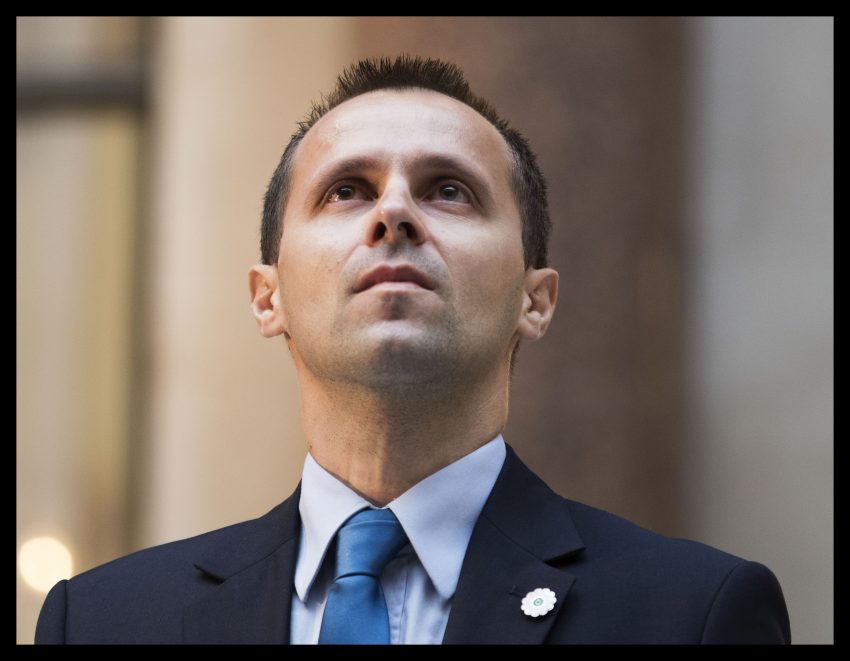 A survivor of the Srebrenica genocide is to receive an Honorary Doctorate from the University of Bedfordshire for his outstanding commitment to Human Rights.

Remembering Srebrenica Ambassador, Bosnian Muslim Nedžad Avdić, incredibly escaped death at the hands of Bosnian Serb forces in July 1995 and has devoted his life to speaking out on the need to tackle hatred and bring communities together to prevent similar atrocities from happening to others.

Nedžad and his family had to flee their home after it was attacked and undertook a perilous journey to the “safe area” of Srebrenica. However, when Srebrenica fell and the town was besieged by the Bosnian Serb army, he fled again, aged 17, with his father and uncle. They were captured with thousands of others and taken to an execution site, yet Nedžad and just one other man escaped, after he was shot in the stomach, arm and left foot, but the bullet missed his vital organs. After lying among the dead bodies, they waited for a chance to escape through the woods to safety. Today, he is back living in Srebrenica with his wife and three daughters.

Mr Avdić explained what receiving the Honorary Doctorate means to him:

“I am honoured and immensely grateful to the University of Bedfordshire, because I feel that this is not just an award that has been given to me; this is an award for all those who fight for justice in a dignified way. It is easy to lose hope, but this Doctorate gives me back that hope and a new strength to keep going forward. I know that I must never stop telling the world that hatred cannot bring anything good.”

UK charity Remembering Srebrenica took staff and students from the University of Bedfordshire to Bosnia-Herzegovina on their ‘Lessons from Srebrenica’ educational visit programme where they met Nedžad and other survivors of the genocide. Following this, they also arranged for Mr Avdić to travel to Bedfordshire to speak to hundreds of students about his experiences last year.

Bill Rammell, Vice Chancellor of the University of Bedfordshire, said:

“It is our honour to confer this Honorary Doctor of Philosophy on Nedžad for his outstanding contribution to human rights. It is also a privilege that Nedžad will be delivering a lecture during his visit to the University.

Nedžad is an inspiration to us all. In spite of all he’s been through Nedžad continues to reject hatred and campaigns tirelessly so that others will never have to suffer as he has.”

Following the graduation ceremony on Monday 24 April, Nedžad will travel to Gloucestershire to recount his experiences to school, college and university students there, along with Remembering Srebrenica’s Resad Trbonja, who lived through the siege of Sarajevo and now works tirelessly leading visits to help others learn from the Srebrenica genocide.

“Nedžad’s dedication to sharing his story with young people is incredible and, although hearing such personal accounts of tragedy is moving and difficult, we have seen the impact it has on them. By teaching about the consequences of hatred through such first-hand testimony, we can inspire young people to take personal actions that help to build stronger, more cohesive communities and ensure Srebrenica is never forgotten.”

What Remembering Srebrenica Do

Remembering Srebrenica works to honour and remember the victims and survivors of the genocide and learn lessons from the worst atrocity on European soil since World War Two to show where hatred and discrimination can lead.

It organises the UK Srebrenica Memorial Day on the internationally recognised day of remembrance for the victims of the genocide on 11 July and works with Community Champions across the country to put on over 400 other community action events. They also organise educational activities, such as the ‘Lessons from Srebrenica’ programme and providing free resources for teachers to download from their website.