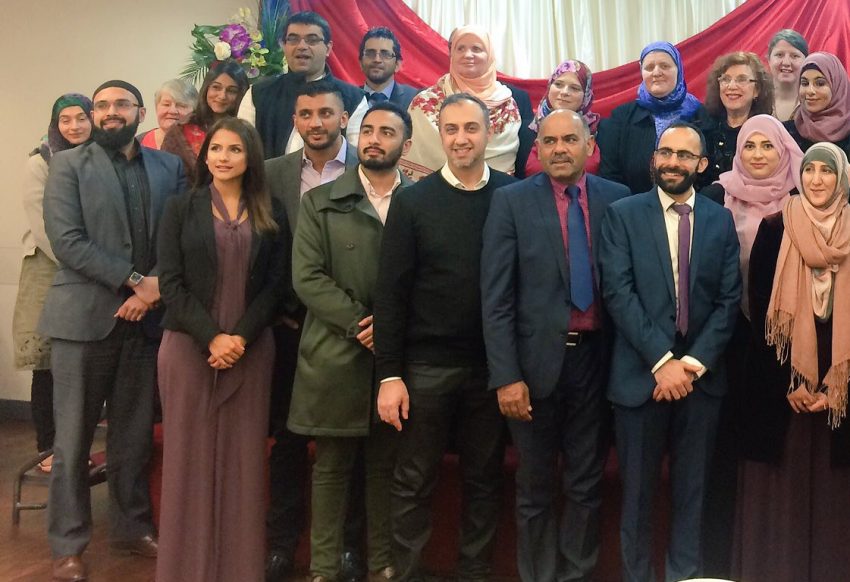 Some of the North West’s most dedicated volunteers were recognised for their work to build better communities at the Remembering Srebrenica Cohesive Society Awards in Manchester last week.

From an Interfaith Civic Commemoration at Manchester Cathedral to a flash mob handing out white flowers of peace to Manchester shoppers, Remembering Srebrenica’s volunteers in the North West put on 52 community action events attended by thousands of people to bring communities together and unite against hatred last July. The charity’s message in all these commemorations was to embrace difference while remembering the victims of the worst atrocity on European soil since World War Two.

Attending the event were senior figures from the police, including the Chief Inspector and Police and Crime Commisioner, elected representatives from four different councils, leading figures from faith groups, community groups and local schools.

“We must remember Srebrenica in order to honour the victims & challenge hatred in our communities today”.

Hundreds of votes were cast online for nominees in six categories.

With the invaluable support of Canon Philip Barratt, Armaan Chohan, Chief Inspector Umer Khan and Supt Jim Liggett, Elinor Chohan organised the civic event in Manchester Cathedral. Over 300 people attended the interfaith service which brought together leaders of different faiths speaking on the importance of learning from each other and getting to know our neighbours, as well as survivors from Bosnia who spoke about the dangers of hatred and why we must unite against it.

Katie Parker and Aisha Mirza won the award for Best Community-Focused Event for their Srebrenica fundraising dinner and community day which had over 200 people in attendance. Katie and Aisha joined together with a team of Community Champions and the Bosnian community in Manchester to organise the cultural day and evening event. These saw diverse women of all faiths, ages and backgrounds build friendships in order to share the Lessons of Srebrenica. The event raised over £1,000 for Remembering Srebrenica and the Bosnia School in Manchester.
Organisers of the UK’s first ever Srebrenica Peace March.

As a symbolic end to Srebrenica Memorial Week in the 21st anniversary of the genocide, 21 Remembering Srebrenica Community Champions walked just over 21 miles between Blackburn and Manchester Cathedrals, visiting different faith venues along the way. This brought diverse communities together in remembrance, as well as the participants walking in solidarity with the survivors, mirroring the powerful ‘Mars Mira’ peace walk which takes place annually in Srebrenica.

Winners of the award for Best Educational Event were The Muslim Jewish Forum of Greater Manchester for their Srebrenica commemoration held at Manchester’s Multifaith Centre. Remembering Srebrenica Champions Qaisra Sharaz and Cllr Heather Fletcher worked together to hold the event, which included a minute’s silence and aimed to educate attendees on the lessons from Srebrenica, particularly to show what hatred and intolerance could lead to when it goes unchallenged.

For Manchester’s ‘Flower Flashmob’. For the second year in a row Farah worked to organise and co-ordinate this special event, which consisted of handing out white flowers to members of the public as a beautiful symbol of peace, and to open up a conversation about Srebrenica with passers-by. This bold and unique way of raising awareness ensured people who have not had the opportunity to learn about Srebrenica could do so and sparked dialogue with strangers and friends alike.

For her incredible support at events and her hard work behind the scenes at so many; most notably for the “flower flashmob” and at the Bosnian Cultural Day and Fundraising Dinner, helping with the coordination of volunteers and with publicising the community action. Outside of Memorial Week, Amna has also organised her own community action, and has spoken on Srebrenica at multiple other community action events throughout the region for Women’s History Month.

A well-deserved award for Community Champion 2016 went to Steven Baker. He has demonstrated an exceptional commitment to raising awareness of Srebrenica in Cheshire and the Wirral for several years, and this July he secured our first ever prison commemoration. Steven has committed to speaking and presenting in a voluntary capacity on dozens of occasions and has also integrated the Lessons of Srebrenica into much of his work. Having formerly worked with the International Criminal Tribunal for the Former Yugoslavia in Bosnia-Herzegovina, Steven has generously offered his invaluable insights to members of different communities, faiths, and educational institutions, including speaking at Holocaust Memorial events.