The Importance of Speaking out- Reflections on Hate Crime Awareness Week 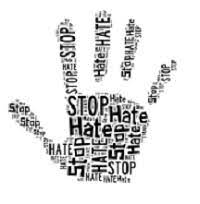 This past week marked Hate Crime Awareness Week, in which organisations throughout the United Kingdom came together to speak about hate crime and offer ways of how to help the public get assistance should they be victims of it. Hate crime incidents are on the rise in the United Kingdom and have been for several years now, but prior to hate crime incidents occurring there are root issues that lead to such dreadful crimes.

As the chairman of Remembering Srebrenica, an organisation founded to mark Srebrenica Memorial Day and remember the victims of the worst atrocity on European soil since World War Two, I have become intimately familiar with the consequences of hate. In these past seven years, I have had the enormous ho 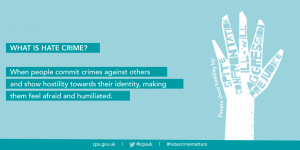 nour of speaking to and listening to survivors of genocide who saw their lives decimated by hatred. That hatred did not come overnight, it began slowly, and it started, as these things often do, with words.

Hate crime incidents often start with words as well, whether that be through antagonistic wording in the media which targets certain groups or through the wording of those we look up to. This is precisely why each of us has the responsibility to stand up and speak out against hatred and hateful words.

In Bosnia and Herzegovina, a country that was once united across ethnicities, it was the words of the powerful and influential leaders that eventually led to the rise of ethno-nationalism that would become responsible for the destruction of hundreds of thousands of lives. In Srebrenica, a place where people used to live alongside each other in peace, over 8,000 Bosniak-Muslims were massacred just because they were a different ethnicity and religion. The hatred that led to one of the worst modern atrocities had such as lasting impact that even now, 25 years after the genocide, survivors are harassed for their ethnicity and their religion.
Between 2018 and 2019, there have been 103,379 hate crimes recorded in England and Wales, a steady rise that has more than doubled since 2013 according to government figures. According to that same data, around half of all religious hate crimes offences were against Muslim people and hate crime against Jewish people has almost doubled in that same period too. The majority of the hate crimes recorded in 2019 were race related. These figures should be a cause for alarm for all of us, particularly those of us who are working to create stronger and more united communities within the UK. 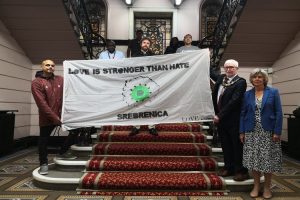 This Hate Crime Awareness Week, I wish to encourage anyone who may have been a victim of a hate crime to report it different agencies, whether that be the police, local authority or a charity. Reporting hate crimes ensures that victims get the support they need and can lead to ensuring your local area becomes a much safer place.

For everyone else, my hope is that we all do what we can to uphold the dignity and safety of each and every human life whether they are threatened by hateful words or hateful acts. Together, we can build a better and a more peaceful life for us all.

Read More »
PrevPreviousOpen Letter of Concern to Governments on Crimes Against Humanity and Genocide Against Uyghurs in China
Next“Untold Killing”: first serialised podcast about the genocide in Bosnia launchedNext