Teachers Learn The Lessons From Srebrenica 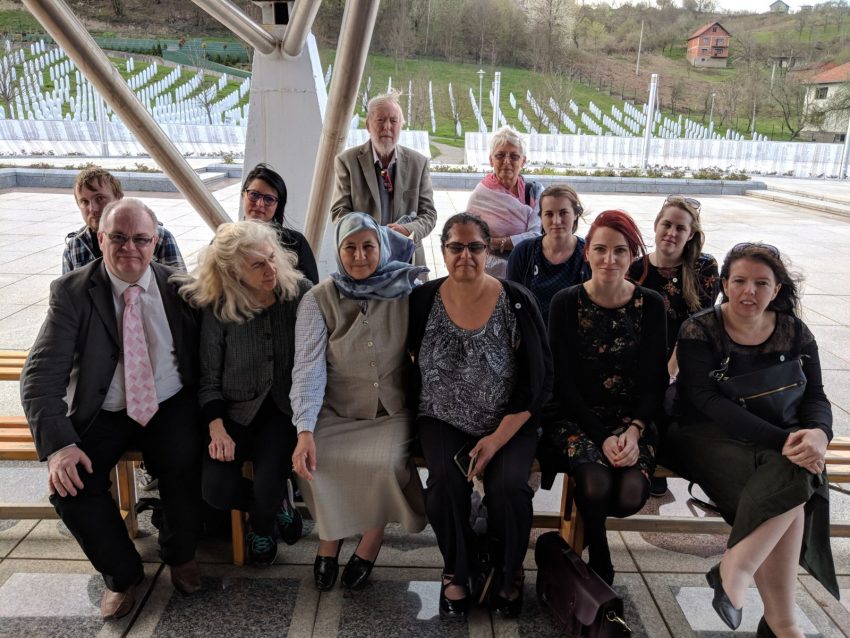 In April 2018, a group of teachers, educators and outreach workers returned from a powerful four-day ‘Lessons from Srebrenica’ delegation in Bosnia-Herzegovina (BiH).
Among the delegates were Matthew Johnson a freelance tutor who works with ‘Hope not Hate’ to deliver their education program in schools, Gurdeep Hanspaul Partnerships and Project Manager at Victim Support and secondary school teachers from London, South Yorkshire and the Midlands.

As part of the delegation, the group had a guided tour of Sarajevo, the capital of BiH. Their guide was Rešad Trbonja, a survivor of the ‘Siege of Sarajevo’-the longest bombardment of a capital city in the history of modern warfare. Rešad told the group how his world changed overnight. Describing his experiences, Rešad said “I was just an ordinary European teenager, 19 years old, in my jeans and Converse, really into punk music. The next day, after the declaration of independence, the shelling started and ordinary Sarajevans were under attack”.

“Don’t just live next to your neighbours, live with them. Rešad’s moving story taught me that we need to treasure the diverse society we have in the UK and work hard to protect it. The warmth and wisdom shown by the survivors we spoke to was inspiring”

The group of educators paid their respects at the Srebrenica Memorial site in Potočari where over 8000 Muslim men and boys were systematically killed because of their faith.  Whilst in Potočari, the delegates met with Fadila Efendić- one of the many mothers who lost their sons in the Srebrenica genocide. Fadila’s story, which she bravely shared, demonstrates the consequences of hatred if left unchecked.

These stories contain powerful lessons for young people, namely that at the root of this devastation in Srebrenica lies prejudice, hatred and fear, spread by those who seek to divide us.

“I know the memories, I have formed on this delegation will remain with me long after I return to London. The warmth of the people and the richness of the country’s culture will stay with me but so will, memories of anger and despair that 23 years ago the international community stood aside and rendered ‘never again’ meaningless”.

The teachers and educators will take away knowledge of how hatred, if left unchecked, can lead to violence. Over the coming months, they will pass on these lessons to their students and become ‘Community Champions’ who speak out against hate.