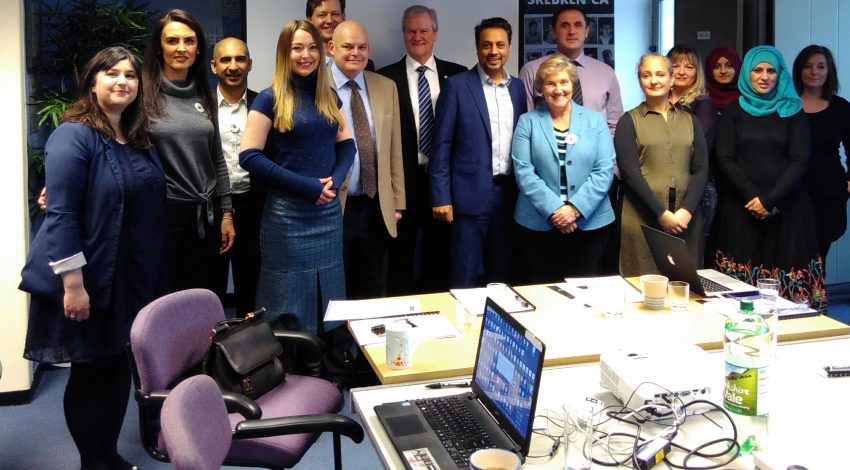 Whilst regional and country boards meet at least quarterly, the UK National Board meets twice a year to review work carried out in the previous year, agree plans and priorities for the following year and learn best practice from each other.

Remember
We have ensured Srebrenica is not forgotten through a programme of national and local community action. In each of the past two years, we have held national community action events in all four countries of the UK. The flagship UK event in London was supported by the highest level of government and was attended by a wide spectrum of communities, faiths, ages and political associations. Through the work of our Community Champions, we have held 400 local events across the country during this period. Through the grassroots community action we have reached 50,000 people.

Learn
Since our creation, over 900 UK citizens have travelled to Srebrenica as part the ‘Lessons from Srebrenica’ visit programme and returned to the UK as Community Champions. Alongside this, our education work with schools and young people is ensuring the lessons from Srebrenica are learned by a new generation. 32,000 children have benefitted from our educational initiatives, including using lesson packs created in partnership with the PSHE Association, taking part in the 8-3-7-2 Srebrenica Memorial football tournament and hearing directly from survivors of the genocide who travel over to the UK.

Pledge
Over a two-year period 661 pledges and social action projects have been completed by Community Champions who have taken part in the ‘Lessons from Srebrenica’ programme. As well as organising commemorations in Memorial Week, Community Champions are building their pledge work into other areas such as Holocaust Memorial Day, Hate Crime Awareness Week and the International Day for the Elimination of Violence Against Women.

In addition to this, our success in raising awareness was also demonstrated through the fact that during Memorial Weeks 2015 and 2016, an estimated 109 million opportunities were created for people across the UK to access our key messaging via broadcast, print and online outlets.

Sharing Good Practice
Elinor Chohan, Chair of Remembering Srebrenica’s North West Board, gave a presentation on how Greater Manchester Police (GMP) has incorporated Srebrenica into its hate crime training and gave details on Remembering Srebrenica’s inaugural mentoring delegation. She explained how one delegation can have such a big impact. For example, GMP police cadets will be trained on hate crime by learning about Srebrenica, there will be a two-day conference on hate crime and the delegates will speak to a cross-party group on tackling anti-Muslim hatred. 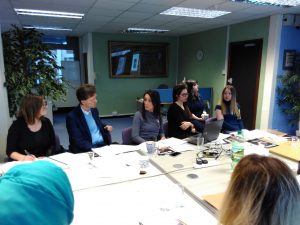 The Very Rev Dr Lorna Hood, Chair of Remembering Srebrenica Scotland, gave a presentation on the launch and promotion of the education pack in Scotland. They arranged a photo call with the leaders of each of Scotland’s political parties; First Minister, Nicola Sturgeon of the SNP, Kezia Dugdale MSP of the Labour Party, Ruth Davidson MSP of the Conservative Party, Willie Rennie MSP of the Liberal Democrats and Patrick Harvie MSP, Co-convener of the Scottish Greens, holding the pack. Dr Hood also spoke at a conference of head teachers. She will be delivering lectures to schools in April and hopes to make links with the new Education Minister in Scotland. 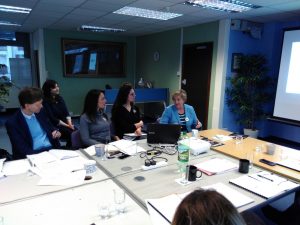 Peter Osborne, Chair of Remembering Srebrenica Northern Ireland as well as the Community Relations Council, then spoke on developing the Board in Northern Ireland. Mr Osborne detailed the work the board is currently undertaking, such as taking part in Holocaust Memorial Day, and an interfaith event that was recently held in a synagogue, as well as their plans for the national commemoration in July. The board has been recently established, but has high calibre members and high ambitions.

Anousheh Haghdadi provided a thorough overview of Remembering Srebrenica’s theme for 2017: ‘Breaking the Silence: Gender and Genocide’. She detailed the decision-making process and how it is timely considering that misogyny is beginning to be recognised as a hate crime. The theme will be divided into three sub-themes: Gender and Genocide, Women’s Courage and Seeking Truth and Justice.

Guest speakers also made significant contributions to the meeting. Dr Eric Gordy of University College London provided an insightful overview of the current situation in Bosnia today. He said that the verdict of the last remaining ICTY cases will pose the bigger question as to whether the violence in Bosnia-Herzegovina occurred in the context of a civil war or from the aggression of an external state and also if genocide was a one-off event at Srebrenica or if it was a process that began in 1992.

Richard Burden MP, who is Shadow Minister for Transport and Vice Chair of the All-Party Parliamentary Group (APPG) on Commemorating Srebrenica, spoke on why Srebrenica is important to him and what it means for the UK today. He briefly outlined the role of the APPG, and how it is a network to bring parliamentarians together. He stressed the importance of understanding where xenophobic attitudes come from so that we can tackle it before it becomes dangerous.

Dr Louise Livesey from the University of Gloucester gave a presentation on breaking the silence of misogyny and violence against women in the UK. She explored how racism and sexism work in tandem, and quoted how women of minority ethnic backgrounds are disproportionally affected by gendered violence in and outside the home. She went on to explain how the systematic gendering process of society spreads to genocide and how there are parallels between how both sexual violence and genocide are spoken about and denied.

Remembering Srebrenica’s UK National Board meetings are also attended by two representatives from the Bosnian Community; Anes Ceric, Secretary of the Bosnia Diaspora World Network and Edina Hodzic, President of the UK-BiH Society, both of whom made valuable contributions throughout the meeting.

Dr Waqar Azmi OBE, Chair of Remembering Srebrenica, thanked the regional and country boards for all their hard work. He emphasised that the great achievements of Remembering Srebrenica are due to the dedication of our boards and Community Champions, who are working day and night, bringing communities together across the UK to unite against hatred and intolerance and build a safer, more cohesive society.