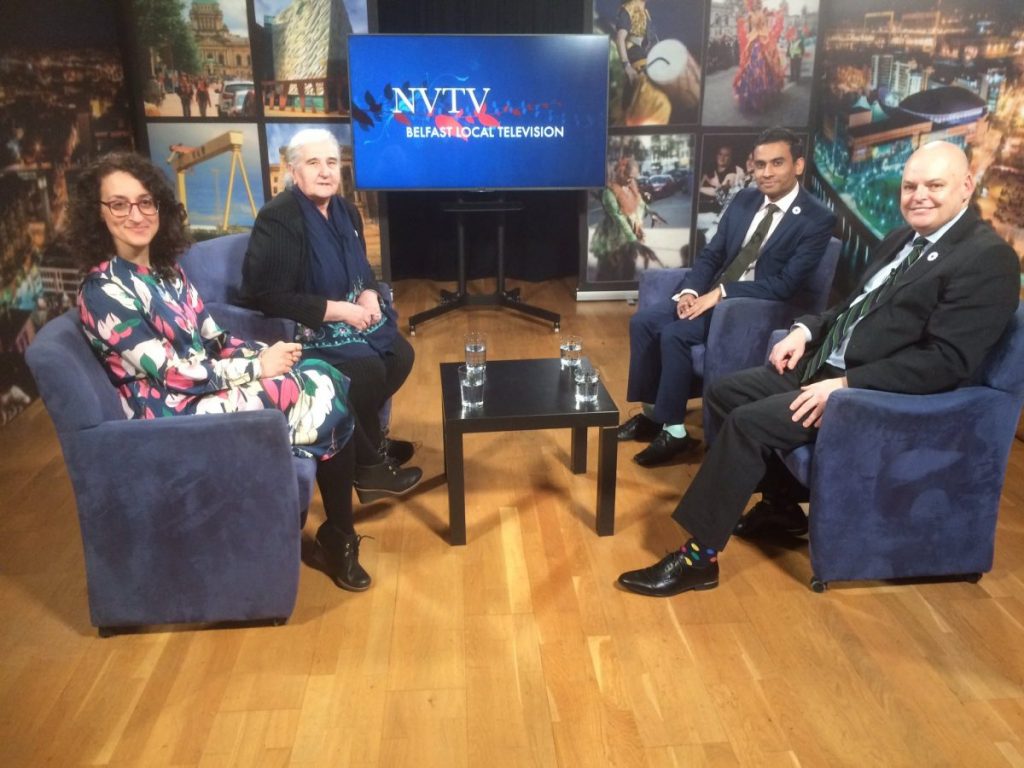 Remembering Srebrenica UK’s visit to Belfast was a resounding success after dignitaries, politicians, faith leaders and pupils were all moved by the stories of Bosnian survivors.

President of the Association of the Mothers of Srebrenica and Žepa Enclaves Munira Subašić and Remembering Srebrenica Director in Bosnia Elmina Kulašić were invited by Belfast City Council to speak at several high profile community action events.

Their visit was featured heavily in the media with both women taking to the airwaves on BBC Good Morning Ulster and on NVTV.

The trip was especially poignant as Northern Ireland is currently undergoing its own period of reconciliation after decades of sectarian violence in the late 20th Century.

After hearing Munira and Elmina speak The High Sheriff, Councillor Nicola Verner said: “Belfast City Council continues to stand with those who suffered as a result of the Srebrenica genocide and I am honoured to have had the chance to listen to survivors and I commend their campaign to seek the truth and achieve justice in a peaceful way.”

Councillor John Kyle, Chair of Shared City Partnership added: “I am inspired by the actions of survivors like Munira and the Mothers of Srebrenica. Despite everything they have been through, they have never sought vengeance and never acted with hatred. Instead, they have campaigned for justice.”

In a packed four day itinerary the delegation met with councillors and the Lord Mayor at Belfast City Hall, pupils at Girdwood Community Hub, politicians and civil servants at the seat of government, Stormont.

Elmina told the BBC: “Because the first step in understanding what happened is to make the perpetrators on the other side acknowledge that those crimes were committed and that no denial should take place.”

She added: “We haven’t been asked for forgiveness – no one has asked us to forgive – so we sort of go through the process of forgiving ourselves… for not understanding what happened.”

She also explained what people in Northern Ireland could learn from her Bosnian experience, saying: “By sharing stories, especially personal stories, we can see, we cry the same, we want to live in peace the same way and that hatred starts with words.”

The community action events brought together people from different communities and backgrounds, who all spoke of how humbled they were to hear the survivors’ stories and dedication to peace instead of hatred.

Amil Khan, Director of Remembering Srebrenica UK, said: “Northern Ireland and Bosnia have many issues in common after two decades of their peace processes. Issues such as managing diversity, trying to ensure power sharing arrangements in government deliver for everyone, acknowledgement and dealing with the legacy of violence are as pertinent to reconciliation in Bosnia and Srebrenica as they are in Northern Ireland.

“I’d like to thank everyone involved in the visit as it was a very powerful and moving few days that have had a profound impact.”