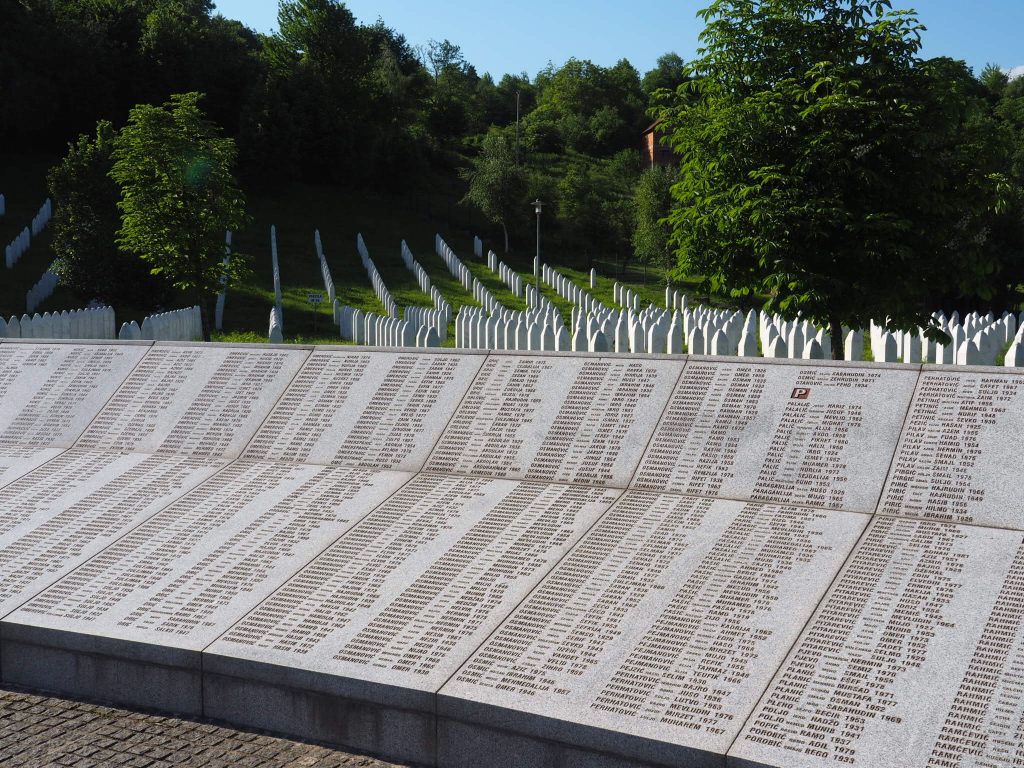 Every year, Remembering Srebrenica selects a theme that reflects an aspect of the genocide that needs to be commemorated, but also speaks to communities here in the UK.

The theme for 2022 is ‘Combatting Denial: Challenging Hatred’.

Described by the United Nations as the ‘worst crime on European soil since the Second World War’, the killings at Srebrenica have been classified as genocide by both the International Court of Justice and the International Criminal Tribunal of the former Yugoslavia.

Despite this unequivocal fact, denial of the Srebrenica genocide as well as the crimes against humanity committed across Bosnia and Herzegovina between 1992 to 1995 remains prevalent amongst individuals and institutions at the highest levels, including the Mayor of Srebrenica, the current political leadership of Republika Srpska and Serbia as well as Russia which vetoed a UN resolution in 2015 to condemn the killings at Srebrenica as a genocide.

Whilst such denial and historical revisionism began immediately following the war, the institutional and political denial of the genocide has increased in the last decade and alarmingly forms part of the regular discourse throughout parts of the Balkans. In the absence of a robust challenge or having to face consequences for this dangerous denial, it has been allowed to flourish. Indeed great efforts to embed the distortions and denial in a systematic manner have been exerted.

Internationally, genocide deniers have shamefully been rewarded with recognition and accolades such as the presitgious Nobel Prize for Literature to Peter Handke  in 2019

Denial brings not only more pain and suffering for the survivors but serves as a rallying call to continue the division and hatred as well as to glorify the murderers. Denial also serves as a significant impediment to peace and reconciliation which can never be achieved without acknowledgement.

As a result, the High Representative for Bosnia-Herzegovina, Valentin Inzko before his departure in July 2021 brought in a law to ban denial of genocide and glorification of mass murderers. However, in response the Assembly of Republika Srpska led by the Serb member of the Presidency of Bosnia and Herzegovina, Milorad Dodik formally voted to adopt a set of resolutions to withdraw from state institutions including raising once again a Bosnian Serb army, the very institution responsible for genocide at Srebrenica.

Denial is the final stage of the ten steps to genocide and is now being used to break up the state of Bosnia and Herzegovina, driven by an ideology of uniting the “Serb world” – an idea alarmingly similar to former President Slobodan Milošević’s “Greater Serbia” which underpinned the Bosnian Serb campaign of the 1990s that culminated in the planned, systematic and industrialised murder of just under 100,000 Muslims, displacement of two million people and the genocidal rape of up to 50,000 women simply because of their identity.

This year’s twin-aimed theme, therefore, seeks to shine a light on the importance of combatting denial and the need to confront the hatred behind the denial.

In the UK, communities are only too aware of the damaging impact that denial can have for individuals and community cohesion.

Victims of serious crime can often be subjected to further trauma when having to confront perpetrators in a court of law who deny that they have committed their crimes. In addition to denial, the perpetrators seek to minimise what they have done or concoct a version of events based on alternative facts that reverses the blame which is placed upon the victim. This exacerbates the suffering of the victims and can deter many from coming forward to report incidents out of fear of having to face the denial which increases the painful experiences that they have had to endure.

Home Office figures reveal a worrying trend across the country in which the number of hate crimes recorded have doubled in the space of five years. Reported hate crimes have increased by 9% since last year to a record 124,091, with nearly three quarters of those incidents being racially motivated crimes. These sobering statistics underline the scale of the problem which our communities face, yet there are still those who continue to deny the seriousness of the issue which needs to be addressed and fail to take the action required, despite these statistics and the lived experiences of those on the receiving end of such hate crime.

Consequently, this year’s theme will encourage people to recognise the important role that they can play in combating denial to help build safer, stronger communities.

In an age of social media where many more people now receive their information in snippets from unverified sources online, we have seen the proliferation of fake news making it difficult to distinguish between truth and myths. Divisive propaganda and misinformation is thriving, and clear and established facts are denied and manipulated with minority communities often scapegoated and vilified to create mistrust and promote hatred that threatens community cohesion.

For example, at the start of the pandemic in the UK, those on the far-right exploited the outbreak of Covid-19 to peddle racist conspiracies about British Chinese communities which fuelled prejudices that they were to blame for the coronavirus which resulted in hate crime against these communities rocketing. Similar tactics were used by those possessing anti-Muslim sentiments to portray British Muslims as responsible for not adhering to lockdown rules and spreading Covid by posting images of congregations gathering outside mosques on social media with maliciously false claims that these images had been taken during the pandemic to sow the seeds of hatred and division in our communities.

We therefore hope that the theme will help empower individuals and communities to better understand and confront the denial which emboldens perpetrators and gaslights their victims, in order to help create safer, stronger and more cohesive communities.