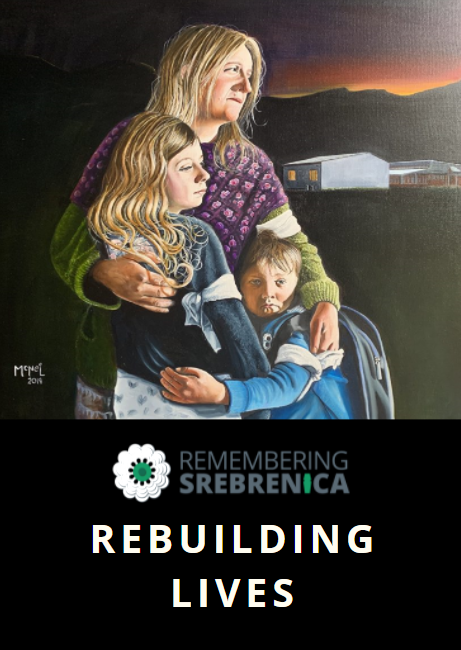 Every time genocide happens, the world says, ‘never again’, yet, as history shows us, it happens again and again. The recurrence of genocides over both short and long time periods means we often forget that those who survive, and those who tried to help prevent or relieve the suffering, must rebuild their lives afterwards. Many do that as refugees in countries that they didn’t chose to come to, but which offered them sanctuary, space and freedom. It is these survivors that this book focuses on in the hope that understanding those journeys and bringing alive these stories will help us recognise the strength, courage and challenges of rebuilding after conflict and genocide.

This book is part of the work of Remembering Srebrenica, a charity dedicated to promoting social cohesion and tackling prejudice and hate in the UK. Genocide may seem an unlikely outcome to readers, young and old, when examining day-to-day experiences, many may see the study of genocide as a purely academic interest. However, we know that the conditions for genocide are built on a climate and culture where ‘lower levels’ of prejudice, discrimination, exclusion and intolerance go unchallenged. Such attitudes and behaviours are part of many people’s experiences and survivingand rebuilding in such an atmosphere is also challenging.

Prejudice, discrimination, exclusion and intolerance do not inevitably lead to genocide, nor is it likely that this will occur; however, these behaviours diminish and degrade members of our communities and prevent them from taking a full role in society. Systematic genocide is built on a failure to challenge these behaviours; failures which can become problematic in specific social conditions. What we must focus on is building the language, strategies, skills and confidence to challenge such behaviours and thus to remove the essential foundations that intolerance needs to thrive.

The story of Srebrenica and the wider atrocities of the Bosnian War is not ancient history; it is a recent event in a European country, but moreover it is a history that member of our UK communities lived through and who’s impact they continue to deal with. Every year, Remembering Srebrenica selects a theme that reflects an aspect of the genocide that must be commemorated, but also speaks to communities here in the UK. Rebuilding Lives is the theme for 2021.

And as we move forwards to rebuilding our communities in the wake of the many health and economic challenges which people with divisive agendas are all too keen to exploit following the pandemic, we focus on the spirit of survivors who, despite the horrendous hatred and destruction they were subjugated to, have been rebuilding their lives with dignity, humanity and without calling for retribution or promoting division.

The theme honours the two million people who were displaced during the genocide and ethnic cleansing in Bosnia in the 1990s, leaving them to seek refuge all over the world and the approximately 10,000 Bosnians who came to the UK. Survivors who have shown inspirational strength and determination, used their experiences to help refugees from all around the world or to speak out against hatred and intolerance in an effort to educate future generations about the devastating consequences that can ensue if prejudice is allowed to flourish unchecked.

The process of rebuilding lives for those who have experienced hatred and discrimination is one which our communities must play an active part in. From the police to the judiciary, to schools, to government institutions and civic society, each and everyone of us has an important contribution to make in order to help rebuild lives to create resilient communities and show that the pernicious forces of hatred and intolerance will not prevail.