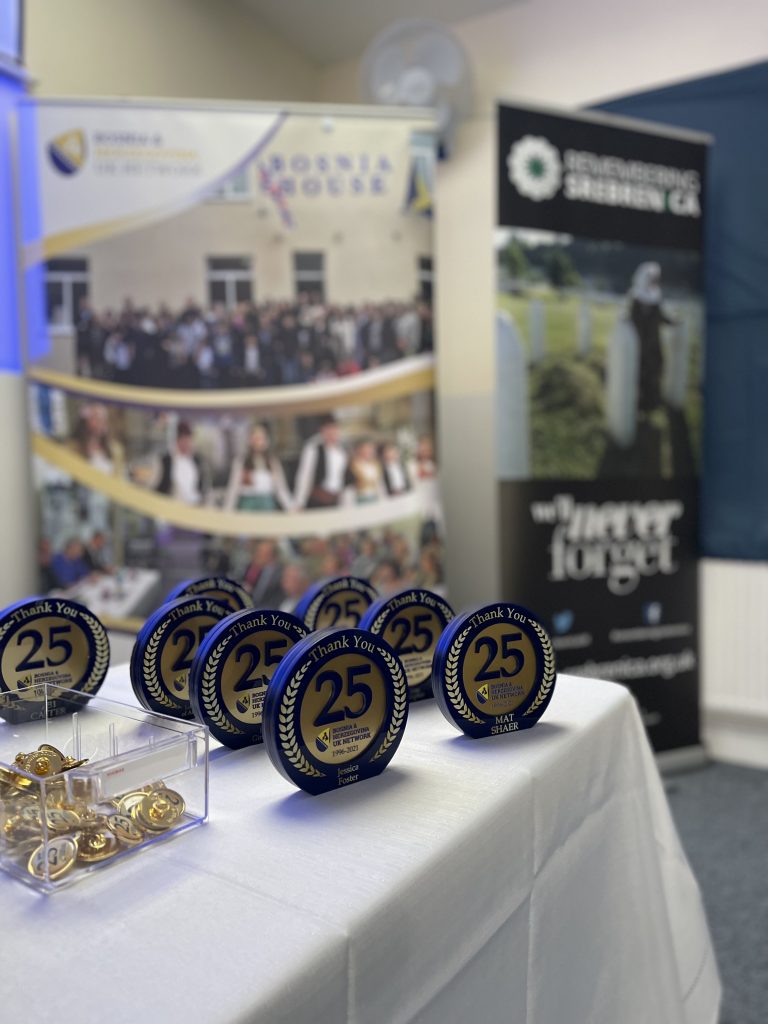 Remembering Srebrenica UK’s eight English regional boards and three country boards in Scotland, Wales and Northern Ireland as well as Community Champions were awarded by survivors of genocide and crimes against humanity in Bosnia and Herzegovina who are now living in the UK.

The UN termed the genocide and crimes against humanity in Bosnia and Herzegovina as the “worst atrocity on European soil since the second world war”.

The ceremony took place at a Community Awards Dinner held at Bosnia House in Birmingham with Chief Guest, Dr Nasir Awan MBE, Deputy Lieutenant in attendance. It was organised by the Bosnia and Herzegovina UK Network which is the national voice of 10,000 British Bosnians living in the UK to thank Remembering Srebrenica for all its work in commemorating the Srebrenica genocide and for teaching people about the dangers of hatred and intolerance.

“The UK is the largest commemorator outside of Bosnia and Herzegovina of Srebrenica memorial events and activities which are organised by Remembering Srebrenica UK through its eight English regional boards and three country boards in Scotland, Wales and Northern Ireland and 1,450 Community Champions. Each year nearly 2,000 Srebrenica memorial events and activities are held during UK Srebrenica Memorial Week in July in schools, town halls, police stations, community centres, mosques, synagogues and churches throughout the UK. We, as a community, wanted to recognise the incredible work taking place and have the opportunity to thank the boards and community champions of Remembering Srebrenica through these awards.”

Last year alone, over 50,000 young people were reached through educational activities which brings the historic reach to over 180,000 young people educated on the lessons from Srebrenica since 2013. Coverage across broadcast, print and online media in the UK generated more than 70 million opportunities to view key messaging with over 15,000 people tuned in to watch the UK National Srebrenica Memorial Day Commemoration online.

Remembering Srebrenica and Message Heard’s podcast Untold Killing won numerous awards last year including the Platinum AVA Award, two ARIAS Awards and the Best Branded Podcast at the Lovie Awards and over 200,000 people have now listened to the podcast.

“There is no greater honour than the survivors of the worst atrocity on European soil since the second world war thanking and awarding Remembering Srebrenica UK, its eleven board chairs and 1,450 community champions in recognition of their tireless and impactful work across the UK in commemorating Srebrenica Memorial Day and raising awareness about where hatred could lead if left unchallenged”.

“I have no doubt that these awards will go a long away in encouraging our thousands of community champions, volunteers, ambassadors, patrons and board members to do more in keeping the memory alive and help build stronger safer communities for all. Thank you Bosnia and Herzegovina UK Network and all members of the Bosnian community for this great honour”.

Each year, Remembering Srebrenica UK selects a theme that not only reflects an aspect of the genocide that must be commemorated, but also speaks to communities in the UK. The theme for 2022 is ‘Combatting Denial: Confronting Hatred’ which was launched at a Parliamentary Reception in the House of Lords last month.

Despite the fact that the atrocity in Srebrenica has been classified as genocide by both the International Court of Justice and the International Criminal Tribunal of the former Yugoslavia denial of the genocide as well as crimes against humanity across Bosnia and Herzegovina remains prevalent amongst individuals and institutions at the highest levels, including the Mayor of Srebrenica, the current political leadership of Republika Srpska and Serbia as well as Russia which vetoed a UN resolution in 2015 to condemn the killings at Srebrenica as a genocide. Moreover, in response to a law to ban denial of genocide and glorification of mass murderers the Assembly of Republika Srpska led by the Serb member of the Presidency of Bosnia and Herzegovina, Milorad Dodik formally voted to adopt a set of resolutions to withdraw from state institutions including raising once again a Bosnian Serb army, the very institution responsible for genocide at Srebrenica.

The President of Remembering Srebrenica, Lord Bourne of Aberystwyth said:

“Denial brings not only more pain and suffering for the survivors but serves as a rallying call to continue the division and hatred as well as to glorify the murderers. Denial also serves as a significant impediment to peace and reconciliation which can never be achieved without acknowledgement”.

“This year’s twin-aimed theme, therefore, seeks to shine a light on the importance of combatting denial and the need to confront the hatred behind the denial and we hope to bring thousands of people together during UK’s Srebrenica Memorial Week which will be taking place from 4th July to 11th July in acts of commemoration to mark Srebrenica Memorial Day”.