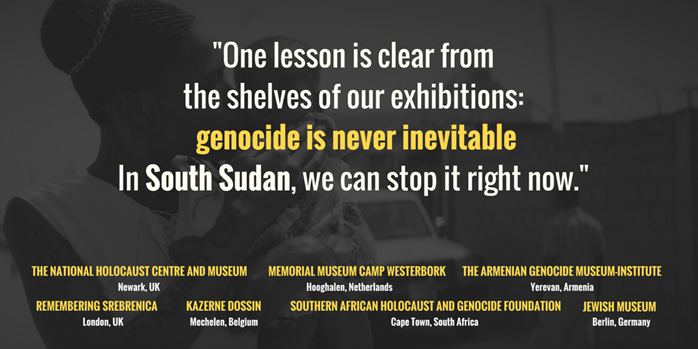 On the third anniversary of South Sudan’s war, Remembering Srebrenica has joined with other genocide charities from around the world to call for action to prevent a genocide from occurring in South Sudan. The full text of the letter is reproduced below:
Holocaust and genocide memorials: Stop a possible genocide in South Sudan

15 December 2016
The world stands by as South Sudan teeters on the edge of catastrophe. Today, on the third anniversary of South Sudan’s war, we urge world leaders to do everything in their power to prevent what could become the 21st century’s first major genocide
We, museums and memorials of genocide around the world, are the custodians of humanity’s darkest memories. Documenting our species at its worst is a grim but necessary task; by knowing our past, we can try to never repeat it.

But remembering is not enough if the lessons go unlearned. And so when the echoes of history resound, those who can speak up, must. Today we are reminded of Elie Wiesel’s words, “We must take sides. Neutrality helps the oppressor, never the victim. Silence encourages the tormentor, never the tormented.”

History – and the exhibits in our museums – tell us what a genocide looks like. There is no mistaking it when untold bodies of innocent women, men and children line the streets, hacked to death; found brutally tortured and murdered in prisons and warehouses; buried in mass graves. But before these brutal images reach our screens, there are warning signs; moments at which we could have acted to stop the slaughter before it begins.

In South Sudan, the signs are already there. Ethnic groups are being set against one another: “Dinka vs. Nuer”, and “Equatorians vs. Dinkas.” The government and military of South Sudan is already dominated by the Dinka ethnicity, stoking tension and grievances among other ethnic groups. Polarizing propaganda is being used to stoke the fires of hatred on social media. Killings are happening ever more frequently along ethnic lines and no one is being held accountable, according to a recent report by the UN Panel of Experts on South Sudan.

There is already “a steady process of ethnic cleansing underway” with armed fighters using “starvation, gang rapes and burning of villages” according to the head of the UN Human Rights Commission for South Sudan. There is marked rise in hate speech and graphic warnings of violence toward particular ethnic groups, according to the UN human rights chief in a recent statement.
The UN Secretary General’s Special Advisor on the Prevention of Genocide, Adama Dieng, rightly says that “genocide is a process” – but it is also a slippery slope. Left unchecked, these warning signs can turn into unspeakable acts of murder in the blink of an eye. Sadly, it was no different in Rwanda, Bosnia and in Europe during the 20th century.

One lesson is clear from the shelves of our exhibitions: genocide is never inevitable. In South Sudan, we can stop it right now. It will take moral, courageous leadership from political leaders in South Sudan who do not want their country’s future to be draped in death. We will need speedy and determined resolve from heads of state in East Africa to stand together to prevent mass atrocities from engulfing their neighbor. And we will need leaders in the broader international community to use every means of political leverage they have – stopping the flow of weapons, holding perpetrators of violence accountable – to avert yet another genocide from happening on our watch.

It is a heavy burden to capture and portray the horrific events of our past to the people of today and the future. But it is a duty that we solemnly carry in the hope that such acts will never happen again. In ten years, we would rather witness the celebration of life and prosperity in South Sudan, and not the breaking of ground on yet another genocide memorial. We are already too many. And it is within ourpower to make this so.