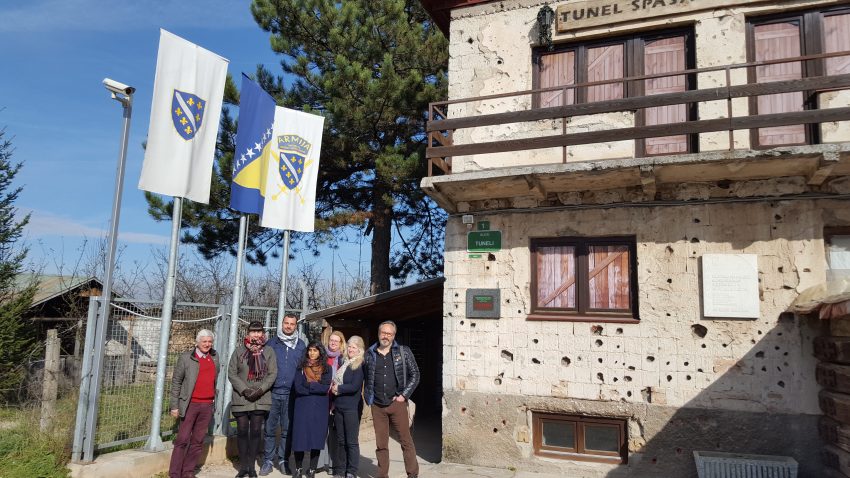 A group from Gloucestershire has returned from a delegation to Bosnia Herzegovina with a mission – to use the lessons from the worst atrocity on European soil since World War II to tackle the rise of hatred and intolerance in the county.

The group visited Sarajevo to learn about the longest siege in modern warfare, Tuzla, to meet with an organisation working with the victims of mass rape, and Srebrenica, where 8,372 Bosnian Muslim men and boys were murdered in an act of genocide.
A key lesson from Srebrenica is that genocide doesn’t happen overnight. It is a slow process of “othering” and dehumanisation, which eventually leads to violence. Dr Louise Livesey, Senior Lecturer in Criminology at the University of Gloucestershire, reflected on the importance of these lessons for post-Brexit UK:

“The visit forces us to reflect on the lessons from the Bosnian genocide and what is happening now in the UK. Whilst we could dismiss the events in Bosnia 21 years ago as extra-ordinary, each single step that led to them is mundane and that’s where the danger lies. By hearing the collective and individual stories of Bosnian men and women it becomes clear how simple it is for prejudice to become acts of inhumanity and how powerful or charismatic figures exploit people’s concerns to make this happen.”

The delegation will be holding a series of community action events across Gloucestershire in 2017 to raise awareness of the genocide and the consequences of hatred left unchecked, as well as undertaking education and social action campaigning around hate crime and sexual violence. This important work will be led by Ms Haghdadi, who said:

“I am delighted to have taken the first Remembering Srebrenica delegation from Gloucestershire. Together, we have borne witness to one of the greatest atrocities in the last century and it is now our duty to share those stories and spread the central message of Srebrenica survivors – to tackle hatred and intolerance wherever we see it. In Bosnia, we learned that hatred rarely proceeds along one axis. People were not just targeted for their ethnicity or religion, but a whole host of factors, including gender. When we think about the divisive political rhetoric across the world, and how this has combined, for example, sexism and racism, we see that we must treat all forms of hatred as interconnected, and work together to challenge this. Hatred is a problem for all of society and each of us bears some responsibility for challenging it. 21 years on from the genocide and with the rise of divisive political rhetoric across the world, the survivors’ message has never been more important”.

If you would like to be involved in Remembering Srebrenica’s work in the region, please contact southwest@srebrenica.org.uk