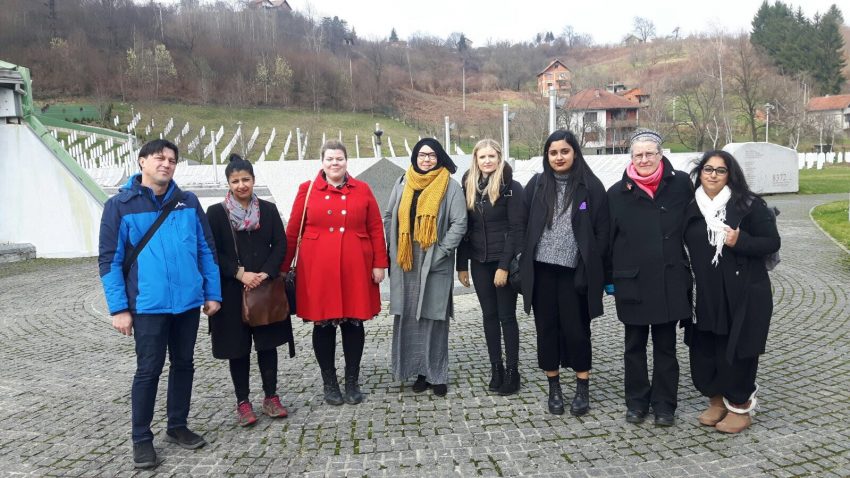 In keeping with our theme this year of ‘Breaking the Silence: Gender and Genocide’ and to mark International Women’s Day, Remembering Srebrenica organised an all-women’s delegation to Srebrenica.

All Women's Delegation to Srebrenica

The group was made up of women representing organisations including Rape Crisis, the National Union of Students, as well journalists, community leaders and those from faith organisations. Their journey in Bosnia focused on the experiences of women in conflict and more specifically on sexual violence.

The group travelled to Potočari to meet with the Mothers of Srebrenica and had the opportunity of meeting staff from Medica Zenica and Snaga žene, organisations which have devoted their work to treating and rehabilitating victims of sexual violence after genocide. As well as gaining an insight into the incredible work that these organisations do, our delegates were able to have open and frank discussions about sexual violence.

With both reported hate crime and violence against women in the UK at an all-time high, it is more important than ever to centralise the stories of women in order to amplify their voices and learn from the grave injustices of the extreme misogyny that took place across Bosnia-Herzegovina. We know that women are more likely to be victims of religious hate crime than men and the root of these crimes is the dehumanisation of others. These are the important lessons the group learnt from the delegation in order to return to the UK and tackle hatred against women in our society.

On the final day of their visit, the delegation met with Bakira Hasečić, President of Women Victims of War Association, who has fought tirelessly to bring perpetrators of sexual violence to justice in both international and domestic courts. As a survivor of wartime sexual violence herself, Bakira is vocal about the need to fight for justice, and the need to break the silence and stigma surrounding sexual violence. Everyone on the delegation was moved and inspired by her story, as well as her message to all women to fight for their rights.

If you would like to hold memorial community action this July which focuses on Gender and Genocide, please contact us at events@srebrenica.org for materials and support.