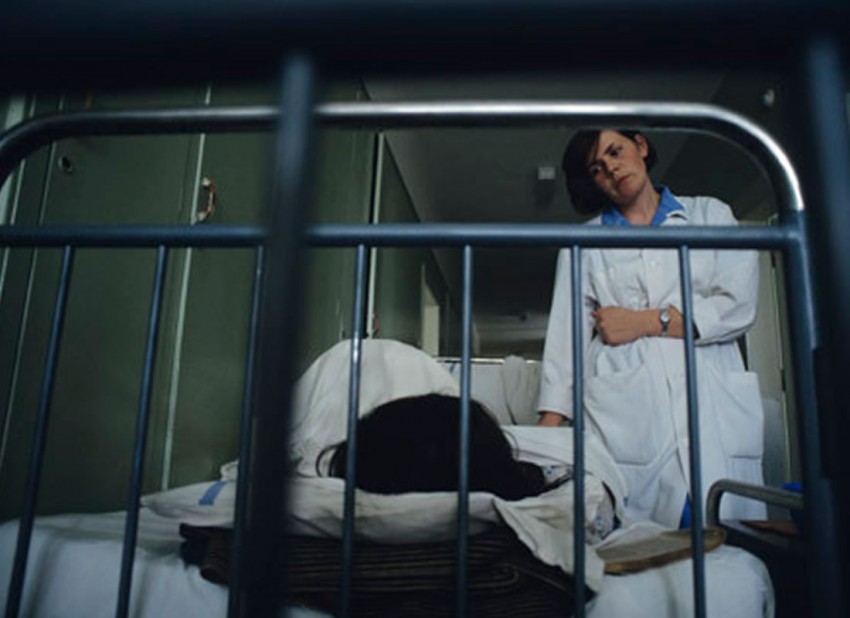 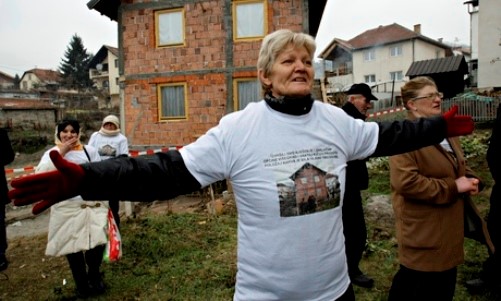 Bakira Hasečić is a hugely respected human rights activist in Bosnia and is President of the Association of Women Victims of War (Udruzenje Žene-Žrtve Rata). She founded the Association after she became a survivor of wartime rape during the devastating campaign of ethnic cleansing that took place in Visegrad from 1992.

Bakira works towards securing the prosecution of war criminals and rapists who are living in the Republika Srpska, and shows enormous courage by working directly in the localities, gathering evidence and information about the perpetrators of crimes against women. Her organisation tirelessly campaigns for survivors of wartime rape sexual violence, and seeks justice in the national and international courts.

As well as providing psychological and financial support to the members, the Association has provided vital witness testimony in national and international trials, helping women to obtain justice for the atrocities committed against them.

Download this excellent BBC podcast to learn more about the incredible work and bravery of Bakira and the Association of Women Victims of War. 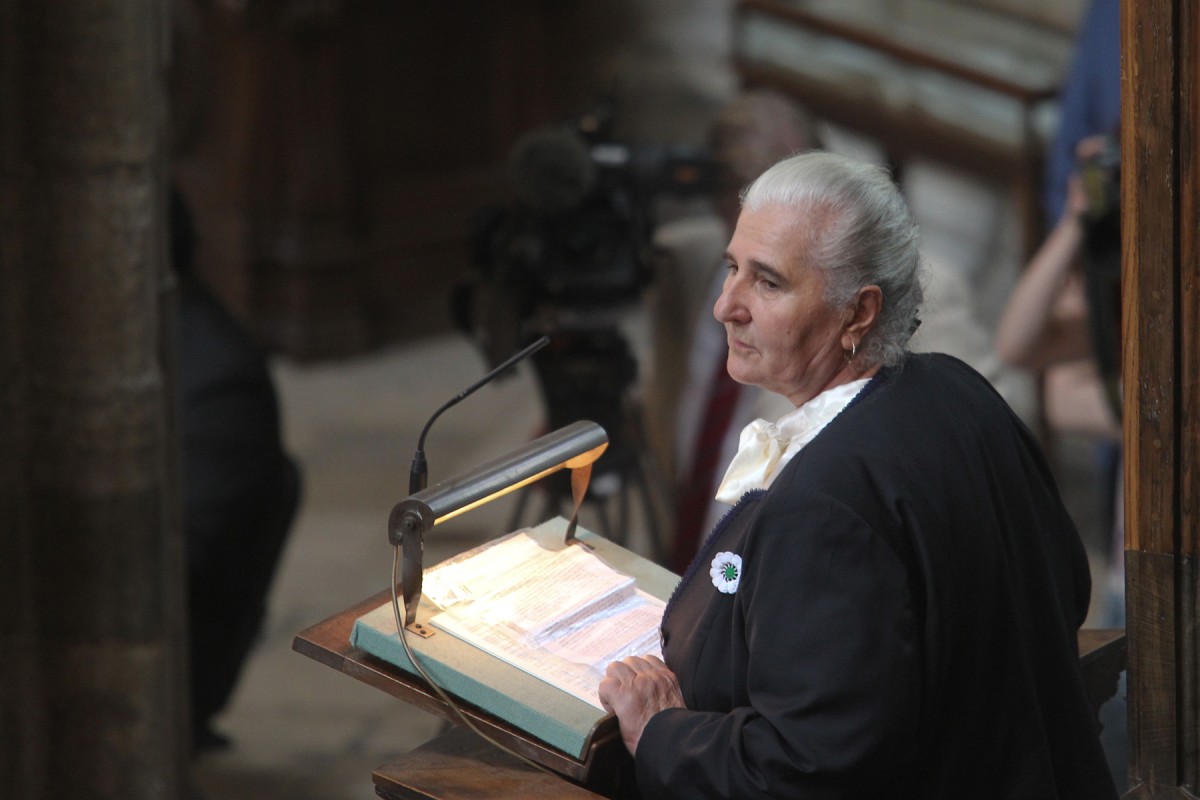 Munira Subašić is the President of the Mothers of Srebrenica and Žepa Enclaves Association, and through her determination and unrelenting courage, Munira and the Mothers have been nationally and internationally recognised for their activism.

The Mothers Association were the first ones to collect and document the names of those who were killed and they provided this information to The Hague. Munira led this work because she understood that mothers would never forget, and they all needed to ensure their children’s lives were acknowledged and recorded. They have faced much resistance over the years and have had to resort to direct action, such as going out on the streets and stopping traffic to get themselves heard.

Whilst the main architects of the genocide have been indicted at The Hague, there is much work still to be done in bringing those who committed war crimes to justice. Munira continues her fight for the rights of the women of Bosnia in order to bring those responsible for the atrocities in Srebrenica to justice. Read her full story here. 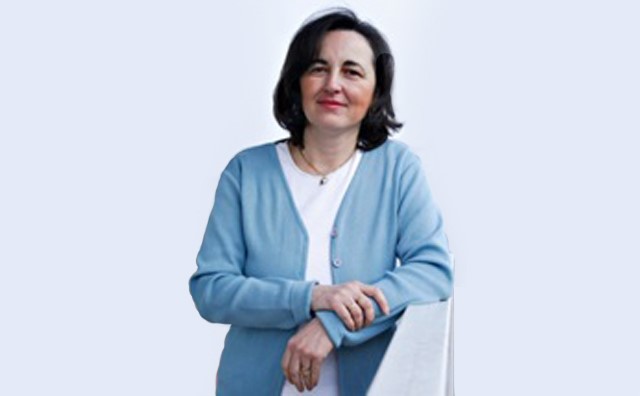 Dr Branka Antić-Štauber is the inspirational founder of “Snaga Žene” (“Power of Women”), an NGO based in Tuzla that is dedicated to addressing women’s health holistically. Dr Branka’s long-term work with victims of war is exceptional, and she is widely respected as an authority on the impact of violence on women and children.

As well as working with traumatised women directly, Dr Branka also considers the long-term impact of trauma, looking at the trans-generational transmission of trauma, and carries out therapeutic and educational work with the children of traumatised women. Snaga Žene also carries out the vital work of supporting refugees who wish to return to Srebrenica, along with working in the refugee camps in Tuzla.

Through the NGO, victims of war are helped with preparation for hearings, and are accompanied to court proceedings. Read more about her work in an interview about trans-generational trauma here or visit the Snaga Žene website (in Bosnian). 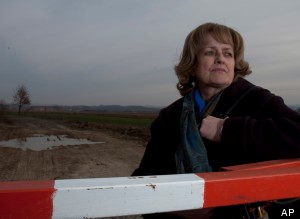 Nusreta Sivać was a respected and well-known member of her community even before the war broke out, working as a judge in Prijedor. After surviving Omarska concentration camp, she was key in gathering testimonies from hundreds of rape victims, and has shown immeasurable courage in personally testifying at the ICTY against the man who repeatedly raped her when she was a detainee.

Whilst detained, she told herself that she would memorise the names and the faces of those who carried out abuse and torture so that she could later ensure they would be brought to justice. She joined and worked with the Women’s Association of Bosnia Herzegovina, and helped to prepare the first indictment of the ICTY.

The enormous accumulation of evidence of wartime rape by Nusreta resulted in a turning point for the United Nations recognising it as a war crime. In 1996, on the basis of the testimonies Nusreta collected, the Hague indicted eight Bosnian Serb men for sexual assault in eastern Bosnia.It was the first time in history that an international tribunal charged someone solely for crimes of sexual violence. Read more on her story here. 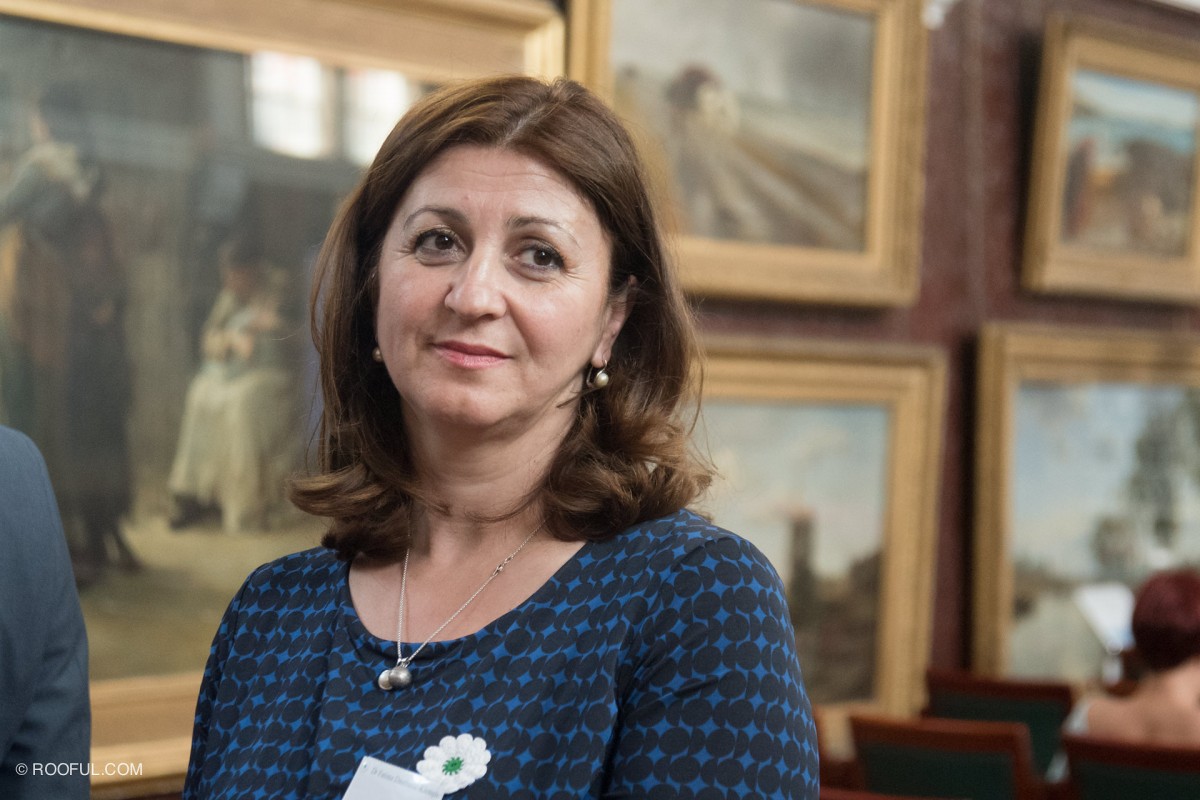 Dr Fatima Dautbasic-Klempić was one of five doctors in Srebrenica at the time of the siege and one of the few women who joined the men on what became known as the ‘Death March’; the column of 15,000 people who fled Srebrenica on foot, undertaking a 70 mile journey when Bosnian Serb forces took the town on 11th July 1995 in order to reach free territory.

She was one of just five doctors in the town during the war. Working in the most desperate circumstances, often with no electricity, anaesthetic or other forms of modern medicine, Dr Fatima treated the sick and injured throughout the years of war. She particularly tried to help the women of the town and the thousands of refugees who arrived in Srebrenica seeking safety.

Dr Fatima is a gynaecologist and lives and works in Tuzla (the town to which she fled 21 years ago). However, she goes back to her hometown in Srebrenica every month to offer medical support and examinations for expectant mothers and other women in need. Watch her tell her full story here. 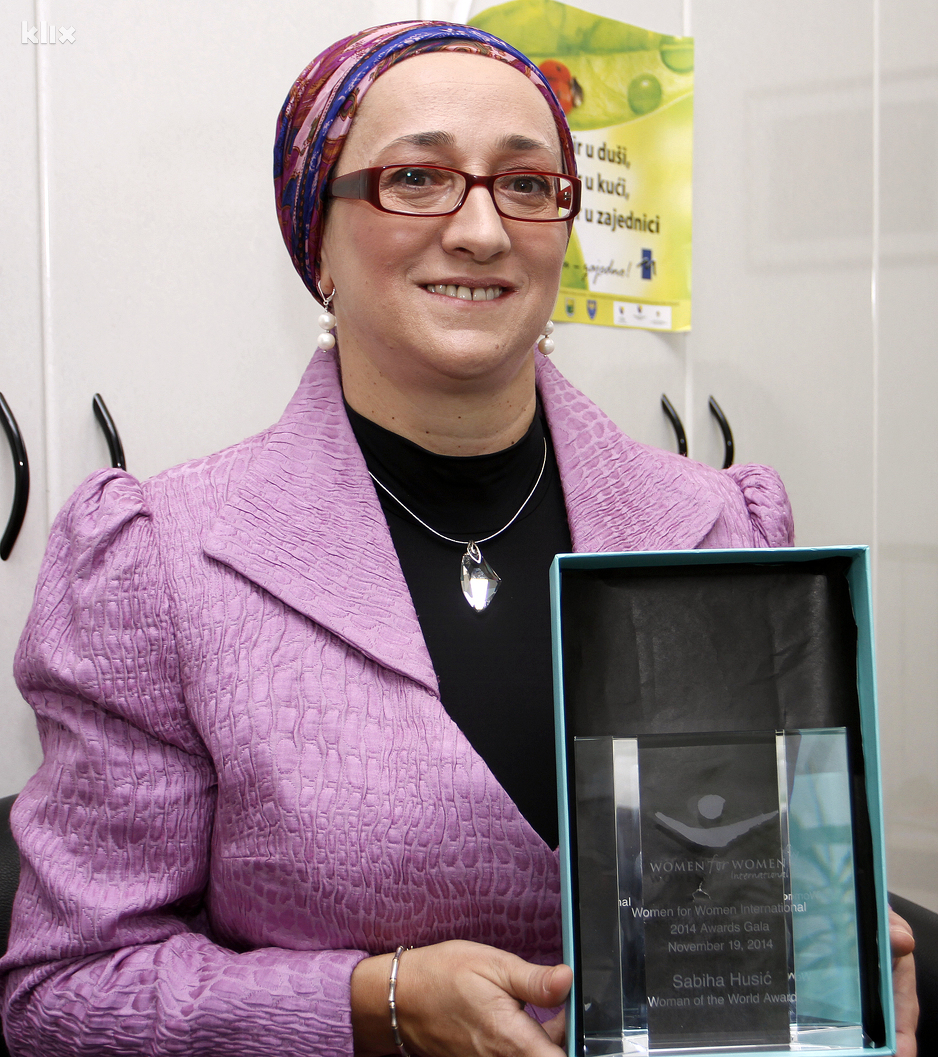 Sabiha Husić has devoted her life to helping survivors of rape and other violence against women. In November 2014, she was awarded the “Woman of the World” award by Women for Women International.

She is an Islamic theologian, a psychotherapist, and Director of Medica Zenica, the first centre to provide therapy and aid to women who were raped and traumatized in Bosnia. She first got involved with the organisation at a refugee camp in Zenica after travelling 15 days on foot to escape from the war in her home town in central Bosnia. She has counselled thousands of rape survivors, advocated for just and equal rights for all women, as well as providing more than 400,000 services to women and children suffering from violence.

She shares a message from the women she tries to heal: “You did not break me as a woman. I have been harmed but I am brave and strong. And I am still alive.”

Watch this incredible video about the work of Medica Zenica. 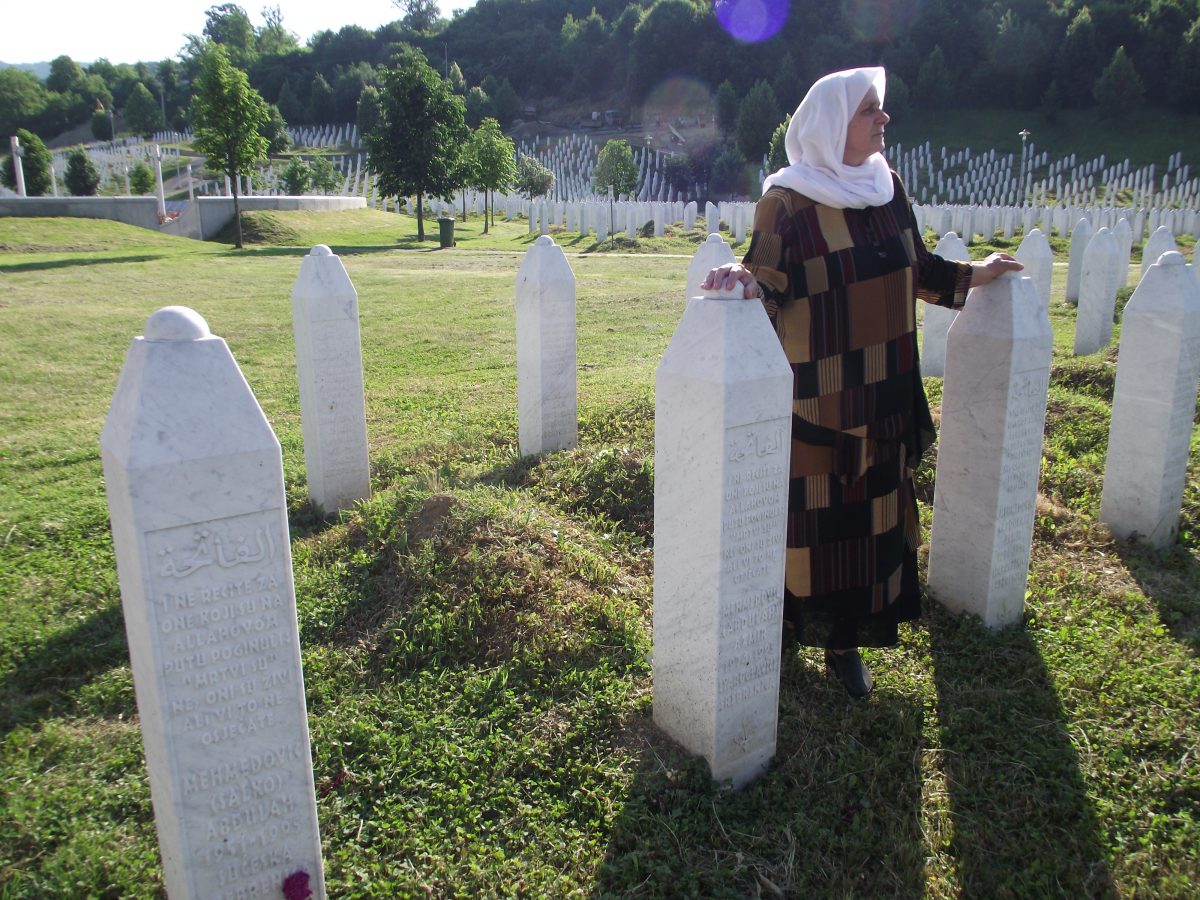 Hatidža Mehmedović, who lost her husband and two sons in the genocide, has been a key public figure in the Mothers of Srebrenica Association and is a returnee to the town. She and other Mothers of Srebrenica work to establish the truth concerning the fate of the victims, and try to help the returnees to have a better life.

While she encourages the reconciliation and cohabitation of Bosniaks and Serbs, she does so in the recognition that this can only happen once the war criminals have been arrested and put on trial.

Hatidža is very well known in Bosnia-Herzegovina, and her painful testimony continues to be published and shared in dozens of films, documentaries and papers. For many years she has bravely resisted the authorities in Republika Srpska in her attempts to lay flowers at the sites where mass executions took place. Watch our video featuring Hatidža’s testimony here. 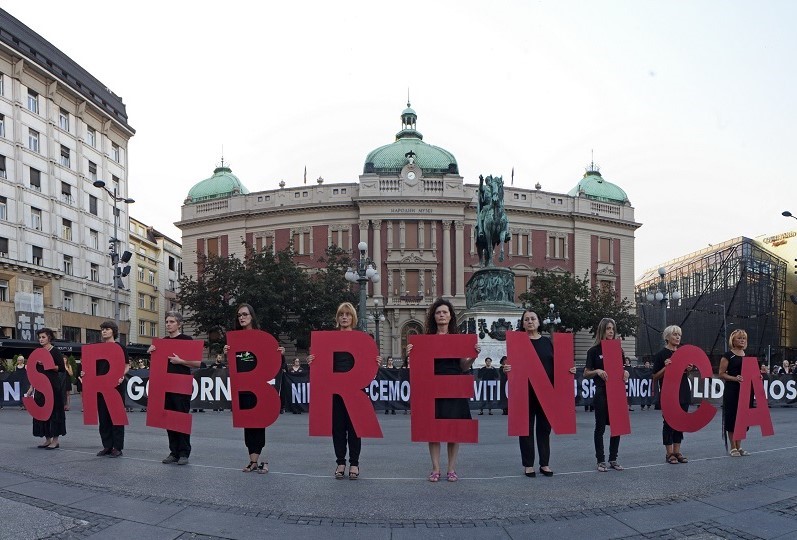 Women in Black in Belgrade is a branch of a women’s transnational peace group and has been working for 25 years, staging peaceful demonstrations against militarism and standing up against threats of violence from Serbian nationalists. They have faced almost every kind of intimidation and threat, including police interrogations, hate speech, unlawful detention, arrest warrants, confiscations of passports, administrative problems and death threats.

The courageous activists mark all atrocities of war both in the Balkans and further abroad, and Women in Black have consistently marked the Srebrenica genocide in Belgrade. They wear black because it’s a symbol of death and grief, and the vigils are always silent, out of respect, but also as a way of making the point that there are simply no words to describe the terrible pain and inhumanity that war brings.

Watch how they created the highly moving public commemoration for the 20th anniversary here.