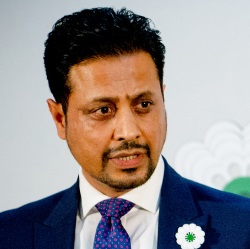 Dr Waqar Azmi OBE says that the Early Warning Project provides an important means of raising public  awareness that mass atrocities – like the genocide in Srebrenica 20 years ago when more than 8,000 Bosnian Muslim men and boys were systematically murdered – can still happen.

The Early Warning Project has been developed by the United States Holocaust Memorial Trust Museum as a tool to alert policy makers and public to places where the risk of mass violence is greatest. It then allows people around the world to call for action before it’s too late.

Designed by the Museum and Dartmouth College, the system measures, tracks, and analyses known risk factors that could lead to a future instance of mass atrocities. Combined with real-time analysis from regional and genocide experts, this data generates a forecast that allows resources and attention to be focussed on countries most at risk.
Dr Azmi said:

The Early Warning Project could prove an important step forward in ensuring that people across the world understand that the spectre of atrocities, such as Srebrenica, still haunts us in the 21st century.

“Srebrenica was the single greatest atrocity in Europe since the Second World War, yet the early warning signs of mass violence went unheeded. This tool should help governments and the international community take timely action to reduce the likelihood of lives being lost.”

Remembering Srebrenica raises awareness of the genocide in the UK. It works with people across the country to help strengthen British society by learning the lessons of history. It organises UK memorial community action events and takes individuals from communities across the UK to Srebrenica to speak to survivors and families whose loved ones were killed.

Following their experience, visitors pledge to take action in their communities with projects to help raise awareness in the UK of the genocide and its consequences, whilst helping to strengthen British society against the threats posed by hatred and intolerance.