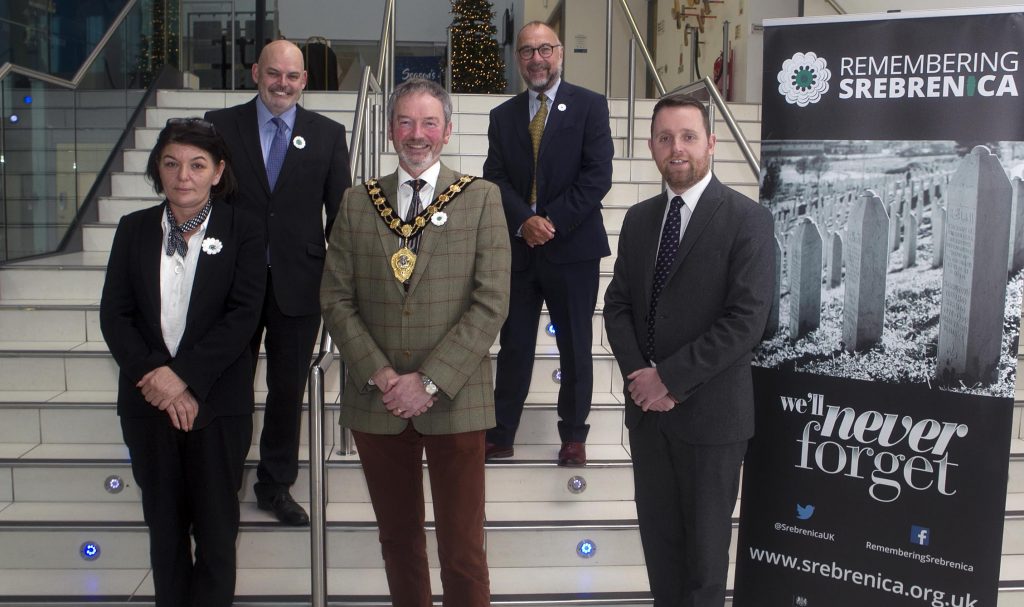 A survivor of the Bosnian War has been sharing her story to inspire the next generation of leaders in Mid and East Antrim as the pioneering PEACE IV Programme comes to an end.

Speaking at an event at The Braid in Ballymena and a local school, Elvira Mujkanovic encouraged young people to turn away from prejudice and embrace tolerance, inclusion and diversity.

The pioneering Conflict Transformation and Srebrenica Programme was launched in July 2019, as part of the PEACE IV Programme, funded by the Special EU Programmes Body. It has taken a group of young people from across the borough on a journey to explore past conflicts to promote a peaceful future.

The programme was the first of its kind in Northern Ireland, and Mid and East Antrim Borough Council were the first local authority to support such a project.

The Mayor of Mid and East Antrim, Councillor William McCaughey said: “I am proud that three years ago we were the first local authority in Northern Ireland to support this life changing youth programme. It’s important to not only reflect on the worst atrocity on European soil since the Second World War, but use it to inspire future generations that peace after conflict is possible.

“In Northern Ireland, we know what happens when prejudice and hatred is left unchecked. We must always be ready to challenge and confront racism and sectarianism at all times. That is why this programme is so important, encouraging new leaders to challenge old hatreds and to learn from elsewhere.

“I wish to express my thanks to Remembering Srebrenica and the teams in Northern Ireland and Birmingham for the dedication and hard work which has made the Conflict Transformation & Srebrenica Programme the success that it is. What a way to wrap up an amazing PEACE IV programme.”

Elvira Mujkanovic said: “I feel Bosnia and Northern Ireland have so much in common. Beautiful countryside and the friendliest people, but they have also experienced tragedy driven by identity and religious hatreds. Both are still feeling their ways out of traumatic conflicts that ended in the 1990s, trying to build a sustainable peace.

“Yet, as I know too well from my own experience, peace can quickly evaporate if hatreds are left unaddressed. I am delighted to help close this programme, and give these young leaders a reminder that whatever happened in the past, the future – their future and ours – is in their hands to support a peace built on tolerance and respect; a peace that doesn’t just support diversity but embraces and protects diversity as a cornerstone of the future.”

Junior Minister Gary Middleton attended the event at The Braid, he said: “The Executive Office is very proud to have supported this remarkable PEACE IV funded Conflict Transformation and Srebrenica Programme. I commend all those involved in delivering and participating in the Programme. It has broadened the horizons of our young leaders, while providing an international perspective on conflict resolution.

“It’s vitally important that the terrible events in Srebrenica, and other genocides, are remembered and never repeated. Projects such as this support our work to promote a culture based on respect and inclusion and help eradicate intolerance and prejudice.”

Junior Minister Declan Kearney said: “The Executive Office has long supported Remembering Srebrenica, and I am delighted that through the Conflict Transformation & Srebrenica Programme they are helping to tackle intolerance and division in our society by developing a new generation of young leaders who will contribute to that vital work.

“I would like to congratulate Mid and East Antrim Borough Council and Remembering Srebrenica on the successful delivery of this transformative programme. Such initiatives make an important contribution to our goal of making this a more united, inclusive and equal place for everyone.”

Peter Osborne, Chair of Remembering Srebrenica Northern Ireland added: “The message is clear – relationship dismantles prejudice and the Mayor’s and Elvira’s words will inspire a new generation of leaders in Mid East Antrim.

“We have a duty in our own lives, in our own way and in our own region to combat hatred and prejudice so that any violence driven by ignorance and prejudice, whether or not as significant as the Srebrenica genocide, will never happen again. We are indebted to everyone who supported and participated in this programme.”