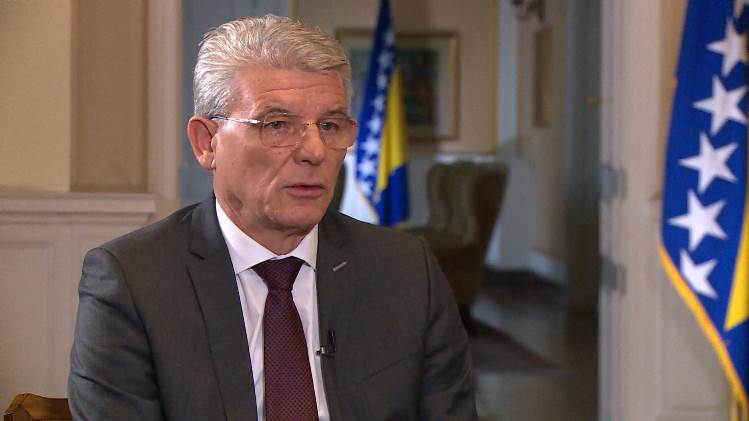 I would like to greet you and  express my sincere gratitude for your participation in this virtual commemoration.

This commemoration provides us with the opportunity to together pay tribute to those who were brutally killed, as well as to those who have survived and endured the horrors that no one should have to go through. This moment strongly reminds us that we must reaffirm our determination and ensure that the hatred and prejudice that led to the genocide and ethnic cleansing in Bosnia does not spread in our own communities.

I am grateful that in the past seven years, the United Kingdom has organised the largest number of commemorative community action events outside of Bosnia and Herzegovina to mark the anniversary of the Srebrenica genocide. The clear and unequivocal position of the British government that genocide must never be forgotten, and that the world should be vigilant and prevent similar tragedies in the future, is truly valuable for the state of Bosnia and Herzegovina.

We greatly appreciate the support of the United Kingdom, whose government has significantly contributed to the construction of the Potocari Memorial Centre, the work of the International Commission on Missing Persons, and the assistance to the returnees in Srebrenica through the reconstruction and construction of infrastructure, as well as the establishment of the “Remembering Srebrenica” charity organisation. I support the charity’s plan for the establishment of the first National Memorial and Learning Centre in the United Kingdom and invite you to support their fundraising activities.

I strongly support the work of “Remembering Srebrenica” in the United Kingdom. The fact that over the last seven years the organisation has introduced 100,000 young people in the UK to the lessons from Srebrenica, organised 1,200 memorial community action events and activities a year in various cities and towns across the UK and has 1,450 active Community Champions working on anti-hate and intolerance in their local communities shows the enormous impact that “Remembering Srebrenica UK” has.

It is an honour to share this platform with survivors. I pay tribute to their immense courage and resilience to unspeakable sorrow and pain. One can not even imagine how hard it is for them to recount their story. I thank them for sharing their sincere testimony. We can all see the strength and wisdom from the testimonies of survivors that help us participate in building stronger and more cohesive societies.

It’s commemorations like this one that forms an integral part of the memory process. After the Holocaust, we said “never again.” However, only fifty years later, genocide was committed again on European soil. This is why memory is so important. If we want to prevent such atrocities in the future, we must ensure that Srebrenica is never forgotten.

Today, we pay tribute to the victims of the Srebrenica genocide and reaffirm our commitment to never forget what Judge Fouad Riad at the International Criminal Court described as “true scenes from hell, written on the darkest pages of human history.” My message is clear: remembering and conveying the truth about the tragic events of the late 20th century is a prerequisite for preventing hatred and building safer, stronger and more cohesive communities. Lies, self-deception and ignorance are potential sources of renewed violence and conflict – everyone is responsible for facing the mistakes of the past in order to build a better future.