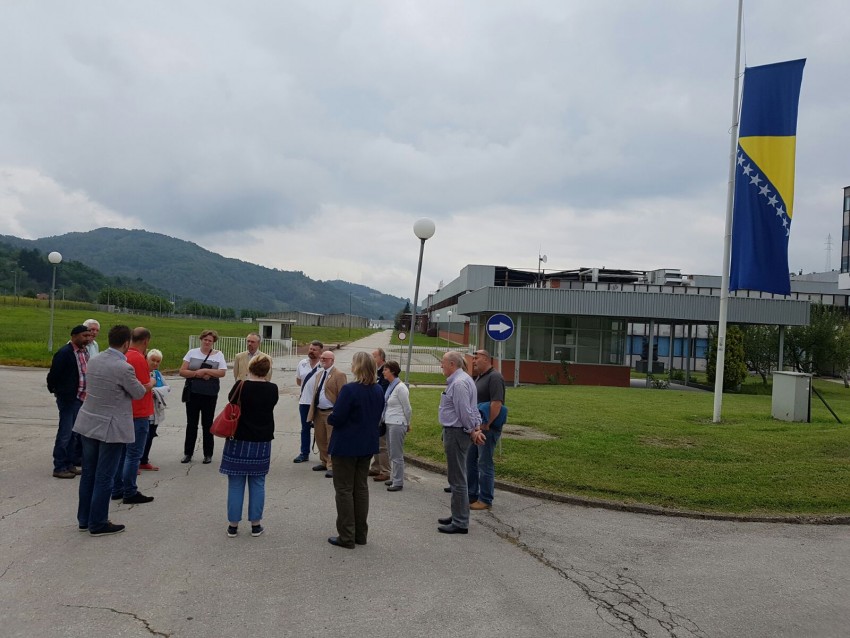 In July 1996 I was contacted by a leading pathologist, with whom I had often worked, on behalf of the UK Foreign & Commonwealth Office [FCO] to ascertain if the Metropolitan Police Service [MPS] would consider despatching a Homicide Advisor to assist with exhumations and autopsies being conducted in Bosnia on victims of the war in Yugoslavia. ICTY sought expert aid in evidence retrieval procedures which would be acceptable in European courts in future prosecutions against war criminals.

I was soon flown to Zagreb from where we were convoyed to a town called Tuzla in Bosnia in white UN mini buses, accompanied by a number of lightly armed US military vehicles as escort. Upon leaving beautiful Croatia via a military pontoon ferry pushed incredibly by a very old tug across the Sava river, as the bridge had been destroyed during the fighting, the horror of the conflict began to show in the drabness of the region on the Bosnia side of the river. 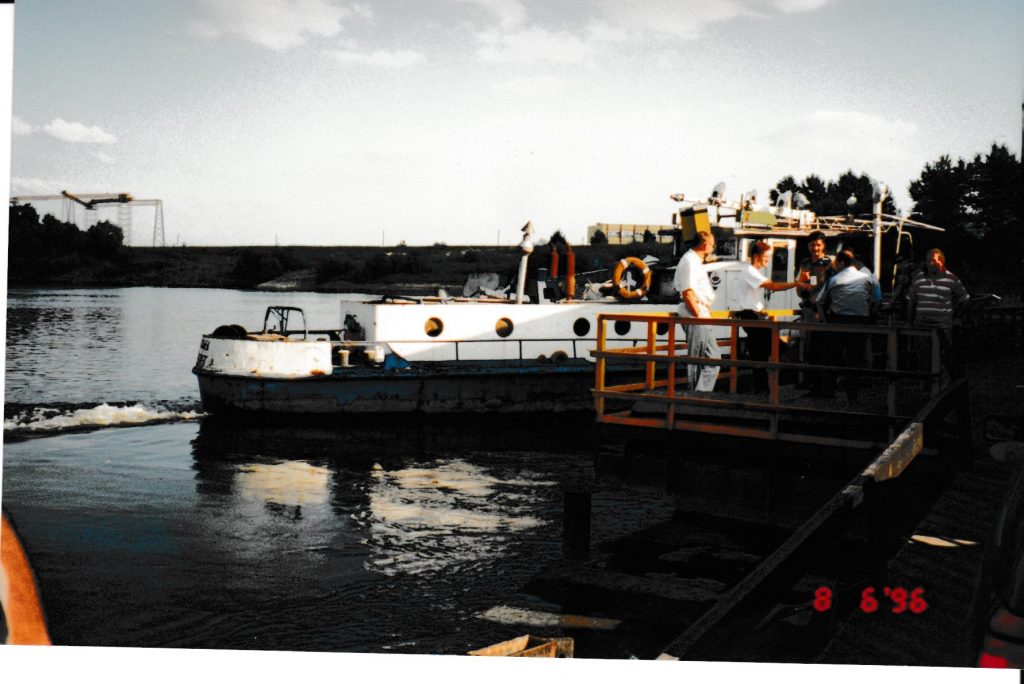 The destruction and desolation that we saw and the gaunt, almost distant look on the faces of people we passed on the troublesome roads, pot-holed by artillery fire was alarming.  There were no animals to be seen in the lush green fields, which struck me as odd. This was a slow, nightmarish journey through many military check-points manned by young, bored looking soldiers in heavily armed and sand-bagged positions, some with battle tanks dug in around them. Helicopter gunships were seen and heard clattering around in the skies above.

The safe houses we were housed in when we reached Tuzla were large and multi roomed but none had running water during daylight so we set up a roster to ensure that a designated team member would arise at 0300hrs and fill the bath and all available receptacles with water which ran between then and 0500hrs most nights.  Even flushing the toilets was restricted.

After a short local security briefing we learned that we were resident and would operate in an American zone of protection. We got accustomed to seeing GI’s everywhere but for me, as the only Brit, this was an alien environment.  Snipers were not entirely ruled out we were told, but the main problems were land mines and unexploded ordnance.

To walk outside of marked areas was out of the question. We were advised not to go anywhere alone, especially our female colleagues, and to wear UN caps / berets where possible in potentially ‘hostile areas’.

We were informed of mass graves identified by survivor and witness testimony, which had been under military guard and were to be excavated for the International Criminal Tribunal for the former Yugoslavia (ICTY). Allegedly toward the end of hostilities Bosnian Muslim men had been ‘bussed’ here from detention camps then shot and buried in mass graves.

I travelled to a site near the village of Cerska in the Srebrenica region which had been the centre of extremely hostile fighting. We passed through small homesteads that had been systematically reduced to mere rubble. Shockingly obvious, however, and a vivid reminder of the ethnic cleansing which had occurred here, was the existence of recognisable national Serbian signs daubed in paint on some houses that stood relatively undamaged.
An initial perimeter search of the surface of this grave revealed clusters of 7.62mm cartridges, of the type used in Kalishnikov weapons, indicating lines of fire.  Bullet scorings were detected on trees opposite. First soil removals exposed boxes of shoes then further excavation revealed skeletal remains. We’d been informed that all of the victims would be male. 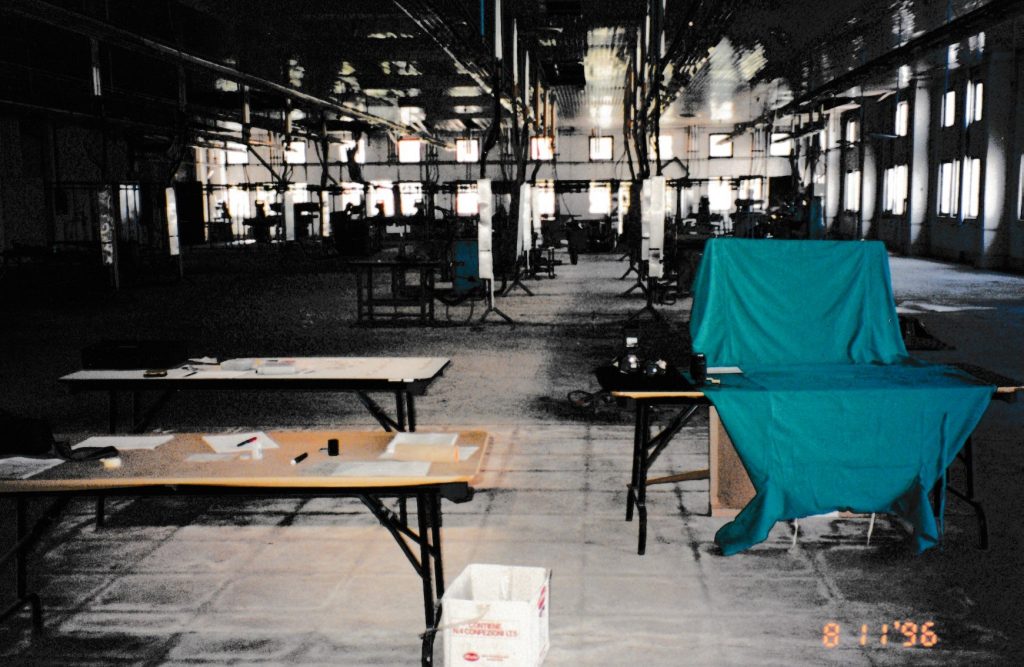 Full mapping, sketching, video and photographic recording was undertaken and attempts to differentiate the bodies began.  This is extremely physical and emotionally exhausting work.  As the site progressed it was evident that layers of bodies were contained to a depth of several metres.  Most were co-mingled, bore signs of trauma, and firearm entry / exit wounds were commonplace.

Disturbingly most occupants were blindfolded or gagged and had their wrists, and sometimes ankles, crudely bound with wire, barbed wire sometimes. 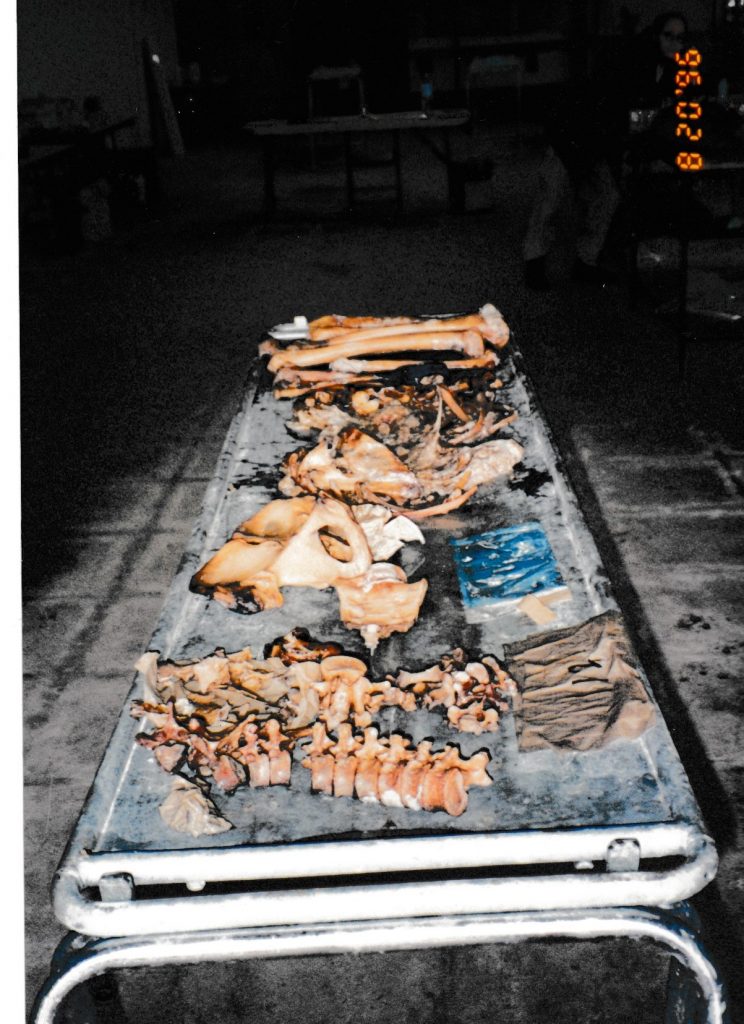 We found individuals dressed in home-made garments created out of military parachute material, some with curtain material as patches. One tragic individual had silver electrical duct tape wrapped around his stockinged feet in the absence of any more robust footwear.  We were aware that some of these unfortunate individuals had been held in concentration camps for years and had to make do with whatever clothing material they could find in order to survive the severity of the Balkan winter.

As much detail as possible was gleaned from each cadaver, photographed and compiled into a directory [album] beside a physical description of the body.  This was shown to relatives in hope of identification and I’m glad to say was successful in a number of cases.

I recall finding a photograph in the wallet of a victim which showed a young woman and two little girls, all in traditional costume, smiling towards the camera in a sunny garden.  It was wrapped inside a child’s crayoned drawing of a house and family.  Two bullet holes had ripped through it.  As I teased the photo out on a drying board using water, a scalpel and tweezers I became aware of a couple of female members of the team looking over my shoulder with tears in their eyes.  I think the final insult of this cherished possession going to the grave with the father or loved one of these little girls and their mother, being destroyed thus preventing identification by the murderer’s bullet hit us all.

Smoking utensils were found on nearly every body. Some were inscribed with names which was of interest and useful to us. Small waxed bags of dried fruit and sugar were commonplace, occasionally wrapped in embroidered handkerchiefs bearing female names. A few promissory notes written by community leaders were found guaranteeing money for the safe passage of the bearer or good treatment whilst in detention. We later learned from the writers of such notes that they had been told by the captors of these men when being taken to work camps: “To aid in rebuilding the country at the cessation of hostilities”. 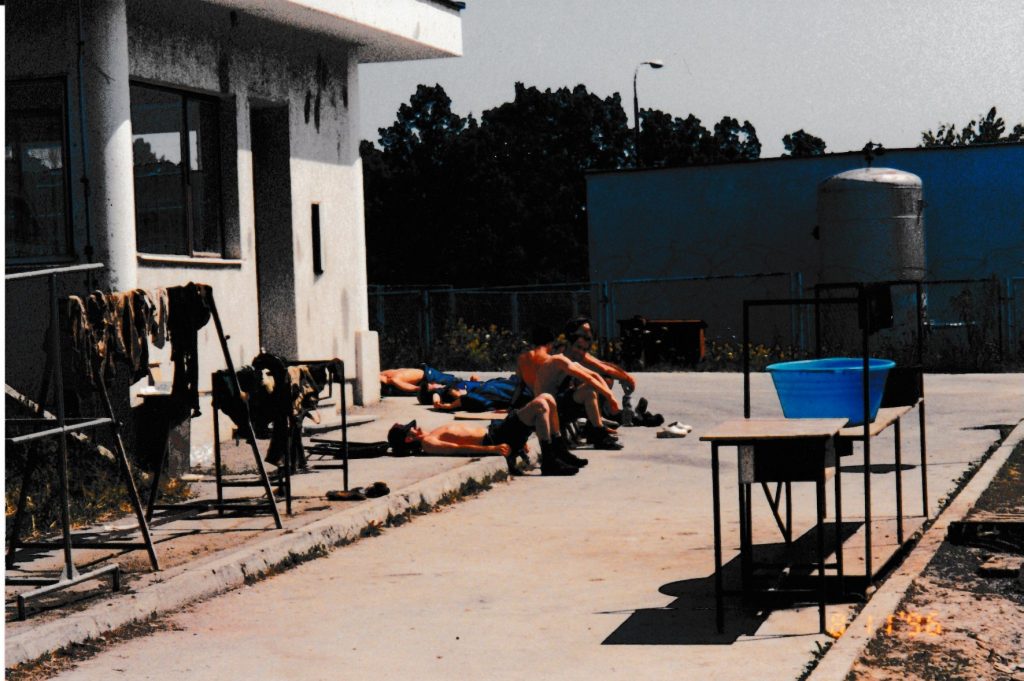 During our spell in Kalesija many of the women bussed to Tuzla from the Srebrenica region became aware of our work. I recall a letter being read out by one such lady from a grieving relative which said: “May I be given a small bone from my son so that I may carry it and sleep on it until I get his body back”. Alas this could not be permitted but it demonstrated to us the intensity of the women’s grief and instilled in us even more deliberation to find evidence against the cruel perpetrators of these atrocities.

Our next site was near Vukovar Hospital, again in the Srebrenica region.  Intelligence claimed that patients, doctors, nurses, Red Crescent workers and hospital staff had been taken away, killed and buried in a mass grave.  Of the 300 men known to be alive at the end of hostilities being treated in this hospital, 261 were missing, believed dead. This figure does not include medical personnel. This atrocity was carried out after UN observers visited the hospital but before armed peacekeepers could liberate and protect it. The hospital was under the command of JNA [Yugoslav Army] and Serbian paramilitary troops.  The site was similar to the Cerska site and dealt with in the same way. However, in this site female bodies were discovered.

A familiar pattern in such cleansing atrocities is the targeting of professionals, academics and intelligentsia. There’s indisputable proof in the former Yugoslavia that the medical profession was singled out for special treatment.  Doctors and nurses who tended prisoners of war were also killed when the UN forces started to enforce the ceasefire and endeavour to regain control. Several hundred medics were missing from this hospital, presumed dead.

These poor people must not be forgotten, they were not soldiers killed in combat. They must not be allowed to have died in vain, especially when evidence of their abhorrent and shameful demise is capable of proof and those responsible can and should be brought to justice. Only then can the former Yugoslavia work towards its own future.

When I returned to ICTY in The Hague I helped set up protocols for various sites in the Balkans.  I was so appalled and moved by what I had witnessed in Bosnia that I felt compelled to channel my efforts and lend my expertise to assist with war crime investigations in this region where possible. With the support of senior MPS officers and the FCO I was able to do so, returning on several occasions in 1997/8 to Bosnia, Kosovo and Republic of Sprska with ICTY investigation teams to examine other sites and arrest perpetrators of war crimes.

Having been actively involved in war crimes investigations in the Balkans since 1996, seconded as described to the UN via the FCO, I took up a post as Head of the Evidence Unit, ICTY in The Hague in 2002. This unit not only dealt with evidence in the Milosevic trial but all of the other alleged war criminals indicted from the former Yugoslavia to face war crime charges relating to ethnic cleansing and other human rights atrocities, especially General Ratko Mladic and Radovan Karadzic.

Tantamount in my thoughts throughout this arduous, harrowing, and oft times gruesome work was a quote I made to a reporter early in my involvement: “The people in these graves were not allowed a voice. It is our task to give them back that voice”.  Hopefully, we did so. 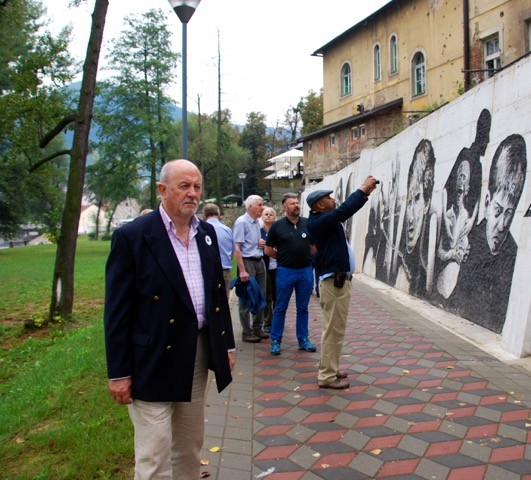 In September 2016 I was a proud member of a delegation invited back to Bosnia on behalf of the charity ‘Remembering Srebrenica’ and was amazed at the advances of scientific DNA identification spearheaded by ICMP and also the rejuvenation of the region, plus the hopes and aspirations of many Bosniaks we spoke with. Obviously a lot has still to be accomplished and the recent past will never be forgotten but with hard work, patience and good will a great deal could be achieved.

Especially memorable was a courageous address by one of Mothers of Srebrenica who spoke of the loss of her husband and son then and how it affected her and her daughter. The determination she displayed to keep living for her grandchildren, setting up a small business selling books, flowers and mementos outside the Dutch Bat base, where this all began, was humbling and her resilience and fortitude impressive.

Visits to the Dutch Battalion base, Tunnel Museum and Galerija 11/07/95 were outstanding. I noted the serenity and silence of my colleagues as we spent time in these venues, reminding us of our work in 1996. I think we did make a difference. 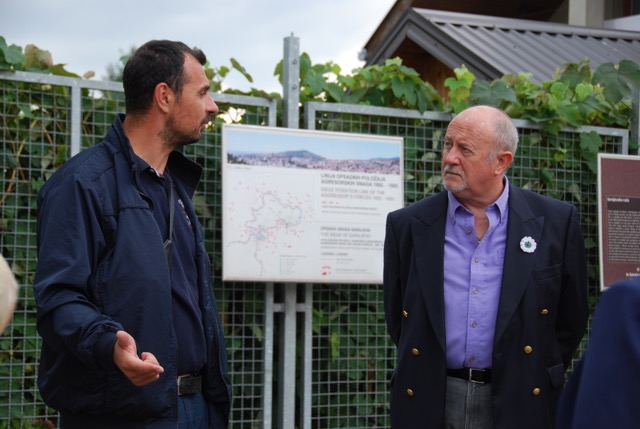 I would like for the record to praise Resad Trobonja who was not only a superb guide but a knowledgeable patriot who answered any questions we had and ‘told it like it was’ during the siege of Sarajevo. It was a pleasure meeting him.

Since that trip I’ve passed on details of the work of Remembering Sreberenica via Facebook and an association of ex-Scotland Yard detectives I belong to with the hope of interesting others in the fine work of this charity.