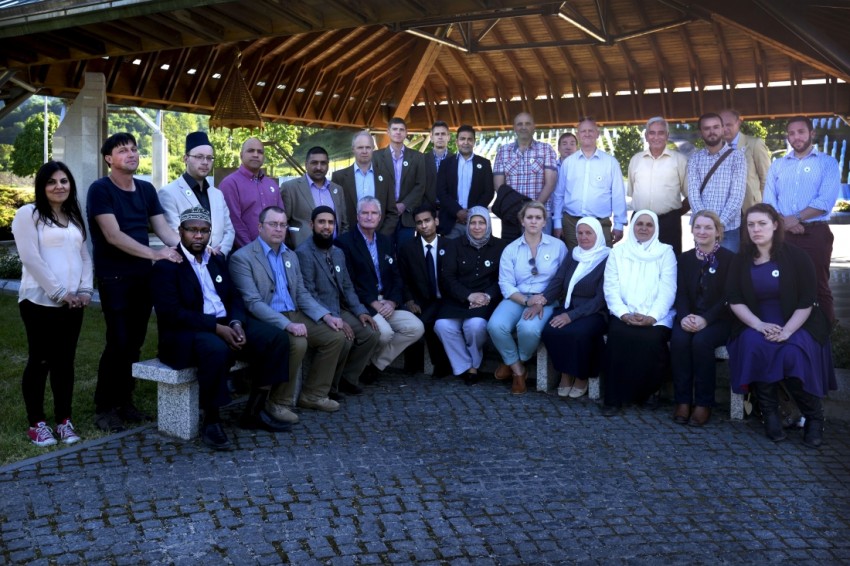 During 19 years in the active unit the most rewarding experience was an operational tour to Bosnia in 2000 with 1st Regt Royal Horse Artillery at Sanski Most.  This eventually led me to transfer in 2006 to what has become the newly formed 77 Brigade.  Ever since my tour I had followed events in Bosnia with interest and travelled in the country briefly in 2007 and 2008.

Through a chance meeting with Major Martin King HAC I found myself working also for the Civil Engagement Team at HQ Support Command.  Events often unfold in strange ways and no sooner had I got home from Sarajevo in March from EX CIVIL BRIDGE (a Defence Engagement exercise working with emergency planners and responders from the Bosnian Federation and Republika Srpska) than the opportunity arose to return to Sarajevo with the Civil Engagement Team, who as the name suggests lead on the Army’s engagement with the UK civilian population.

This visit was more daunting a prospect as I had been invited with two colleagues by the charity Remembering Srebrenica.  This highly respected organisation, among other things, arranges and leads visits to Bosnia to educate people about the genocide and to raise awareness of the tragic events of 20 years ago.  Its work focuses also on reconciliation and the prevention of genocide.

Our group of 23 (pictured at the Srebrenica-Potočari Memorial Centre) included Imam Asim Hafiz OBE who is Islamic Religious Advisor to the Chief of the Defence Staff and the Service Chiefs and Brigadier William O’Leary who was representing Commander Land Forces.  On the evening of our first day in Sarajevo we attended a most enjoyable reception held by His Excellency Edward Ferguson the British Ambassador, who kindly gave us a highly informative briefing about Bosnia today, together with Lt Col Marshall the British Defence Attaché.

Our delegation was hosted by Resad Trbonja, a Bosnian Army veteran who was a defender of Sarajevo throughout the siege.  During a visit to the famous War Tunnel which was a vital supply line for the city Resad gave an impromptu talk on how life had been at that time, which had us all transfixed.  Resad incredibly has retained a rapid fire sense of humour and regaled us with fascinating tales from the siege including remarkably how he only finally received his first uniform in late 1995.

We also visited the ‘Galerija 11/07/95’ in Sarajevo which showed two moving films about the war and which houses a Srebrenica exhibition that includes a room covered entirely with photographs of Srebrenica victims.

This serves as a poignant reminder of the human cost – with such awful statistics you can lose sight of each personal tragedy.  Here the curator Tarik Samarah spoke with great warmth about how the Galerija exhibition is not about making ‘capital’ in anyway but to honour those killed and to educate and warn the world about the threat of ethnic, or any kind, of hatred and dehumanisation.

Central Sarajevo is beautiful on a clear April day surrounded as it is by snow capped mountains.  Despite what we had seen and heard it was still hard to imagine how tough life must have been in the siege.  We met Ron Haviv at the Galerija; a renowned and unassuming photographer whose graphic images from Manjaca and Trnopolje concentration camps were seen around the world and opened its eyes to the appalling conditions being endured.  In a welcomed lighter moment someone from our group asked if the knitted headwear Mr Haviv was wearing was worn for reasons of faith, to which he wryly replied: ‘no it’s just cold’.

On day three we visited the International Commission on Missing Persons (ICMP) which operates throughout the world and has been leading the near impossible task of identifying the remains of those discovered in mass graves following the genocide.
The victims’ remains are kept here and logged together with photographs of the clothing and personal effects they had with them to try and assist identification.  The forensic scientists remove sections of bone and prepare them for analysis and explained how the best DNA samples come from weight bearing bone which is denser.  For that reason they tend to opt for samples from the legs or feet.

The painstaking work carried out by forensic anthropologists is remarkable as they continue their task of identifying all 8,372 officially recorded victims.  The remains of some 1,800 victims are yet to be identified.  This task is made that much harder due to fact that many mass graves were bulldozed and moved to new sites to make evidence gathering against the perpetrators nigh on impossible, including concealment under bridges to counter aerial survey.  This practice led on occasions to one victim’s partial remains being traced at up to four different locations.  We later visited the ICMP laboratory in Tuzla where the DNA samples are analysed and matched with those donated by relatives seeking to trace loved ones.  99.95% is the ICMP’s `level of DNA match for statistical identification.  The ICMP has so far analysed over 56,000 bone samples from the Balkans conflicts before you consider the work they do elsewhere in the aftermath of other conflicts and natural disasters.

Our itinerary ended with what was both a moving and harrowing experience.  We drove through beautiful countryside and along the banks of the River Drina which forms the border with Serbia.  Our destination was the Potočari Memorial Centre near Srebrenica where many of the victims of the genocide were so badly let down by the international community.  It is a desolate compound; a shoe factory and warehousing site which had been designated a UN Safe Area.  Most buildings remain as they were 20 years ago except for a couple which house memorial exhibitions.  One contains wooden benches and a large screen (the largest domestic flat screen and multiply it by about eight times) where a film of about 20 minutes duration recalls the terrible chain of events and shows footage of the genocide.  By the conclusion I notice that some understandably have found it too distressing to watch and many are in tears.  The tragic events shown took place 20 years ago yet the natural feeling remains one of outrage and my own reaction at the end is a strong desire for some space to be on my own but I do not get the chance.

We walked immediately in silence to the nearby Potočari Cemetery and Memorial where we were introduced to two of the Mothers of Srebrenica.  One of them, a senior figure, firmly admonished our local guide for being late and keeping them waiting.  Through our interpreter she explained her story and in particular the terrible impact of losing her husband, sons, and other close family members to the genocide.  She was unsparing in her criticism of the UN and international community over what happened and also that more has not been done to bring more of the Bosnian Serb perpetrators to justice.  The second lady spoke every bit as movingly.  When she had finished speaking Brigadier O’Leary, like everyone visibly moved, spoke on behalf of us all with a brief but perfectly pitched speech; unrehearsed and comforting to these women who endure such a burden.  He chose the perfect set of words for such a sombre occasion before short prayers were offered from our Padre and Imam followed by personal reflection as we walked in brilliant sunshine around the site with its vast marble memorial bearing the victims’ names.  Generations of the same family gone; the rows and rows of names seem endless.

It was a privilege also to meet Hasan Hasanović, the centre’s curator who himself survived the 70 mile march that eventually took him to safety, unlike so many others who set off with him, including his twin brother.  Everyone in our group felt profoundly sad as we left Potočari and I found myself trying to recall what I was doing in July 1995 and how news reports relayed events that month.  For my part this year on 6th July I will attend a Srebrenica Service of Commemoration at Westminster Abbey and will be re-acquainted with some of the incredible people I met whose strength and forbearance go beyond any words I can find to adequately describe.  My thoughts will also turn to the dignity and courage of one young man in particular from the footage shown to us as he faced his last moments…..his name unknown to me and just one of 8,372 engraved on the Potocari memorial.

A sombre article for which I make no apology as this event was as low as human nature can get.  People are correct when they say that terrible acts were carried out in Bosnia by all sides but nothing matches the scale and brutality of Srebrenica.  My visit with Remembering Srebrenica will indeed never fade from my memory.  I am grateful to the organisers and also to the kind and thoughtful people I travelled with.  We shared moments of sadness, and laughter too out of sheer necessity, together with some substantial hotel packed lunches on the road.