Bearing Witness: An unbreakable spirit of strength and survival 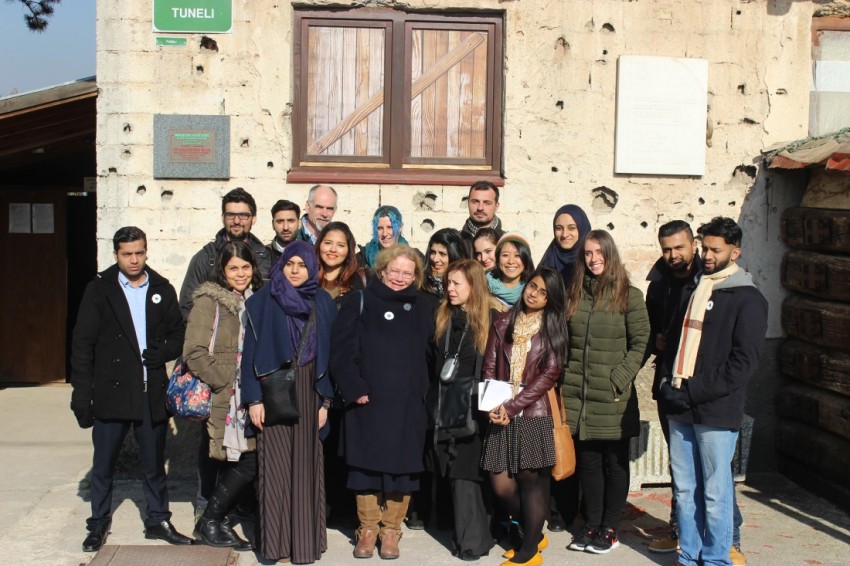 “It is not good enough to live next to each other, we need to live with each other.”

What does it take for us to learn the simple lesson, love thy neighbour?  Resad, was not just our guide. He became our friend and allowed us to see the war through a survivor’s eyes.  He explained that historically, all ethnic groups lived together in relative harmony. Mixed marriages were the norm. A shift in politics, led to the rise of rampant Serbian nationalism. Despite decades of peaceful co-existence, friends turned on friends, neighbours turned on neighbours.

He described his life during the siege of Sarajevo, a siege of 47 months against a city, the longest in history. Resad volunteered to be a solider aged 19 to defend his country and people, with no military training or uniform. He took up arms whilst dressed in his Levi jeans and converses. They were forced to make homemade weapons due to Europe’s embargo on weapons. An embargo which only effected the Bosnian army as the Croats and Serbs were already armed.

Resad explained that in the two days off he would have to recover from the front line, he would provide for his family. The water mains were blocked, but water would find a passage into the city and people would flock to where it collated ‘like a pilgrimage.’ Resad trained himself to carry 60 litres of water a day. He would collect car tyres with his father and burn them for heat. Food supplies only entered Sarajevo through international aid, when it was allowed or had not been shot down in planes from the sky.

There was a huge demand for blood. In exchange for a donation of 300ml he would receive a tin of canned beef. You were only supposed to donate 300ml at a time. Resad would pretend he had not yet donated and give a second donation because “two cans of beef was the perfect gift for my mother.”

Resad told us about the ‘tunnel of hope.’ An underground tunnel to allow the movement of goods, built as part of the resistance movement. It took four months to build. Although it was never going to resolve the issues of the war, the psychological impact was great. The ability to have at least some control, some hope, in besieged Sarajevo.

Resad personified the spirit of the Bosnian people; strength despite great adversity.

The Tragedy of Srebrenica

Despite being declared a ‘safe area’ by the UN Security Council and being under the protection of UN peacekeepers, Srebrenica fell to Serb forces on 11th July 1995. In the next ten days, 8372 Bosnian Muslim men and boys were systematically executed.

The bodies were buried in mass graves which were subsequently dug up and reburied in other locations. This has led to discoveries including bones from the same person being found 30 to 40 km apart or one person effectively having up to five graves.

The International Commission on Missing Persons has led ground breaking work in identifying remains from mass grave sites through DNA analysis. In piecing together the ‘human jigsaw’ it is often impossible to recover the remains of a full human.

One mother described her happiness of finding two shin bones from her son and husband.

“At least they can be buried and there is a place to come and pray.”

“I lost three sons, my husband, and grandchildren. My father was also killed. I live totally alone. It is not easy to live in Srebrenica. I came back here because my children made their first steps here. There have been threats from my neighbours since I have returned. But what can a mother be afraid of when she has lost three sons? Nothing.”

A resounding message from everyone we spoke with was that they did not seek revenge.

“If I could kill all the Serbs in the world, I wouldn’t. I can live freely knowing my children were innocent and I do not have blood on my hands.”

It is difficult to understand how despite such grave injustice, they are able to forgive, forgo revenge and in doing so demonstrate a ‘divine strength.’  What is sought is accountability and truth:

“Courts are for the living. The process can provide a warning for future generations. So they do not follow in the path of those who committed genocide. But there is only one court that will judge all of us when we die.”

The request from us was to unite and take action:

“It is hard to believe in something or someone. What happened to us, happened in front of the whole world. It is happening in Syria, Libya, Ukraine. Raise your voice against evil. War is not good for anyone. It brings out everything that is bad about human beings. Influence your politicians to provide life for everyone.”

Lessons in Life and Love

The Bosnian conflict teaches us that war can be born between friends. It shows us that prejudice and hatred when unchecked, can multiply and transform into some of the most heinous crimes.

In just a few short days we were given a lesson in humanity.  In resilience. Survival. Strength. Faith. Forgiveness. And hope.

We have been given an insight into the true capacity of the human being. Indeed, there is a capacity to hate and to commit evil. But the overpowering and undeniable strength of the human, is the ability to forgive and love. That despite darkness and death, light and life can prevail.

It is all too easy to fall into the trap that this is simply just history, something that happened 20 years ago. The issues are very real and very current to the modern day crises that face our global community. We must draw on this history and these lessons to avoid being complicit in some of the gravest injustices of our times.