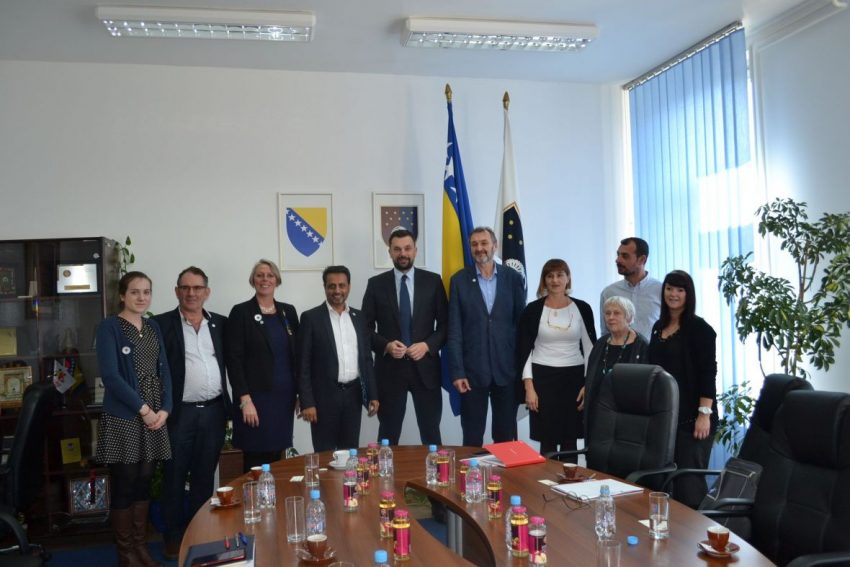 Leading educationalists from the UK took part in our visit to Srebrenica last month. The education-focused ‘Lessons from Srebrenica’ delegation was attended by Kevin Courtney, General Secretary of the National Education Union (NEU) and Louise Regan, President of the NEU. The two union leaders were joined by Joanna De Groot, President of the University and College Union; the History Association’s Melanie Jones and the NEU’s International Solidarity Officer for Nottinghamshire Ivan Wels.

The visit saw the education leaders meet with courageous survivors of the genocide: Bakira Hasečić, Nedžad Avdić and Hasan Hasanović. By listening to first-hand testimony from survivors, the delegates learned how hatred ripped apart communities in Bosnia and caused untold suffering and violence.

To learn more about the situation in Bosnia today the delegates met with the Prime Minister of Sarajevo. The delegation paid their respects to the victims of the genocide at the Potocari Memorial Centre in Srebrenica and learned about the effort to identify the dead at the headquarters of the International Commission of Missing Persons. A tour of Sarajevo’s religious sites allowed the delegates to learn about the city’s rich multicultural heritage.

Rebecca Heron, Education Manager at Remembering Srebrenica and was part of the visit, said:

Earlier this month, the NEU released a statement highlighting the importance of learning about Srebrenica to prevent future atrocities saying:

“We continue to grieve for the families affected, working in partnership with Remembering Srebrenica to commemorate and educate about the genocide. Education has an important, indeed vital, role to play in ensuring that this atrocity is never repeated.”

Read More »
PrevPreviousThe Verdict of Ratko Mladic: In the Media
NextRemembering Srebrenica Comments on Events at the ICTYNext