First ever "We Are One" Upstander Awards held in Gloucestershire 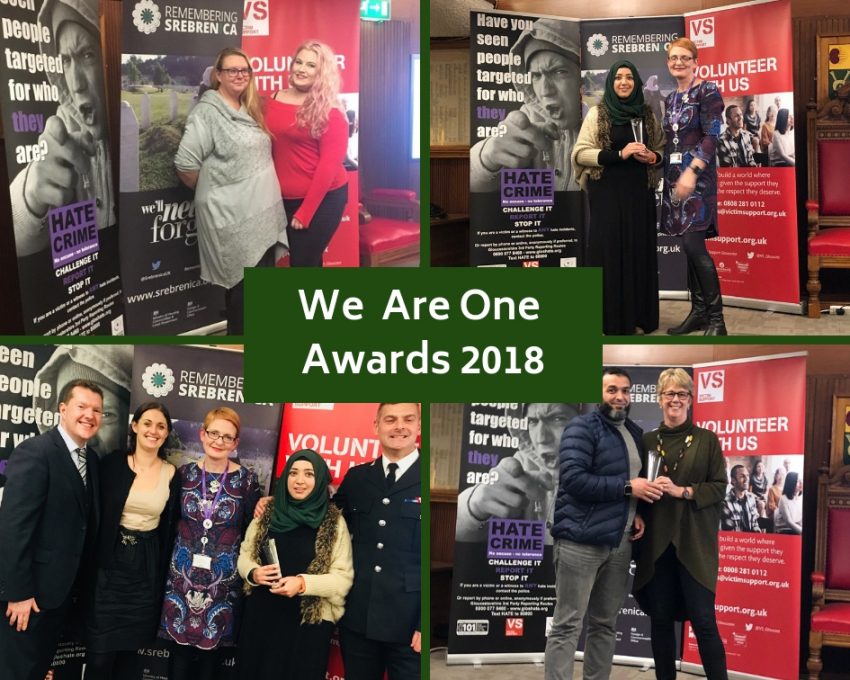 On the 15th October, Gloucestershire held its first ever ‘We Are One’ Awards ceremony which recognised the amazing work of ‘Everyday Day’ heroes who challenge prejudice and strive to make their communities and workplaces more welcoming.

The awards scheme, the first of its kind in the county, was launched in July by charities Victim Support Gloucestershire and Remembering Srebrenica in partnership with the Gloucestershire Hate Crime and Hate Incident Strategic Group.

There were five categories for the We Are One awards: Young Upstander, Young Adult Upstander, Community Upstander, Public Services Upstander and Lifelong Upstander
Reflecting on the process for choosing the category winners and the importance of the ‘We Are One Awards,’ Chair of Remembering Srebrenica’s South West Board, Dr Louise Livesey said:

“As the first awards of its type in Gloucestershire, we were amazed by the number and impressiveness of nominations which just proves how we are genuinely inundated with bad news stories and don’t hear about those who make a stand for tolerance, justice and inclusion. The judges’ task was very hard but the winners were all very worthy – but every nominee is a winner and a role model.”

The category winners of the ‘We are One’ Awards in 2018 were:

During the interview on Gloucester FM  Becca Richardson said

“It can often feel like we are powerless as individuals to make a difference in the face of headlines about the rise of hate crime, but we should never underestimate the difference one person can make. Small things undoubtedly make a big difference and these awards were about promoting that message and celebrating the acts of local people that can be all too easy to overlook. The evening was filled with positivity and very uplifting, an event that we are very keen to do again next year”.