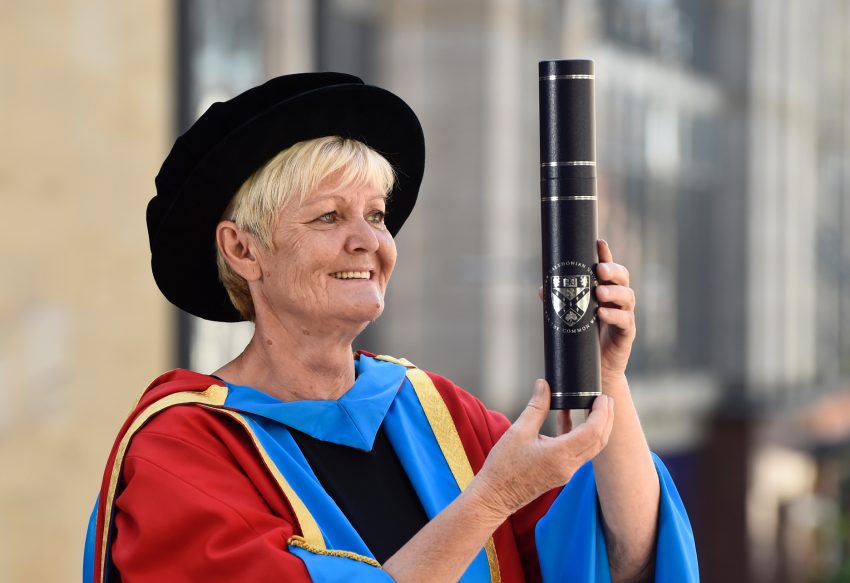 Bakira Hasečić, a survivor of ethnic cleansing from Višegrad in Bosnia-Herzgovina was presented with an honorary doctorate from Glasgow Caledonian University.

This honour was bestowed on Bakira Hasečić in recognition of Bakira’s efforts as a human rights advocate and unifying force for victims of wartime sexual violence. Bakira was presented the award by the recently appointed Chancellor of Glasgow Caledonian University, Annie Lennox.

In April 1992, Bakira and her 18-year-old daughter were repeatedly raped at knifepoint by 15 militia at her home in Visegrad.

Having survived this ordeal Bakira Hasečić founded the Association of Women Victims of War in 2003, to gather evidence for the prosecution of war criminals behind the rape of an estimated 20-50,000 women during the Bosnian conflict.

“If you take away one message from today, let it be this; always fight for what you believe in. In Bosnia, we have been fighting for over 20 years for justice, and everyday our fight continues, but I refuse to be afraid of those who try to silence me”.

“Many people in Bosnia still refuse to acknowledge what happened to us, and many survivors today have to live among the perpetrators of genocide and wartime rape who have not been brought to justice. This is why it is so important and such a blessing to have the support of Glasgow Caledonian University and Remembering Srebrenica. Days like today prove that we can come together to challenge hatred and break the silence.”

On accepting her award, Bakira Hasečić joins fellow Bosnian genocide survivor, Nedžad Avdić, in being honoured by a UK university having both worked with the charity Remembering Srebrenica. Nedžad Avdić was given an honorary doctorate of philosophy by the University of Bedfordshire in April 2017.