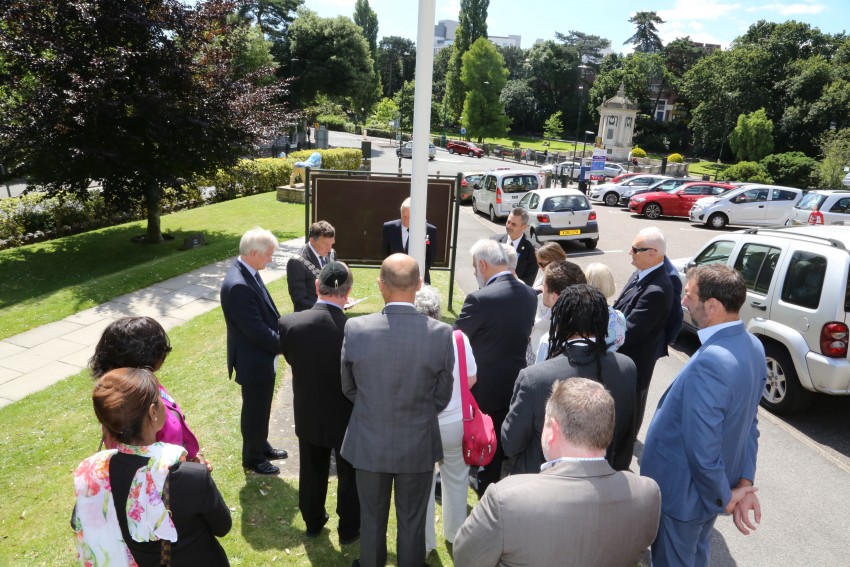 Support for Bournemouth Borough Council’s Srebrenica memorial event was secured from the Leadership of the Council at Executive and Political levels. Participation was secured from key individuals and partners such as the town’s Lord Mayor, members of Cabinet such as the Portfolio Holder for Equality and Diversity, The member Champion, Senior Councillors and the Chief executive and Community Safety Manager.

Chairs of Trade Unions that represent Council staff were also invited to attend as well as the Police and Crime Commissioner and various religious leaders and senior staff from other public sector organisations such as the police.

Other equality practitioners and community members known to be committed to anti-discriminatory practice and equality were also invited to attend and they made it open to all staff and community members. Permission and agreement for the Remembering Srebrenica Flag to be flown above the Town Hall was obtained early on. The Council recognised that supporting the event contributed towards its statutory obligations under the Equality Act 2010, supported some of its equality objectives and provided an opportunity to reassure communities who felt vulnerable as a result of the outcome of the UK referendum on whether or not to remain in the European Union.

The Councils intranet system was used to raise awareness of the atrocities which took place in Srebrenica. A large display was placed in a public space which utilised the resources available on the Remembering Srebrenica website and desk research carried out on the internet.

We have a commitment to progress equality, build stronger communities and a determination to achieve our aim of zero tolerance towards racism, xenophobia and hate crimes in our town. There is also a need for people to remain vigilant and not to become complacent to the where prejudice and hatred left unchecked can lead.

I was also disgusted by the increase in hate crime post Brexit and angered by the fact that bigots thought it had become acceptable to make racist statements in public and abuse people without concern. I felt the clock had been turned back 30 or 40 years.

The media only tends to carry negative stories of Muslims and their communities portraying them as perpetrators of all sorts of atrocities. Reporting is unbalanced and I thought it important that people are educated of crimes which have been committed against those groups and to understand that racism knows no bounds and does care who its victims are.

I wanted people to understand that ethnic cleansing and atrocities on a grand scale had taken just a short flight away from our shores whilst the word stood by. It was clear that the words I saw in Auschwitz- Birkenau that read “Never Again” were just that, words and we had not learnt the lessons of the past.

I had a vision of how the event would be and wanted to balance it between a memorial and a celebration of those who survived. It was important to see and hear their stories. The music in the chamber added to the emotion I wanted to elicit in people for them to understand and make a commitment to use their positions whatever that may be to do something the next time they saw racism, and prejudice being played out before their eyes. I wanted people to see the victims were humans not just numbers. They were sons and daughters, husbands and wife’s. Ordinary folk like we were.

I wanted to engage with leaders from across the board and members of the community. My aim was to get a broad spectrum of people to attending terms of age, ethnic origin, religion or belief or sexual orientation. This was about people not categories.

It brought communities together and strengthened them, it reinforced our commitment to challenge prejudice and discrimination. The event raised awareness of the genocide among the attendees and people were educated and acquired new knowledge.

The way the display was put together was impactful and hard hitting and the music downloaded from our website complimented the film and created a sobering environment in which individuals could read survivors stories and reflect on what had happened and understand how and why.

The books were fantastic as people were hungry for more information about the events.

I felt people understood that there are no innocent bystanders when such atrocities are committed and that all communities have an interest in fighting prejudice and discrimination.

The event had very positive feedback that it was well organised, people thanked me for inviting them and discussed the subject. I needed to debrief some people as they were disorientated by the events.

It was timely to commemorate and reflect on Srebrenica as there was an increase in the number of hate crimes and hate incidents across the UK Post Brexit. It enabled people to stop for a moment and observe the rewards of complacency and ignorance. It inspired me to do more in my role to reassure those who were feeling vulnerable and to challenge bigotry. It allowed the Council to demonstrate its community leadership role raise awareness that ignorance has no boundaries and that prejudice, hate and discrimination is a pathology of the human race the must be eradicated. There is no space to become complacent. It can strike any community at any time. No ethnic group are immune from prejudice.

“It could have been you or me” was a thought that raced through my mind as I looked at the attendees faces. Overall, holding this event reinforced my view that everyone has a right to be treated with dignity and respect. It made me more determined to challenge racism and xenophobic attitudes.” – Sam Johnson, Equality and Diversity Manager at Bournemouth Borough Council